Copyright
Marco Antonio Hernandez Cardona, Julie Zundel
In this lesson, learn what methanogens are. Understand the domain Archaea to which methanogens belong. See where methanogens live and find examples of methanogens. Updated: 12/01/2021

Methanogens are organisms that produce methane as a metabolic by-product under anoxic conditions. They are classified as archaea, a distinct domain of bacteria, and are found in cow stomachs, swamp mud, and other environments where there is no oxygen.

For these organisms, methane is a waste product of their energy production process. Methane is a gas that plays a special role in the Global Warming phenomenon so it is of special interest to mankind. Currently, more than 70% of the emissions of this gas come from the activity of methanogens. Also, methane and other biogases are of special interest to be collected and used as fuel, so it represents an alternative to generate energy and eliminate its potential as a pollutant. That's why studying methanogens and their processes are very important.

Methanogens are found in a wide variety of anaerobic environments (with the absence of oxygen). These include marine and freshwater sediments, biodigesters, hot springs, ruminant digestive tracts (like cows or goats), termites, and human beings. This distribution, however, is dependent on factors such as the availability of substrate(food for methanogens), temperature, pH, and salinity, as well as the abundance of final electron acceptors, such as nitrates and sulfates among others, whose reductions are more favorable than that of carbon dioxide as methane.

The methanogens belong to the Archaea domain. It encompasses unicellular prokaryotic organisms without a differentiated nucleus, as well as bacteria. However, they are living beings with genetic and metabolic characteristics that are closer to eukaryotic organisms, although their evolutionary path is completely different. They can be present in the water of the oceans, in different types of soil, and even in the human digestive tract.

Some archaea, like methanogens, are extremophiles. That means that they tolerate and resist extreme conditions like extreme pH (very acidic or very alkaline conditions), extreme salt concentrations, extreme radiation conditions, high pressures, lack of humidity, and high or low temperatures. Also, methanogens are obligate anaerobes which means that they don't need oxygen to grow and reproduce and they have high nutritional requirements. The process of obtaining energy from these organisms is called methanogenesis and is a process that all methanogens share. In this process, methanogens consume carbon dioxide and hydrogen and produce methane.

In most of their habitats, methanogens are associated with various groups of bacteria to carry out the degradation of matter organic, where methane formation represents the last step of this process. An example of this is hydrogen-producing bacteria. This is called syntrophy, the process where one organism lives off of what another organism releases.

Methanogens are classified into 5 different orders. What they have in common is that they all produce methane, and all are obligate anaerobes. This classification is based upon their differences in physiological properties, the substrates they need to do the methanogenesis, diet, their form, the way they move, and cell structure: 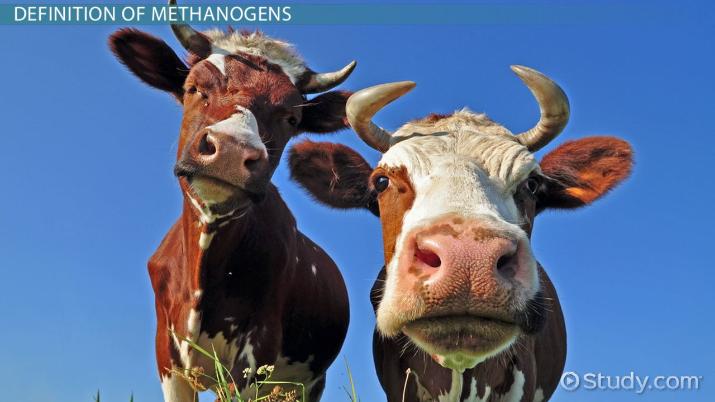 Coming up next: Interpreting Tables of Scientific Data: Practice Problems

Where do Methanogens Live?

Methanogens can be found in:

Methanogens are used in treatment plants to break down waste (organic matter) and produce methane. This methane can be stored and used later to produce energy.

One example of methanogens is the Methanopyrus Kandleri. This organism inhabits hydrothermal vents on the ocean floor and was first discovered in the Gulf of California at a depth of 2000m at temperatures of 84-100 degrees Celsius. The salinity conditions preferred by M. kandleri are between 0.2 to 4% salinity, with an optimal concentration of 2%. The ranges of pH that they tolerate are between 5.5 to 7, while the optimal pH condition for their development is 6.5. These organisms usually form colonies 1 mm in diameter and exhibit a greenish-blue color which is typical of methanogenic organisms.

The human intestine is home to methanogenic organisms of the order Methanobacteriales: Methanobrevibacter smithii, and Methanosphaera stadtmanae. These organisms help metabolize fermentation products such as short-chain organic acids, alcohol, carbon dioxide, and hydrogen inside the digestive tract.

The last example is Methanobrevibacter gottschalkii. This organism was discovered in the feces of horses and pigs. They have a round-bar shape and 0.7 microns in width and 0.9 microns in length. Like all the methanogens, they are obligate anaerobes.

Methanogens are organisms that produce methane as a metabolic by-product under anoxic conditions. They are classified as archaea, one of the three domains of all living beings. These organisms are obligate anaerobes (can live without oxygen) and extremophiles (resist extreme conditions). Methanogens produce methane by the methanogenesis process, using carbon dioxide and other substrates. Some of these substrates are released by other organisms and used by methanogens. This is called syntrophy.

Methanogens are classified into 5 groups, depending on their differences in physiological properties, the substrates they need to do the methanogenesis, diet, their form, the way they move, and cell structure. They can be found in places with anoxic conditions like anoxic sediments, animal digestive tracts, underwater hydrothermal vents, and wastewater treatment plant sludges. These organisms are technologically important for humans because they can be used to break down waste and produce methane that can be used as fuel to produce energy.

What do you mean by methanogens?

Methanogens are extremophile and obligate anaerobe organisms that belong to the Archaea domain and produce methane by the methanogenesis process in anoxic conditions, using substrates like carbon dioxide or hydrogen,

Where are methanogens found?

What do methanogens do?

Methanogens, under anoxic conditions take substrates like carbon dioxide, hydrogen, and organic matter to produce methane by the methanogenesis process. This methane can be collected and used as fuel.

How do methanogens survive?

Methanogens can survive under extreme conditions like high or low temperatures, high pressures, high salinity. They take compounds that other organisms release and under anoxic conditions, they release methane. That is the way they produce their energy.