Copyright
Lisa Baird, Kara Wilson
Learn about metonymy and how it compares to other figures of speech. Discover metonymy examples in literature. Updated: 10/05/2021
Create an account 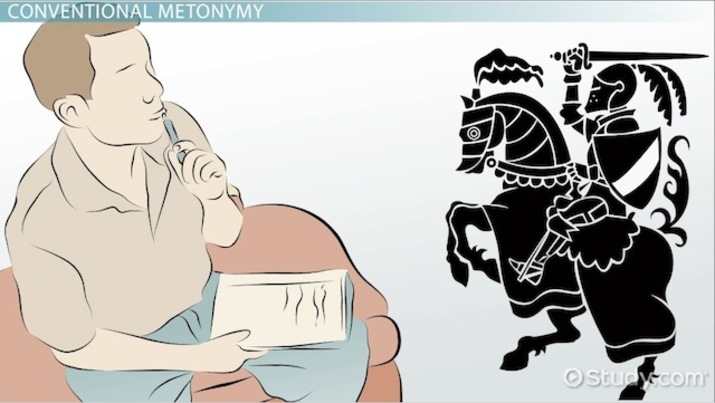 Coming up next: What is a Reflective Essay? - Definition, Format & Examples

Poets and storytellers use figures of speech and imagery to create a picture in a reader's mind. One common figure of speech is metonymy, which means to change the name of something to a different, related name. A metonym is a word that implies or suggests a similarity between two ideas. For example, in the following statement, the word specter is a metonym: "Brian lay beneath the specter, wondering how its radiation would feel."

Here, the use of the word specter suggests a similarity between a frightening machine that produces unseen radiation and a ghost or phantom that, also unseen, is menacing. Using specter instead of machine summons an image of a fearsome apparition in a reader's mind.

From time to time, everyone uses antonomasia without knowing its formal name. Someone might refer to a friend who can see far into the distance as "Eagle Eye," or a little girl with pretty locks as "child of silken hair." These examples show how antonomasia highlights a quality or characteristic that produces a picture in the imagination. Poets and novelists use antonomasia to suggest something charming or significant or real about a person or thing. Readers see that feature when they imagine a character or place or thing.

Sometimes antonomasia calls attention to a person who is part of a group and shares the same characteristics. The person can be part of a class of people but takes on the name of the group: A Buckeye is a person who cheers for the Ohio State Buckeyes.

Metonymy is like synecdoche in that both are figures of speech and both suggest similarities, but the two are different. A synecdoche refers to a part of something to suggest the whole. For instance, when all the sailors on an aircraft carrier are required to help land jets, officers will say, "All hands on deck." The word hands replaces sailors and suggests a picture of sailors' busy hands working on planes and equipment. Synecdoche works as a figure of speech because readers can see how a part of something, hands, suggests the whole, sailors.

Usually, a writer will choose a picturesque part of something to make the whole more vivid in a reader's mind. "I got my first set of wheels," a new driver might say. The word wheels is a synecdoche that stands for a whole car. It is more detailed, though, to refer to shiny hubcaps so listeners can picture that first car.

In the ancient Greek poem The Iliad (circa eighth century CE), when the poet Homer writes, "Achilles is a lion," he is writing metaphorically. Achilles isn't really a lion, but he's brave and fierce in battle. Metaphors help readers make an imaginative leap between the warrior, Achilles, and a ferocious lion. A metaphor suggests a natural similarity between a lion and Achilles, the warrior.

Like a metaphor, a metonym compares two things or ideas, though where a metaphor makes an explicit similarity, as in "Achilles is a lion," a metonym suggests similarity. For example, a student might say, "I have a mountain of homework to finish." The word mountain is a metonym because the figure of speech suggests a stack or pile or heap so big, the task of finishing so arduous, it is like climbing a mountain. A metonym requires a little more effort from readers than a metaphor because they must make a leap of the imagination between a heap of homework and a mountain, as well as between the arduous nature of climbing a mountain and doing homework.

Poets and storytellers know all about helping readers imagine a scene, which is why metonymy in literature is so common. Some of the more interesting uses of metonymy occur in The Chronicles of Narnia by C.S. Lewis. In fact, Narnia itself stands for a faraway place where Peter, Susan, Edmund, and Lucy can become Kings and Queens, Princes, and Princesses, far from the bombing during World War II taking place in London at the time Lewis wrote the story, which was published in 1950. Narnia suggests the possibility of escape from the real world by using the imagination. Escape to Narnia is as easy as opening the door of a wardrobe, suggesting a similarity between a wardrobe and a whimsical trip into a land of fauns and witches, but also a dangerous place (like London at the time) which will, in the end, be set to right through perseverance and bravery. The wardrobe is a metonym for a portal through which the children must go in order to be transformed into their whimsical selves.

An example of antonomasia occurs in George Orwell's story of a dystopian future, 1984: "He tried to remember in what year he had first heard mention of Big Brother. He thought it must have been some time in the sixties, but it was impossible to be certain." The term Big Brother is a name associated with surveillance. In fact, Big Brother is used today to refer to the sense that we are constantly being watched, especially by the government.

Another example of antonomasia occurs in the novel The Great Gatsby by F. Scott Fitzgerald, published in 1925. Jay Gatsby says, "If there's anything that you want, just ask for it, old sport." The term old sport is antonomasia, an epithet or nickname Gatsby uses when he speaks to male characters in the story. Like an English aristocrat, he uses the term to sound upper-class, as if he belonged to the world of the very rich, even though Gatsby is new money and not really part of the wealthy class. Aristocrats may refer to each other as old sport, but not upstarts like Gatsby. The use of the epithet reveals how Gatsby, though he has enough money to join the upper class, can never truly be a part of that world.

Perhaps the most memorable image in The Great Gatsby is the light at the end of Daisy's pier. Gatsby buys a house across the bay from her light so he can see it and think of her. The light of the pier is a synecdoche because it is a small part of the entire estate where the very rich Daisy lives. The light also compresses into a striking image the great distance between Gatsby's life and Daisy's.

Poets and storytellers use metonymy, a figure of speech, to create vivid portrayals of characters and places, allowing the human mind to make associations between one idea and another. Other figures of speech include the following:

Metonymy and metaphor draw similarities between two ideas. Antonomasia renames something with a fitting nickname, and synecdoche replaces one idea with another. They all are figures of speech that help make writing more evocative and memorable.

What is metonymy in simple words?

What is an example of a metonymy?

Brian stared up at the specter of the machine, wondering what its radiation would feel like. 'Specter' is a metonym because it suggests a similarity between a scary machine and a frightening apparition.

Pun Overview & Examples | What is a Pun?

Epithet Examples in Literature | What is an Epithet?

Metaphor Concept, Types & Examples | What is a Metaphor?

Oxymoron Purpose & Examples | What is an Oxymoron in Literature?

Prolepsis Types & Examples | What is a Prolepsis in Literature?