The International System of Units (abbreviated as SI from the French Systeme International d'unites) is the international standard system of measurement. It is commonly known as the metric system, originally developed in France in the late 18th century.

The metric system is based on a factor of 10 or a decimalized system. Prefixes are used to differentiate small from large units. Listed in the table below are the common prefixes used.

The base 10 system of the metric system explains why it is easier to convert from one unit to another. Its base units are in line with defining constants rather than artifacts and material properties, making it possible to reproduce it anywhere accurately. It has been widely used in science and engineering because the common set of standard units makes it easier for scientists and engineers to replicate and review results from other studies. 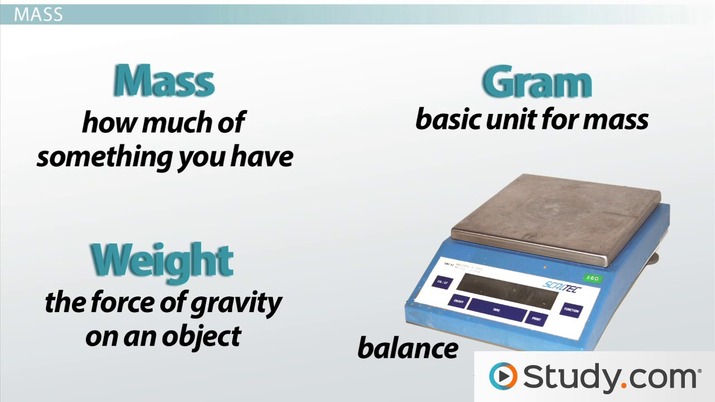 Coming up next: Unit Conversion and Dimensional Analysis

Base Units and Derived Units

Base units comprise all the other units known today. Each base unit is defined by a standard defining constant. What are the base units of the metric system? Refer to the table provided below.

Derived units are combinations of the base units. For example, area refers to the space occupied by a two-dimensional region. It is a product of two lengths; thus, its unit is m{eq}^2 {/eq}. Other examples of derived units are speed (m/s), density (kg/m{eq}^3 {/eq}), and volume (m{eq}^3 {/eq}).

Some of the common metric measurements encountered every day are length, mass, volume, density, and temperature. There are different units used to express these quantities.

Length is a measure of distance. Its SI unit is the meter (m). As a base unit, its technical definition is related to the speed of light in a vacuum at 299 792 458 m/s.

Mass refers to the amount of matter an object contains. Its SI unit equivalent is the kilogram (kg). The previous definition of the kilogram is based on the mass of a platinum-iridium cylinder, but it gradually loses some of its mass, leading to the creation of a more definite and unchanging standard. Today, its definition is tied to the fixed value of the Planck constant at 6.626 070 15 {eq}\times {/eq} 10{eq}^{-34} {/eq} J s.

The most common units of mass (or weight) in the English system are ounce (oz), pound (lb), and ton. These units are related to the kilogram using the conversion 1 kg {eq}\approx {/eq} 2.205 lb. The conversion ratios of these English units are:

Volume refers to the amount of three-dimensional space occupied or enclosed by an object. It is calculated by multiplying the length, width, and height of an object. It is a product of three lengths, making its derived SI unit as cubic meter or m{eq}^3 {/eq}.

Volumes of solids in the English system are given in cubic feet and cubic yards. The equivalent of these units and other common units of volume of fluids such as fluid ounce (oz), cup (c), pint (pt), quart (qt), gallon (gal) are listed below:

Density quantifies the degree of compactness of an object and helps determine whether an object will float or sink in water. It is also defined as the mass per unit volume, making it a derived unit. Since the SI unit of mass is kg and the standard unit of volume is m{eq}^3 {/eq}, the SI unit of density is {eq}\frac{kg}{m^3} {/eq}. Other units of density are g/mL and g/cm{eq}^3 {/eq}.

The relationship between the density, mass, and volume is given by {eq}\rho = \frac{m}{V} {/eq}, where {eq}\rho {/eq} is the density, m is the mass, and V is the volume. If the two quantities are given, then one can easily determine the one unknown quantity. Consider this example: Calculate the density of a wooden block with a mass of 15 g and a volume of 20 cm{eq}^3 {/eq}. Substitute the values for mass and volume in the equation for density, as shown:

Temperature is the quantity that describes the hotness and coldness of an object. It is the average kinetic energy of the molecules comprising the substance or object. Its SI unit is the kelvin (K), defined based on the fixed value of the Boltzmann constant, k, equal to 1. 380 649 {eq}\times {/eq} 10{eq}^{-23} {/eq} J/K.

Aside from the Kelvin scale, the other two most common temperature scales are the Fahrenheit and the Celsius scales. The temperature can be converted from one unit to another using the equations below.

To convert Celsius to Fahrenheit and vice versa, use:

To convert kelvin to Celsius and vice versa:

In any method of converting units, whether from large to small, small to large, English to metric system conversion or vice versa, the table of prefixes and the conversions given in the previous sections are valuable tools. A ratio or a fraction, called conversion factor, is always equal to 1 and shows the relationship between units used in unit conversion. Ensure that the unit that needs to be removed is in the denominator for it to be canceled, while the desired unit is placed in the numerator.

Consider the examples below in converting larger to smaller units.

Convert first the km to m before converting it to cm.

The same method applies when converting smaller to larger units. Consider the examples below.

The International System of Units (SI), commonly known as the metric system, is the standard system of measurement. It is based on a factor of 10 or a decimalized system. Prefixes are used to differentiate large from small numbers. Physical quantities such as length, mass, volume, density, and temperature have the following corresponding SI units: length in meter; mass in kilogram; volume in m{eq}^3 {/eq}; density in kg/m{eq}^3 {/eq}; and temperature in kelvin. Some of the English system units are also defined in terms of the metric system.

A conversion factor is needed to convert from one unit to another. In using the conversion factor, the unit that needs to be removed should be placed in the denominator, while the desired unit should be in the numerator to ensure that the units will be properly canceled.

In this activity, students will be practicing measuring different quantities using the metric system and converting between units. For example, students might measure the length of their desk in meters, then convert it to kilometers. Students will choose at least one object for each quantity discussed in the lesson. To do this activity, you'll need a meter stick, a scale to measure mass, and a thermometer that can measure in Celsius. If you only have a ruler or a Fahrenheit thermometer, you can use a simple internet search to help you convert these values into the metric system. Then, let students convert within the metric system on their own.

In this activity, you're going to be measuring different objects around you and converting the measurements with the metric system. You should choose one object for each category and initially measure it using the units indicated in the table below. Then, convert it to the other units explained in the lesson. The first row has been filled in as an example. Once you're finished, answer the analysis questions below.

Students will probably find length the easiest to measure, since they are all familiar with this linear quantity. Things that students are less familiar with like density or volume might be more difficult. Students should recognize the ease of the metric system, since it is based on a numerical system of tens. Students should also notice that some units are better for measuring certain things. For example, it's easiest to measure a desk in meters, but a larger unit would be needed to measure the distance between cities.

What are some examples of metric measurements?

Physical quantities such as length, mass, volume, density, and temperature have corresponding SI units. These are the following: length in m; mass in kg; volume in cubic meter; density in kilogram per cubic meter; and temperature in kelvin. Prefixes (i.e., centi-, centi-, and kilo-) are used to differentiate between small and large quantities.

What are the basic metric units?

How do you convert metric units to English units?

A conversion factor is used to convert metric units to English units. It is a ratio that shows the relationship between units and is always equal to 1. During conversion, ensure that the unit that needs to be canceled is in the denominator, while the desired unit is placed in the numerator.

What Is the Metric System? | Examples & Units

How to Take Measurements with Scales, Meters & Gauges

How to Perform Basic Operations with Measurements

Metric System Measurements & Units | What is the Metric Unit for Mass?

Distance in the Metric System