Reed Hepler, Toya Stiger
Learn the definition of a mobile network. Learn about the various mobile network types and components, as well as how mobile networks differ from other networks. Updated: 03/18/2022

What is a Mobile Network?

A mobile network is a telecommunications network that provides services via radio signals for mobile phones. It is commonly described as a physical device that can be taken anywhere.

The process through which mobile phones use the services provided by a mobile network can be described in several steps, which will be described in greater detail below:

Through this process, any mobile phone with the correct configurations can connect to receivers all around the world. Examples of a mobile network today include Local Area Networks (LAN), Wide Area Networks, (WAN), and 3G, 4G, and 5G networks.

Mobile Network vs. Other Networks

The meaning of the term ''wireless network'' is ''a network of computers in one or more forms that utilize wireless communication between themselves and each other and/or a server.''

Other networks that are similar to but different from a mobile network include MiFi networks, which is a subgroup of wireless networks, and radio networks, which only transmit radio signals and do not receive.

There are multiple cell phone network types, including 3G, 4G, 5G, LAN, and WAN. The main difference between these systems is that they use different radio networks to transmit signals. All iterations of the mobile data network have four components: a public switched telephone network (PSTN), a mobile telephone switching office (MTSO), cells sites, and mobile subscriber unit (MSU).

A public switched telephone network consists of all telephone networks throughout the world, as all networks, whether they be local, national, or international, communicate with each other to enable communication between members of different mobile network service subscribers. Its format is a system of multiple interlocking components that communicate worldwide, including LANs and WANs.

The PSTN originally used copper wires to provide landline connections over long distances, but today it is virtually completely reliant on digital radio signals and fiberoptics. A call is initiated at one location, which is connected through landline telephone lines and fiberoptics cables to a switching center. When sending a call to a landline phone, a signal is sent from this center, again with the aid of fiberoptics, to other centers until it reaches one closest to the call's destination. Then, it is transferred to a device that converts the call to a signal that is picked up by the subscriber's mobile device.

When a user of this system is communicating with a mobile subscriber unit such as a cell phone, the PSTN transmits the signal to an MTSO.

A mobile telephone switching office contains a mobile switching center that controls calls, manages billing information, and locates subscribers to the cells. In other words, it monitors and controls certain types of data.

The most important aspect of an MTSO is its function as the central hub for mobile switching This occurs when the switching office turns on certain switches that create a path for call or data signals to travel from one point to another. These switches are only turned on when necessary, which significantly decreases the amount of power needed to keep them operating at an optimal rate. This office also automatically switches the cells site upon whose signal a mobile phone is relying. This increases reception and ensures that a user's access to service is as reliable as possible. 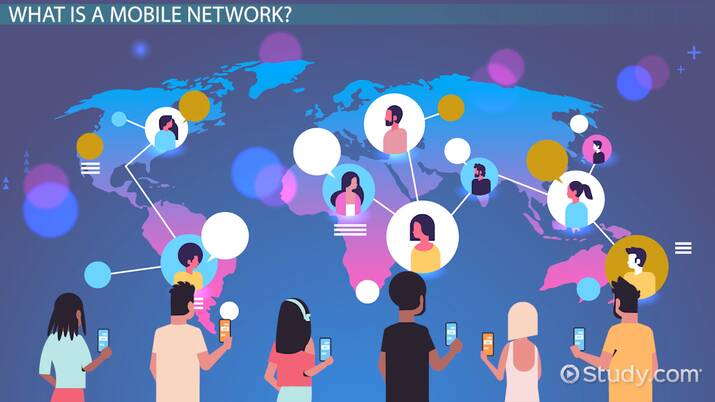 Coming up next: Characteristics of Mobility in Wireless Networking

A signal from a PSTN is carried to the MTSO through a landline cable, which analyzes the origin and the destination of the caller. It then selects which region to send the signal to and transmits the signal using the most appropriate cells sites.

Cells sites are towers that distribute mobile network services through signals that constantly emit from them through antennas. This component of the mobile network lends its name to the term ''cellular network.'' Each of these cells sites serves a broad location, usually overlapping with the area served by other sites. Mobile subscriber units and cell phones utilize the radio signals coming from all nearby cells and switch to frequencies that are not being backed up at the time.

The process used by a cells site is as follows:

A mobile subscriber unit is the ultimate and last recipient of the signal, and can also be the initial sender. This type of device is referred to as a ''transceiver,'' as it both transmits and receives. The most common type of MSU in today's world is the cellular phone.

Cell sites are the component that lent their name to the popular name for mobile networks,''cellular networks.'' Mobile data networks are used to enable calls and data usage from cell phones and other mobile subscriber unit devices throughout the world.

What are the types of mobile networks?

Mobile networks vary based on producer and can be 3G, 4G, 5G, WAN, or LAN, but they all use the same essential system. The first element is a Public Switched Telephone Network, which send signals to the Mobile Telephone Switching Office, which transmits signals to cells sites. Then, the electric call signal is sent via radio signal to mobile subscriber units.

What is a mobile data network?

A mobile data network is a system that transmits and receives radio signals to mobile subscriber devices. It is similar to a wireless network but has unique elements.

What is a Mobile Operating System? - Features & Types

What is Data Tampering? - Definition & Prevention