Modern atomic theory refers to the most current or paradigm theory of atoms. Modern atomic theory is the best explanation atomic physicists have for how atoms look and behave. The basics of the atomic theory are that atoms are the smallest units of chemical matter. Elements are the simplest chemical substances that cannot chemically break down any further. Each element is made up of its own atoms, different from atoms of all other elements. However, atoms can break down further into subatomic particles. Each element is made up of atoms that all have the same number of protons, a positively charged subatomic particle within the atom's nucleus. Additionally, the nucleus contains neutrons, but sometimes in varying numbers between isotopes of the same type of atom. Isotopes are atoms that have the same number of protons but different numbers of neutrons. For example, all hydrogen atoms have one proton, but there is more than one isotope of hydrogen; hydrogen-1 has no neutrons, and hydrogen-2 has one neutron.

Additionally, negatively charged quanta electrons are electrostatically attracted to the positively charged nucleus and therefore surround it. Many simple models of the atom show electrons as particles or spheres that orbit the nucleus like planets orbit suns. However, this representation doesn't provide the most accurate or honest picture of the actual nature of electrons. The modern atomic model instead describes electrons as cloud-like, waves, probability functions, or even undecidable. 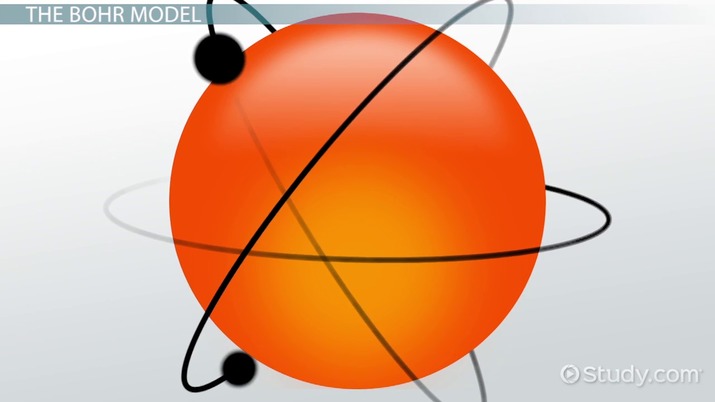 Coming up next: The Atom

The modern atomic model represents atoms containing a nucleus of protons and neutrons and a vague gradient or cloud surrounding it containing the electrons; this is sometimes referred to as the cloud model. The reason electrons are represented as a cloud is because of their behavior being probabilistic. According to experiments done by atomic physicists, electrons behave in a way that makes it impossible to measure both their position and momentum simultaneously. This behavior is wave-like.

Electrons aren't the only things that behave in this strange manner. For the longest time, scientists and philosophers debated the nature of light: was it a wave or a particle. The debate was partially settled when an experiment performed by Thomas Young showed that light behaves as a wave. Young set up an experiment where the light shined through two tiny parallel slits before being emitted onto a surface. When monochromatic light such as a laser passes through two slits, it projects an interference pattern on the surface to which it is cast. This pattern appears as dots or lines that run parallel, with no light in between them, and fade out from a concentrated center.

Thomas young's double-slit experiment demonstrates the wave-like nature of light. As the light passes through two slits, the light propagating from each slit interferes with the light from the other slit. As the light spreads out and intersects itself, it interferes with itself, either constructively or destructively; this is how two sets of propagating waves or ripples behave in still water. When the peak of one wave meets the peak of another wave, they constructively interfere with each other and maintain the wave peak. However, when the peak of one wave meets with the trough or valley of another wave, the waves cancel each other out, and the water's surface goes flat. In the case of light propagating from two slits, the light waves cancel each other out and result in the interference pattern. The areas on the surface the light projects on are dark and lack light if the waves destructively interfere with each other.

After Thomas Young demonstrated light was wave-like, George Paget Thomson attempted a similar experiment using beams of electrons. Electrons, too, were discovered to be wave-like and created interference patterns.

Two more physicists named Erwin Schrodinger and Werner Heisenberg contributed further to the study of quantum mechanics or the nature of subatomic particles. Heisenberg, with other physicists, proposed that this strange probabilistic nature of quantum mechanics was not some momentary obstacle scientists faced before they could determine the true position and momentum of something like electrons. Instead, this non-deterministic nature was the way things behaved at the quantum level. Schrodinger eventually provided a wave equation for electrons which described how they propagate. Because electrons travel or propagate as waves, they don't have an exact position. Therefore, their position and momentum or speed cannot be determined at the same time. This position is known as Heisenberg's uncertainty principle which asserts some mathematical inequalities exist where there is a limit to the accuracy for determining and predicting pairs of physical quantities based on initial conditions. The accuracy in determining one aspect reduces the accuracy of determining another aspect; this is simply the nature of electrons; they are probabilistic functions and not deterministic particles.

Though this sounds confusing, it must be understood that the very nature of all human language is that it developed and evolved by being utilized to describe and explain things and phenomena at a macroscopic scale, or the familiar physical world observed in everyday life, and not the things in the quantum world. Therefore, though it seems counterintuitive for an electron to be in two places at once or interfere with itself, the quantum world is under no obligation to be intuitive and compatible with a macroscopic human language.

The Bohr Model of the atom was a slightly more intuitive model that human language used to describe (however, it was also inaccurate). The subatomic particles in the Bohr model of the atom are all simply particles. Electrons in the Bohr model are particles with deterministic paths around the nucleus of the atom. In Niels Bohr's model of the atom, electrons have stationary orbits around the nucleus. However, Bohr also discovered that electrons orbited nuclei at different energy levels; electrons can absorb and emit frequencies of light when moving up or down an energy level, respectively. Bohr also formulated that the energy or frequency of light emitted or absorbed by an atom's electrons was equal to the difference between two orbital levels for the electron. Schrodinger and Heisenberg's atom model kept this notion of energy levels but discarded the notion of electrons having determined paths.

Concerning Austrian physicist Edwin Schrodinger's model of the atom, Heisenberg's uncertainty principle is put to use so that electrons appear around the nucleus as electron clouds. Electrons appear around the nucleus as probabilistic functions, which appear as gradients; this represents the notion that electrons have no fixed path or static positions and that those same positions are merely probabilities. In the Schrodinger model, electron clouds and orbitals represent regions where electrons have higher or lower probabilities of occupying. Additionally, atoms at different energy states have their electrons occupying different orbitals or energy levels within this model.

The modern atomic model also includes the subatomic particle, the neutron. The neutron is roughly the same mass and size as a proton but does not possess a positive or negative charge but is instead neutral. The neutron was the last of the three main subatomic particles discovered because of its lack of a charge. Both protons and electrons were more easily discovered because of their detectable charges.

Neutrons were discovered by the physicist James Chadwick. Chadwick performed a preexisting experiment where alpha particles (hydrogen nuclei) emitted by radioactive polonium are pointed at and impact either boron, beryllium, or lithium, producing radiation or a radiating particle from the system. Chadwick realized that this particle being forced out of the beryllium exposed to radiating alpha particles was a subatomic particle with a similar mass as a proton. Because an electric field did not influence the particle, it was neutrally charged and dubbed the neutron.

With the use of the Large Hadron Collider and other supercolliders that force hadrons such as protons or neutrons to collide at close to the speed of light, physicists were able to discover multitudes of other particles. Quarks are certain particles or quanta that compose hadron particles, such as protons and neutrons. There are many different kinds of quarks: up quarks, down quarks, strange quarks, charm quarks, top quarks, and bottom quarks. These different quarks have different spins and charges and come together to create different hadron particles.

Overall, the modern atomic theory is the best explanation, and description physicists have for explaining and describing the fundamental nature of the atom and its composing subatomic particles. Atomic theory is composed of a few claims:

Before the modern atomic model were other models such as the Bohr model of the atom, which described negatively charged electrons as particles with determined paths orbiting a positively charged nucleus.

Physicists Schrodinger and Heisenberg contributed significantly to the modern atomic model by calculating how electrons behave as probabilistic functions and have wave-like properties. Schrodinger's equation coincides with Heisenberg's uncertainty principle. It demonstrates that accurately predicting an electron's physical property, such as its position, reduces the accuracy of determining other aspects such as its momentum. Therefore, the modern atomic theory and model present the electron in cloud-like orbitals around the nucleus. Within these regions, there are higher and lower probabilities of finding an occupying electron.

What is Schrödinger's atomic model?

The Erwin Schrödinger model of the atom is composed of the nucleus of the atom which contains protons and neutrons and is surrounded by an electron cloud. This is sometimes called the cloud model. Electrons exist in a "cloud" because they have a probabilistic nature and it is impossible to simultaneously know their position and their momentum.

Who proposed the modern atomic model?

The modern atomic model is the culmination of experiments and research done by a few scientists. Werner Heisenberg and Erwin Schrodinger are most credited for discovering the probabilistic nature of the electron and applying it to the model of the atom. They represented the atom as a nucleus with protons and neutrons, surrounded by a cloud of electrons.