What are Monomers and Polymers?

Living organisms are made of very large organic molecules called macromolecules (-macro is Greek for large or long; it's the opposite of -micro). Most macromolecules are polymers — long strands of repeating subunits. These subunits, or building blocks for polymers, are called monomers. Natural polymers make up most of the cellular structures that compose living beings, but they are not just found in living organisms. Many plastics and other human-made materials that make modern living possible are synthetic polymers composed of monomers that are made and conjoined in laboratories.

How are Monomers and Polymers Related?

The relationship between monomers and polymers is explained in their names. The suffix -mer comes from the Greek for part. The prefixes tell how many parts; mono- means one (a monomer is a single unit, just one building block) while poly- means much or many (a polymer is a string of hundreds or thousands of conjoined monomers).

In fact, specific prefixes can denote the lengths of certain polymers.

Some polymers contain only one type of monomer — for example, the starch that potatoes and other plants use to store energy is made entirely of thousands (or millions) of glucose monomers — and only glucose monomers. Other polymers are copolymers, which contain a mix of different types of monomers. An example of a copolymer is nitrile rubber (used to make hypoallergenic gloves), a synthetic polymer made from a mixture of acrylonitrile and butadiene monomers.

How are Monomers and Polymers Different?

The most important difference between monomers and polymers is that polymers are made of monomers. The inverse — monomers being made of polymers — is illogical and nonsensical.

The other key difference is that monomers are always quite small (usually between 10-50 atoms) while polymers usually contain thousands or even millions of atoms.

The easiest way to understand the difference between monomers and polymers is by analogy. Monomers are always the units used for construction — a Lego block, a bead, or a single train car. Polymers, on the other hand, are the larger structures made by combining the subunits — a Lego city, a necklace, or the Chicago elevated train system. 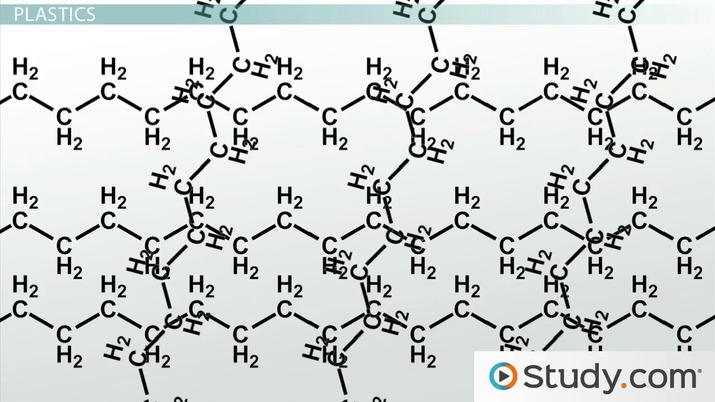 Coming up next: Structure and Function of Carbohydrates

Examples of Monomers and Polymers

Polymers can broadly be split into three main categories:

The most common, and famous, of the synthetic polymers is polyethylene, which is the most common polymer used to make plastics. As the name implies, polyethylene is a polymer of the compound ethylene, formula {eq}C_{2}H_{4} {/eq}. Polyethylene, like most other synthetic polymers, is a long chain of conjoined ethylene molecules, as shown in the picture. The extreme length of the polymer allows for strong intermolecular forces to form between the molecules, creating a strong, durable, yet flexible solid.

Styrofoam is also a polymer, but it is made of styrene monomers. In fact, polystyrene can have different textures depending on how it is made and processed in the lab. To make Styrofoam, the polystyrene has to be extruded as a foam before solidifying, a process that makes the plastic ~95% air.

The monomers adipic acid and hexamethylene diamine combine to make nylon, which makes it a coploymer. In fact, there are several different types of nylon polymers, each with slightly modified monomers. The most common nylon used to make rope is nylon 6 (the six refers to six carbon atoms in its hexamethylene monomer). Nylon is one of the few synthetic polymers to contain nitrogen; for this reason nylon polymers are classified as polyamides.

There are four main categories of biological polymers that are so important to living things they have been called The Building Block of Life. These polymers are so critical for life on Earth they will be covered in several individual lessons in this course.

Carbohydrates are made of monomers called monosaccharides, or simple sugars (sacchar is Greek for sugar). The polymer form of complex carbohydrates is polysaccharides. There are many different monosaccharides — e.g. glucose, fructose, galactose, etc. — but almost all biologically relevant polysaccharides are made of glucose monomers. Humans use the polysaccharide glycogen for energy storage; it contains many branches of glucose that can be broken down quickly. Plants store their glucose as either cellulose, a fibrous polysaccharide used to make tough cell walls, or starch, another branched polysaccharide that can be stored in roots and tubers (e.g. potatoes). The human digestive system can break down starch into its individual monosaccharide glucose components, but it can't break apart cellulose. Cellulose passes completely through the digestive system as dietary fiber.

Lipids are a sort of pseudo-macromolecule polymer. Unlike the other categories, which can extend in length indefinitely (there is no maximum number of monomers in carbohydrate, protein, or nucleic acid polymers), the largest lipids are trimers made of only three monomer units. The monomer for most lipids are fatty acids, which are long, nonpolar, hydrocarbon chains. Three fatty acids can react with glycerol (a 3-carbon molecule) to form a triglyceride, which makes up fats and oils. Sometimes, glycerol will connect two fatty acids with a polar phosphate head group; this creates a phospholipid used to make interior and exterior cell membranes. Most lipids are nonpolar and will not mix with water, but the polar head group of phospholipid makes them both polar and nonpolar at the same time, a condition known as amphipathic.

The proper chemical name for proteins is polypeptides, indicating that they are polymers. Proteins are long, linear strands of amino acid monomers. Humans use only 20 different amino acids, in various combinations, to create thousands (maybe millions) of different proteins. These proteins carry out a diversity of cellular functions. One of the most well-known types of polypeptides is enzymes, which regulate the chemical reactions of the cell. Enzymes are biological catalysts; they are not used up by the chemical reactions they regulate. In fact, most of the polymers of the cell are made by various protein enzymes (for example, DNA polymerase and glycogen synthase are protein enzymes that make other macromolecules), though enzyme do perform other functions. Other protein functions include structural support, transport (both around the cell and into/out of the cell), signaling, and energy storage.

Perhaps the most famous of all the biological polymers is DNA or DeoxyRibonucleic Acid. DNA and its sister-molecule RNA are polynucleotides made from long strands of nucleotide monomers. Each of these monomers has its own component parts: a sugar, a base (A, C, T, G, or U), and a phosphate group. DNA is one of the most stable and least reactive of all the macromolecules; it is meant to faithfully preserve and transmit a person's genetic information across generations. All of the genes encoded in one organism's DNA is called their genome; the human genome is made of 3 billion nucleotide pairs coding for around 20,000 different genes. RNA is less stable that DNA because it only has one strand of nucleotides (DNA has two); RNA's purpose is to carry the sequence of one gene out into the cell so that it can be used to make a certain protein. After the protein has been made, the RNA molecule is degraded into its component nucleotide monomers, which can be reused.

Macromolecules are very large molecules; often thousands or even millions of atoms. Most macromolecules are polymers, which are long chains of repeating molecular subunits called monomers (mono- = one; poly- = many). Two monomers made a dimer, and three monomers make a trimer. Polymers can contain anywhere from four to millions of monomers. Synthetic polymers (human-made polymers) are made using catalysts (chemicals that speed up chemical reactions but are not consumed by the reaction); natural polymers are made by enzymes (proteins that act as biological catalysts). The process of making a polymer is called polymerization.

Examples of polymers include

The four main categories of biologically important polymers are further described in the table below.

What are the 4 types of monomers?

The four monomers that make up biologically important macromolecules are

What is a monomer example?

An example of a naturally occurring monomer would be a monosaccharide like glucose. Many glucose monomers can be joined together to create polysaccharide polymers like starch, cellulose, and glycogen.

An example of an artificial, or human-made monomer would be butadiene, which can be used to create the artificial rubber used in car tires.

What are the 4 main polymers?

There are several other types of synthetic polymers, including plastics, artificial rubber, and nylon.

What are polymers examples?

Examples of natural polymers include

Examples of synthetic polymers include

Enzymes Function & Structure | What is the Role of Enzymes?

Mechanical Advantage of the Wheel & Axle