How Do You Multiply Exponents?

More generally, any exponential expression can be written as {eq}b^a {/eq} where a is the exponent and b is the base. 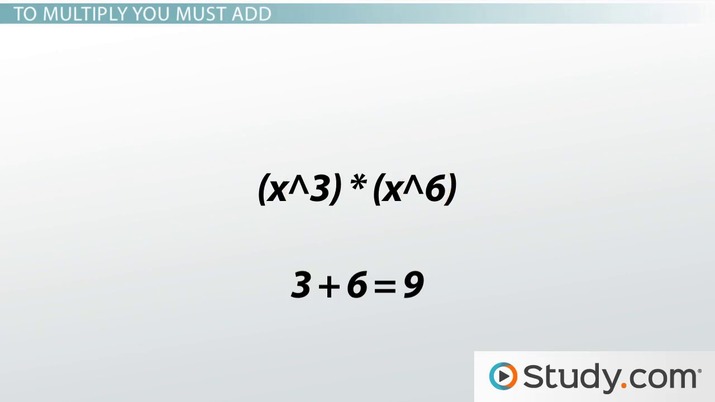 Coming up next: Dividing Exponential Expressions

What do you do when multiplying exponents? Since exponents mean repeated multiplication, a natural question of what happens when you multiply exponents might arise. In this section, the idea of multiplying two bases raised to exponents will be explored. For example, consider the expression {eq}2^5 \times 2^3 {/eq}. It may be tempting here to assume that the 2's multiply together or that the 5 and 3 multiply together, but in fact, neither of these is correct. Instead, lean on the definition of an exponent to rewrite this expression before combining any terms:

Noticing that there are eight total 2's here, this expression can be rewritten as {eq}2^8 {/eq}. This idea can be generalized to show that you add exponents when multiplying like bases: {eq}b^x \times b^y = b^{x + y} {/eq}

The second method of multiplying exponential expressions with different bases is grouping. The grouping method essentially says to rearrange the terms so that the multiplication can be done a bit more easily. Recall the example above of {eq}3^4 \times 4^3 {/eq} Notice that there is one more 3 than there are 4's. So we can combine the same number of 3's and 4's and have one 3 left over. For instance:

More generally, it can be said that {eq}a^x \times b^x = (ab)^x {/eq} or, in words, multiplying different bases raised to the same power means that the bases can be multiplied together first and then raised to that power.

Rule 3: Power of a Power

Rule 4: Power of a Product

Rule 5: Power of a Quotient

This rule is also a consequence of Rule 2.

In Fig 2 we can see all of the exponent rules in one place.

An exponent (also called a power) is a symbol used to denote repeated multiplication. For example, {eq}3^7 {/eq} means to multiply 7 copies of the number 3. In this case, the 7 is called the exponent. The base of an exponential expression is the number being multiplied repeatedly. In this case, the 3 is the base.

Multiplying Exponents | How to Multiply Numbers With Exponents

Exponent Base & Type | What is a Positive Exponent?

Function Application for the Real World

Integral of xe^x Formula, Rules & Steps | How to Integrate xe^x

Writing the Inverse of Logarithmic Functions

Function vs. Relation in Math | How to Find Functions & Relations

What is the Derivative of tan(x)?

Solving the Derivative of ln(x)