Copyright
Joanna Tatomir, April Koch
Learn what a mutagen is. Understand types of mutagens, explore how mutagens cause mutations, and see examples of how mutations affect the real world. Updated: 11/11/2021

What is a Mutagen?

A mutagen refers to any agent found in an organism's environment capable of producing genetic mutations in DNA. Under normal circumstances, DNA replication occurs without the introduction of mutations or changes in the genetic code of an organism. This is due to the presence of DNA repair mechanisms such as base excision repair (BER), nucleotide excision repair (NER), and mismatch repair (MMR). In base excision repair, a damaged base is removed from the DNA during the G1 stage of the normal cell cycle. Nucleotide excision repair occurs during the G1 and G2 stages of the cell cycle and deletes lesions that form on nucleotide sequences in DNA. Even after the cell cycle is complete, mismatch repair can occur after replication to ensure that base pair matching is maintained within the DNA.

However, in some cases, mutations persist in the DNA due to the presence of mutagenic agents. What does mutagenic mean? The term mutagenic is defined as the ability to induce genetic changes in the DNA of an organism. There are many sources of mutagenic agents, including physical, chemical, and biological mechanisms. Some examples of physical mutagens include UV or gamma radiation while alkylating agents and azides represent potential chemical mutagens. Biological mutagens often consist of viruses and different bacterial species capable of initiating changes in an individual's DNA.

Examples of these different types of mutagens and their potential effects on the human body are explored as part of this lesson. 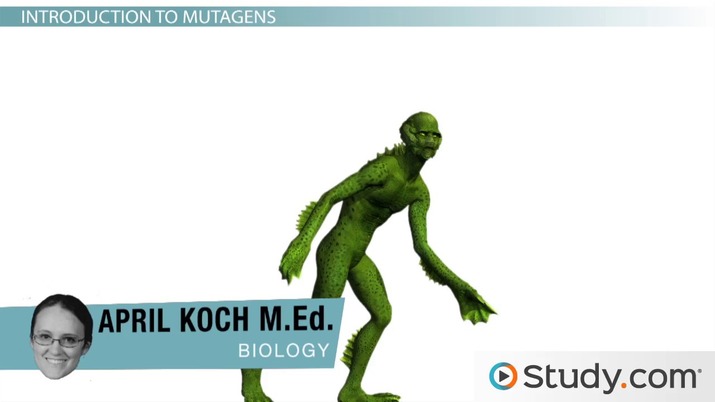 Try it now
Back
Coming up next: Effects of Frameshift Mutations: Definitions and Examples

Types and Examples of Mutagens

Mutagens are often classified based on their origin and their effects upon DNA. There are three basic types of mutagens:

Physical mutagens include ultraviolet and gamma radiation. Both sources induce the creation of free radicals or molecules having unpaired electrons. These free radicals can then cause unintentional bonds to form between bases, such as covalent bonds between thymine molecules. The creation of the thymine dimer prevents the double helix from forming wherever this dimer exists in the nucleotide sequence. The condition xeroderma pigmentosum, in which individuals have an increased risk of skin cancer due to extreme light sensitivity, is caused by the lack of an enzyme needed to remove thymine dimers from DNA sequences.

Chemical mutagens are commonly found in compounds that produce toxicity and concomitant damage to DNA. Alkylators, one type of chemical mutagen, directly impact bases by creating G (guanine) residues resulting in depurination or loss of a purine. This creates a mismatch between base pairs and induces DNA repair mechanisms to allow these mutations to persist in the DNA sequence. Other chemical mutagens like nitrous acid cause base switching in which cytosine is converted to uracil, adenine is changed to hypoxanthine, and guanine is transformed to xanthine. These altered bases still undergo base pairing, even though this often results in miscoded regions of DNA.

Biological mutagens consist of bacteria and viruses capable of producing mutations in DNA. Human papillomavirus (HPV), for example, results in long-term infection in individuals unable to clear the virus from their bodies. Infected tissues are located in the cervix, throat, and other regions of the reproductive tract in men, while women undergo mutagenesis, in which precancerous cells develop in response to the virus.

Some specific mutagen examples include:

How a Mutagen Works

Mutagens create damage to DNA by disrupting the normal replication and genetic repair mechanisms. In healthy individuals under normal conditions, DNA is built by adding nucleotides to the 3' ends of DNA strands. There are at least fifteen different forms of DNA polymerase that facilitate this process by performing replication, repair, and proofreading of DNA. When exposed to a mutagen, errors in DNA replication occur. This results from the replacement of normal human DNA polymerase with Y-family polymerases that bypass DNA repair mechanisms. The main mutagenic effects produced by this switch include an increase in error-prone replication, creation of frameshift mutations, and prevention of genetic replication.

Some specific actions of mutagens include:

Mutations in the Real World

While mutations are often viewed as having a deleterious impact on organisms, in reality, mutations are capable of putting a combination of advantageous and disadvantageous traits in individuals. Beneficial mutations, for example, occur when the introduction of a new trait in an individual leads to increased fitness or the ability to pass these traits onto one's offspring. In humans, for instance, there are genetic mutations that reduce the risk of type 2 diabetes despite the presence of high-risk factors such as obesity and high blood pressure. Other beneficial mutations found in humans are associated with a reduced risk for neurodegenerative disorders such as Parkinson's disease and resistance to infection.

However, there are also instances in which mutations have negative consequences on human health. As mentioned above, exposure to the human papillomavirus (HPV) results in an increased risk for cancers of the reproductive tract in both men and women. When exposed to HPV, some individuals are unable to get rid of the virus from their bodies and instead experience long-term infection. In individuals with harmful mutations to the DNA repair pathways, cells infected with HPV enable the virus to replicate by using these mutations to facilitate viral replication. In turn, this results in the transformation of healthy cells to precancerous cells (carcinogenesis) or the production of cancer cells.

Overall, mutations represent the primary source of introducing new traits into a population. When these mutations enhance the fitness of a population, or the ability to pass these beneficial traits to offspring, natural selection can act upon these traits and facilitate the process of evolution, in which new species are formed. Indeed, mutations represent the primary source of genetic variability and diversity in populations of organisms.

Mutagens represent any agent capable of producing damage to DNA. Three main types of mutagens include:

Mutagens affect DNA by disrupting the normal repair mechanisms that typically detect the presence of errors in DNA production and replication. Moreover, mutagens cause regular human DNA polymerases to be replaced with Y-family polymerases that bypass the normal mechanisms of DNA proofreading and repair. While many mutations are considered harmful to organisms, mutations also represent the primary source of genetic diversity in populations and thus contribute to the process of evolution.

What is a mutagen in biology?

A mutagen refers to any agent capable of producing damage to DNA. This results in the formation of mutations, the primary source of genetic diversity in populations.

What are the three types of mutagens?

There are three main types of mutagens: physical, chemical, and biological. Each type results in damage to DNA during the processes of replication and repair.

Try it now
Back
Create an account
Mutagen Types & Examples | What is a Mutagen?
Start today. Try it now
Biology 101: Intro to Biology

Mutagen Types & Examples | What is a Mutagen?
Related Study Materials

Spontaneous vs. Induced Mutations Overview & Examples | What is Spontaneous Mutation?

Pedigree Genetics & Analysis | What is a Pedigree?