What is a Narrative?

Narratives show patterns and relate them to one another or to specific ideas or themes. The narrative definition includes spoken or written accounts of connected events. Narrative writing is a type of writing that is told in great detail and focuses solely on the practice of telling stories. Its purpose is to tell readers "the whole story". Unlike textbooks and many non-fiction books, which provide us with information, narrative writing, such as novels and short stories, gives us characters, plots, settings, and conflict. 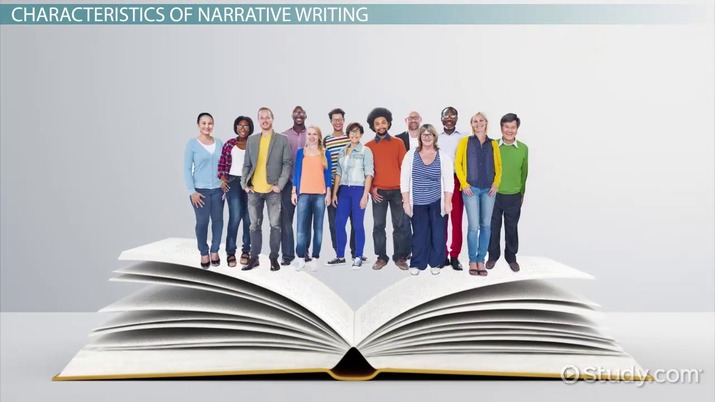 Try it now
Back
Coming up next: Descriptive Writing: Definition, Techniques & Examples

Narratives can be called other recognizable names, such as:

Narratives or storytelling has been around forever and is one of the oldest methods by which people learned to communicate. From cave dwellers, who used pigment to paint on walls to tell stories, to the Egyptians, who carved their stories into walls using hieroglyphics, there have always been stories to tell. The first actual written narratives were in 700 BC and were the "Epic of Gilgamesh" and "The Iliad" by Homer. One of the most famous accounts of oral storytelling that became written stories were the tales written by the Greek slave Aesop. His famous fairytales are loved and read by children all over the world.

Because stories were recorded orally or in writing throughout history, they had the ability to be shared with others through time and space. Through these stories, people were able to learn about cultures, traditions, and historical practices as well as time periods and the people who lived in that time period. Without oral and written narratives, parts of history would have disappeared, and there would be limited knowledge about people's ancestors.

There are many different types of narrative writing including:

Descriptive narratives are narratives that create detailed settings and provide insight into the mood and tone of that setting. The key to this narrative is creating a detailed picture for the reader so that they can visualize the place and the characters who live there. Word usage is very important and should be as descriptive as possible.

In a viewpoint narrative, the story is presented to the reader via the eyes of the narrator. Readers are given a detailed understanding of the feelings, beliefs, and values of the character or characters whose viewpoint is being represented in the story. For example, in Charlotte Bronte's Jane Eyre, Jane is the title character and the narrator who tells her own story from her own perspective.

A historical narrative details a historical event in order from start to finish. It will describe what caused an event and the effects it had on the people involved. It will also concentrate on a particular time period and try to detail that period with as much accuracy as possible. Examples include "Into the Wild" by Jon Krakauer and "1776" by David McCullough.

In a linear narrative, events are told in the order they happened. The author may detail someone's life from start to finish and show how events in their life helped them become the person they became. For example, Anne Frank's Diary of a Young Girl details her life via a diary from before the Nazi invasion till her death at their hands. She talks about her everyday life and how that affects her. The reader gets first-hand insight into her hopes for the future and eventually her sorrow at what life has become for her and her family.

In a non-linear narrative, things are told out of chronological or logical order. The story basically jumps and back and forth. It can include things like flashbacks, flashforwards, dream sequences, or foreshadowing. One great example of this type of narrative is The Time Traveler's Wife by Audrey Niffenegger. In this novel, multiple flashbacks and flash-forwards are used to detail the characters' lives.

There are several common narrative features. They include:

The plot refers to the events that take place in the story. It is basically a sequence of events where every event affects the next one and it ties things together.

Setting refers to the place and time of the narrative. It allows the reader to get a view of the backdrop of the story and also helps set the mood.

Every good story has an element of conflict, which is basically a struggle between opposing forces. Conflict can be internal or external. Internal conflict is when the character struggles with their own beliefs or desires. They basically struggle with themselves. External conflict is when a character struggles with someone or something beyond their control.

Structure is the general order of the narrative. Generally, there is a set order as follows:

Any good author will want to write a story for more than just entertainment purposes. Good narratives will make you think, reflect, and even provide insight into life. Good themes make writing memorable and the impact will extend well beyond the ending of a story.

Writing a good story takes time and practice. There are, however, ways to help writers master this style of writing including:

The hardest part of writing is knowing where to begin. Sometimes, writers need help identifying topics or things to write about. The following are some prompts that may assist writers as they think of topics:

The main types of narrative writing are:

A good narrative will include a:

What is the definition of narrative writing?

Narrative writing is writing that tells a story. It is a way of connecting a series of events in order to tell a good story.

What is an example of a narrative?

There are many well-known examples of narratives. They include novels, short stories, comics, musicals, and plays. Anything that really has a story could be considered a narrative.

How do you write a narrative story?

A narrative story requires a plot, characters, setting, conflict, structure, theme, and point of view. Use a graphic organizer to roughly draft an exposition, rising action, climax, falling action, and resolution. Once that is done, come up with a good hook to begin the story and get the reader interested.