Polymers are found everywhere, from plastic water bottles to nylon, and from keratin in hair and fingernails to strands of DNA. A polymer is a chemical compound whose molecules are bonded together in a repeating chain. Polymer comes from two Greek words meaning "many parts." Those "many parts" are called monomers, the units that create polymers. They are formed through the process of polymerization, where monomers bond together to form chains.

Polymers can be man-made, called synthetic, or they can be natural. But what is a natural polymer? As the name implies, a natural polymer is found in nature; plants and animals. The monomers that makeup naturally occurring polymers are organic molecules, which often include carbon, the element that is in all living things. 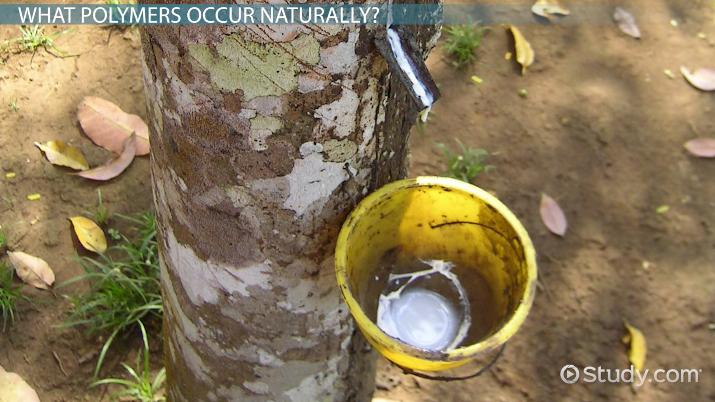 Try it now
Back
Coming up next: Unsaturated Hydrocarbon: Definition & Examples

In contrast, aspects of condensation polymerization include:

Most of the structures of living things are made of natural polymers. There are three main types of structures: polynucleotides, polyamides, and polysaccharides.

Polynucleotides are chains of nucleotides, the basic building block of nucleic acids. DNA, or deoxyribonucleic acid, is a very important polynucleotide since life would not exist without it. The monomers that make DNA are called nucleotides. They are linked by a condensation reaction so that many nucleotides are joined in a long chain. DNA is found in all living things, whether plant, animal, or human. DNA stores the genetic makeup of life, determining a person's physical traits as well as those of any living thing.

Another polynucleotide is ribonucleic acid or RNA. RNA is a linear chain of nucleotides. RNA is also found in all living things and plays an important part in coding and decoding the genetics in DNA. Like DNA, RNA is formed from a condensation reaction.

Polyamides are chains of proteins. One example is keratin, which is found in humans in hair and nails. Wool and silk are also examples of natural polyamides, which are used to create textiles such as clothing.

Polysaccharides are polymers that are chains of sugars, or carbohydrates. They are made of monosaccharide monomers linked by glycosidic bonds, which are covalent bonds usually formed between a sugar or carbohydrate molecule and another carbohydrate. Polysaccharides are formed through condensation polymerization. Sucrose is the chemical name of the monosaccharide monomer in table sugar, and glucose is the name of the monomer found in natural sugars, such as the sugar in fruits and vegetables. Starch is formed from glucose and serves as a short-term energy store in plants and animals. Starch is found in many foods, such as potatoes, cereal, yams, wheat, rice, and other grains. Polysaccharides are an important part of proper nutrition because they provide the complex carbohydrates that provide the primary energy source for many people.

Cellulose is a structural polysaccharide in plants that acts as dietary fiber when consumed. Cellulose is the main component of plant cell walls, and products such as wood and paper are forms of cellulose.

A polymer is a chemical compound whose molecules are bonded together in a repeating chain. Monomers are the units that create polymers. They are formed through the process of polymerization, where monomers bond together to form chains. Natural polymers occur naturally, are found in plants and animals, are created biologically, and break down easily. Man-made or synthetic polymers also exist, which are created in a lab and are not found in nature. There are two main types of polymerization. Addition polymerization is the process used to create most synthetic polymers. This reaction does not produce by-products and occurs with monomers that have double bonds. Condensation polymerization happens when two functional groups, distinct groups of atoms within a molecule, react. This reaction produces a by-product, typically water, and all naturally occurring polymers are created using this reaction type.

There are three main structure types of natural polymers. Polynucleotides are chains of nucleotides, the build blocks of nucleic acids. DNA and RNA, which control the genetics of living things, are examples of polynucleotides. Polyamides are chains of proteins. Proteins are made from amino acids. The functional groups in amino acid monomers can react to form a peptide bond. Some examples of polyamides are keratin in fingernails and hair, cotton, and silk. The third type is polysaccharides, which are chains of sugars or carbohydrates. Table sugar is made of sucrose, and natural carbohydrates are made of monomers such as glucose and cellulose. Polysaccharides are essential to a proper diet as they provide a major part of the energy people need.

What do natural polymers mean?

Polymers are chains of repeated molecules linked together. Natural polymers are those that occur naturally and are found in living things such as plants and animals.

What are examples of natural polymers?

Natural polymers come in many forms. DNA and RNA are polymers, as are cotton and silk. Keratin is a polymer that hair and fingernails are made out of. Many foods have polymers in them that are polysaccharides; chains of sugars such as glucose and cellulose found in grains, fruits, and vegetables.

What are natural polymers made of?

There are three main types of structures found in natural polymers. One is made of proteins, one is made of sugars, and the third is made of nucleotides.

Ferdinand in The Tempest by William Shakespeare | Character & Analysis

Ferdinand in The Tempest by William Shakespeare | Character & Analysis