What Is Negative Feedback?

Essentially, how the mechanism works is that there is a signal that causes the pathway to be turned on. The pathway goes through the steps necessary to create an end product. When enough of that end product is made, either the end product or the effect the end product has on the body acts as an off switch to shut off the pathway. This allows the body to return to normal and restore homeostasis. 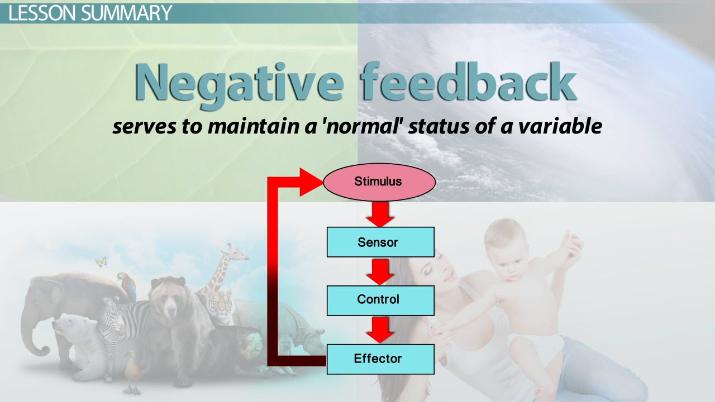 How Does Negative Feedback Work?

The steps of a negative feedback loop rely on the effect of the product of the pathway to go back and inhibit the first step of the pathway that was producing the effect. For example, A produces B which produces C. If levels of C are lower than normal, then A is stimulated and more of B is made which in turn makes more of C. When levels of C are restored back to normal, C can go back to A and inhibit it, which in turn stops the production of C. In this same sense, if C is to make an effect in the body, that effect can also go back up and inhibit A.

Negative feedback loops within the body are meant to keep the body within homeostasis. However, not every situation is able to do so. For example, in the situation of Type 1 diabetes, where there is no insulin production from the pancreas, homeostasis cannot be achieved when there is an increase in high blood sugar. Ideally, the high blood sugar should activate the beta cells in the pancreas to secrete insulin which will then decrease the glucose in the bloodstream by storing it as glucagon in the liver. However, this feedback loop does not function in the situation of diabetes because high blood sugar will not lead to the secretion of insulin. This is why those with Type 1 diabetes must take insulin injections to directly inject insulin into their bloodstream.

- Negative feedback loop is essential to maintain homeostasis within the body. This process allows for the deviation away from normal to be corrected to protect the body from harm.

- Examples of biological processes that are part of a feedback loop are internal body temperature, blood pressure, and blood sugar

- A leads to B which leads to C; C can go back and inhibit A once enough C has been made to reach homeostasis

- There can be disruption to feedback loops such as in the case of diabetes where insulin is not secreted in response to high blood sugar. In this case, individuals are to take insulin injections which allow insulin to directly be within the bloodstream.

What is negative feedback mechanism in homeostasis?

Negative feedback mechanism in the body is essential to maintain homeostasis. When any levels in the body fall out of the normal range, a feedback loop is used to bring the levels back to normal.

What is a negative feedback loop in the human body?

An example of a negative feedback loop within the body is the regulation of blood pressure. When blood pressure falls out of normal limits, depending on the situation, either the sympathetic or parasympathetic nerves are stimulated and the kidneys either excrete more water or retain more water in an effort to bring the blood pressure back to normal.

What is an example of a negative feedback loop in the environment?

An example of a negative feedback loop in the environment is weather temperature. When temperature on the group increases, in order to prevent more sunlight and an even greater increase in temperature, clouds come out and cover the sky.

Which is an example of the body maintaining homeostasis using a negative feedback loop?

What Are the Sinuses? - Definition & Terminology

Structures & Functions of the Endocrine System