Holly Masturzo, Ivy Roberts
Study the 1913 International Exhibition of Modern Art, known as the Armory Show. Learn about how the exhibition introduced avant-garde art to the American public. Updated: 09/18/2022

Advertised as the International Exhibition of Modern Art, the landmark exhibition of European modern art in the United States came to be known as the Armory Show, after the name of the exhibition venue, the 69th Regiment Armory in New York City. Armories are designed to store military weapons, including large-scale equipment like tanks and transport trucks. Thus, as a kind of warehouse space, the 69th Regiment Armory lent itself to being used for exhibition staging.

As a new exhibition of avant-garde art emerging in Europe, not all visitors would have known what the Armory Show of 1913 was or what they likely would see inside. Some visitors were critical of what they found while others were curious and invigorated by the new artistic forms and techniques. The level of interest in the exhibition allowed it to later travel to the Art Institute of Chicago and the Copley Society of Art in Boston.

The Origin and Purpose of the Armory Show

The Armory Show was organized by a group of artists who first formed the Association of American Painters and Sculptors (AAPS) in 1912. The aim of the group, initiated by Walter Pach, Walter Kuhn, Arthur B. Davis, and others, was to promote artists creating work outside of the conventions of academic style. In order to have one's artwork selected for mainstream exhibitions, one typically had to meet the existing expectations for artistry, including subject matter, style, technique, method, and approach to composition. Artists in the early 20th century who began experimenting with different approaches often found themselves shut out of the exhibition circuit. As such, the AAPS wanted to create an exhibition forum where emerging and experimental artists were more likely to have their work selected, shown, and appreciated. The Armory Show was the first major project the AAPS launched and it resulted in the successful introduction of modern art to U.S. public audiences. 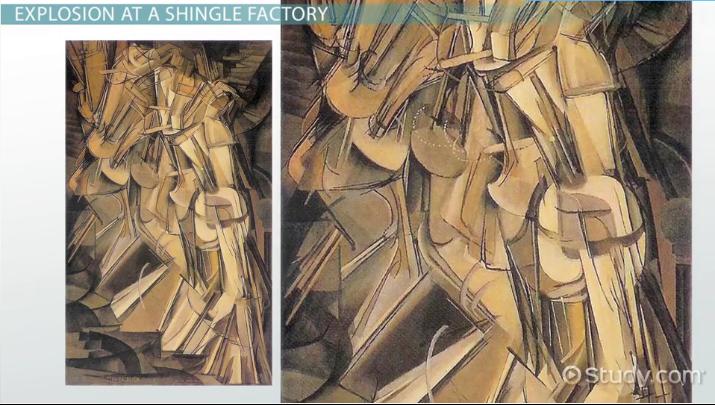 Try it now
Back
Coming up next: Reflections of War in Early 20th-Century Art

Why was the Armory Show in 1913 Significant?

The Armory Show in 1913 was important because the exhibition offered U.S. audiences a visual introduction to emerging modern artistic styles, including Fauvism, Cubism, Futurism, and Expressionism all in one place. Fauvism can be understood as a transition between the favored style of Impressionism that dominated the end of the 19th century and Expressionism, which fully embraced subjective experience after 1910. Fauvism favors the use of bright colors and harsh tones to create simplified compositions that built off the emotional or suggestive representations in Impressionism yet conveyed more boldly or even more aggressively. The early work of Matisse is emblematic of Fauvism at the turn of the century and his Blue Nude (Souvenir de Biskra) painted in 1907 became a talking point of Armory Show attendees.

Likewise, the Armory Show presented American audiences with some of their first looks at the abstract styles of Cubism and Futurism. Cubism emphasizes form, structure, and shape at the expense of figurative detail. Often relying on geometric shapes to suggest the subject matter and reducing the range of the color palette, many Cubist works seemingly flatten the composition into two dimensions while also offering multiple vantage points. In visual art, Futurism built off the abstraction and geometric elements of Cubism, yet emphasizes conveying dynamism and motion to reflect the speed and energy of the increasingly technological, industrial, and modernized world.

Reactions to the Armory Show

One of the most talked about works exhibited at the Armory Show was Marcel Duchamp's Nude Descending a Staircase, No. 2 (Nu descendant un escalier no. 2), painted in 1912. The painting blurs the line between Cubism and Futurism, and indeed, a Cubist-centered exhibition in 1912 in Barcelona declined to include the piece. Duchamp's painting portrays an abstracted human figure walking downstairs, yet instead of a single image frozen in time, the canvas seems to present all at once a succession of split-second images of the process of the figure's movement. Similar to the reaction to Matisse's Fauvist experiment in Blue Nude, Duchamp's innovative composition initially received negative attention at the Armory Show.

Joining the criticism, Theodore Roosevelt famously described Duchamp's Cubism as an "explosion at a shingle factory." Duchamp was not experimenting for the sake of it nor to generate outrage, rather, he, like many modern artists, was curious about the many new technologies in photography and film. His Nude Descending a Staircase, No. 2 can be understood as in visual conversation with the late 19th-century process of chronophotography, which captured a series of movements in phases and intended to help with the scientific study of locomotion in humans and animals. The process also sparked early attempts at creating motion pictures.

For Duchamp, the visual product of the chronophotographic process also suggested an entryway into the language of abstraction of interest to many European avant-garde artists. However, the interest in abstraction was not fully cultivated in American audiences in 1913. Many American viewers first found the abstraction presented by many artists in the Armory Show not only as visually disconcerting or unpleasing but went further to suggest that artists and artistic movements who pursued abstraction risked immorality and the promotion of destabilizing values even to the extent of encouraging anarchy. Such strong reactions indicate the clear visual break many of the artists featured in the Armory Show were making in their approaches to developing new artistic styles. The initial harsh criticism also revealed the hardened sensibilities of American art critics and mainstream art audiences.

The Impact of the Armory Show on American Art

Despite the criticism, after the 1913 Armory Show, Modernism established itself within the artistic traditions of the United States and expanded the aesthetic expectations of American art audiences. Additionally, New York City became a locus for the exhibition and sale of modern art during and after World War II. In short, the Armory Show was transformational for the American art world. Besides the additional showings of the International Exhibition of Modern Art in Chicago and Boston after the inaugural show in New York City, the concept of the Armory Show became an iconic concept in the organization of American art exhibitions. Armory Show retrospectives were organized mid-20th century in several U.S. cities as the audience became acclimated to and appreciative of modernist styles. Later in the 20th century, a group of art dealers used the idea of staging a tribute to the original Armory Show as an organizing strategy for a commercial exhibition of art, and the centennial celebrations of 1913 also were recognized in New York City and other locations.

The 1913 Armory Show painters featured some of the most prominent names who would come to represent 20th-century Modernism. As a whole, the exhibition presented around 1300 works of art by approximately 300 artists. Some of the modern artists featured in the exhibition are household names in the world of art today, including:

An idea formed by members of the Association of American Painters and Sculptors (AAPS), the 1913 Armory Show's official name was the International Exhibition of Modern Art. The exhibition became referred to as the Armory Show since the venue that held the exhibition was the 69th Regiment Armory in New York City. The exhibition introduced American audiences to several emerging styles of modern art that emphasized language of abstraction in contrast to more traditional realist or figurative representations and significantly shaped the development of Modernism in America.

Fauvism, which emphasized the use of bright colors, harsh tones, and simplified compositions, functioned as a transition between Impressionism and Expressionism. The exhibition also presented numerous works in the styles of Futurism and Cubism, including Duchamp's Nude Descending the Staircase. Duchamp's painting was one singled out, along with Matisse's Fauvist work Blue Nude, for criticism. Since the art movements did not follow the traditions of academic art or meet the expectations of the average art viewer, the negative reaction was strong in some circles, with accusations that the forms of abstract art were immoral and promoted social degeneracy. In the case of Duchamp's Nude Descending the Staircase, his work was responding to the technological developments of chronophotography.

Why was the 1913 Armory Show so controversial?

The controversy around the 1913 Armory Show was due to viewers' and critics' reactions to the new modern art styles presented in the exhibition. Fauvist, Cubist, and Futurist art defied expectations not only for what made a painting or sculpture "good," but what art even could be.

What was the Armory Show?

The 1913 Armory Show in New York, also known as the International Exhibition of Modern Art, was the first major exhibition of modern art presented in the United States. The exhibition introduced a number of European avant garde artists, such as Marcel Duchamp and Henri Matisse, to American audiences and helped transform the American art scene.

Who started the Armory Show?

The 1913 Armory Show was organized under the name of the International Exhibition of Modern Art by members of the Association of American Painters and Sculptors (AAPS). Walt Kuhn, Elmer Livingston MacRae, Jerome Myers, and Henry Fitch Taylor first met about the idea in December of 1911.

How did the Armory Show influence American art?

The 1913 Armory Show introduced American audiences to more avant garde styles of art growing in popularity in Europe, such as Fauvism and Cubism. The exhibition challenged audience expectations of realist and figurative approaches to art and set the stage for more experimental styles in modern art to come to dominate the American art scene in subsequent decades.

The Status of Artists in Renaissance Society

The Impact of World Wars I & II on the Arts

Fauvism Characteristics & Style | What is Fauvism?

Surrealism | Characteristics of Surrealism in Art