Copyright
Marco Antonio Hernandez Cardona, Betsy Chesnutt
Who is Niels Bohr? In this lesson, learn about Niels Bohr and his contributions to the atomic theory. Understand the Bohr atomic model and why he received the Nobel Prize for his discoveries. Updated: 11/15/2021

Niels Bohr was a Danish physicist, considered one of the most dazzling figures in contemporary physics and, for his theoretical contributions and practical work, as one of the fathers of the atomic bomb, he was awarded the 1922 Nobel Prize in Physics.

Despite contravening principles of classical physics, his atomic model, which incorporated Rutherford's model of the planetary atom and the notion of quantum of action introduced by Planck, made it possible to explain both the stability of the atom and its radiation emission and absorption properties.

Who was Niels Bohr?

Niels Bohr's full name is Niels Henrik David Bohr. He was born in Copenhagen (Denmark) on October 7, 1885. His father, Christian, was a professor of physiology at the University of Copenhagen. His mother, Ellen, was of Jewish origin, belonging to a prominent family in banking circles. His initial education took place at the Gammelhom Gymnasium in Copenhagen. There he coincided with his younger brother Harald, a brilliant young man who soon proved to be a marvel of mathematics and football. While Harald played as a midfielder, Niels defended the goal and it is said that he dedicated himself to writing formulas on the sticks, a custom that led to his best stretches and his worst blunders. Once in college, both brothers came to play in the Danish first division with Akademisk Boldklub (a soccer club) and Harald played the London Olympics in 1908 with the Danish team, winning the silver medal.

Niels Bohr studied physics at the University of Copenhagen, where his father directed the area of physiology and where he obtained his doctorate in 1911 with a thesis on the theory of the passage of particles through matter. That same year he moved to the University of Cambridge to study nuclear physics at the famous Cavendish Laboratory, led by JJ Thompson, but due to strong theoretical differences with him, he soon moved to Manchester, where he began working with Ernest Rutherford, focusing primarily on the activity of radioactive elements.

In 1916, Bohr was hired by the University of Copenhagen as a professor of physics, and in 1921 he was appointed director of the Institute for Theoretical Physics (a position in which he would remain until his death). There he carried out important studies on the foundations of quantum mechanics while studying the composition of the nucleus, their aggregation and disintegration, thus also managing to justify the transition processes.

Upon his death, which occurred November 18, 1962, his body was interred at the Kirkegard Assistens in Norrebro in Copenhagen. In his honor, a chemical element from Mendeleev's table was named, Bohrium, present among the transuranic elements with the atomic number 107. 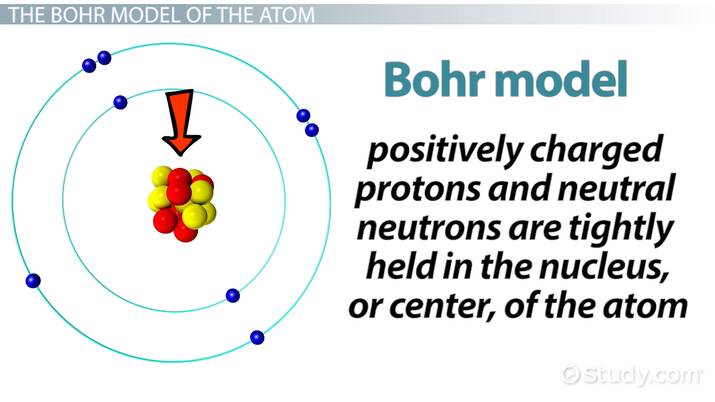 Try it now
Back
Coming up next: Who Was John Dalton? - Biography, Atomic Theory & Discovery

What did Bohr Discover?

After the scientific contributions of John Dalton, JJ Thompson, and Rutherford's model, Niels Bohr proposed his own atomic model in 1911. The Bohr Atomic model states that atoms have different electronic configurations in which electrons move in circular orbits around the nucleus. The Bohr model resembles the planetary model of Copernicus, with planets describing circular orbits around the Sun. In this case, the electrons can only orbit by certain allowed orbits.

In other models of atoms prior to the Bohr model, it was stated that charged protons (+) were in the nucleus of the atom and that electrons circulated in circular orbits around the nucleus. Bohr studied the motion of electrons orbiting the nucleus in atomic theory.

In 1913, Niels Bohr proposed Bohr's theory using the spectral lines of the hydrogen atom and Planck's quantum theory. In light of this information, Bohr's postulates can be summarized as follows:

However, Bohr's atomic model had some mistakes that further discoveries revealed:

Other Contributions and Discoveries

Bohr showed that the chemical properties of the elements result mainly from the behavior of the electrons occupying the highest stable orbit; these are called valence electrons. In doing so, he explained much of the structure of the periodic table and founded a new scientific discipline: quantum chemistry. Bohr's concept of complementarity, about which he wrote in a series of essays between 1933 and 1962, states that an electron can be viewed in two ways, either as a particle or as a wave, but never both at the same time.

Bohr formulated the theory of the composite nucleus in 1934 and 1935 and published it in 1936. His idea was that when a neutron enters a nucleus, it repeatedly collides with a large number of existing neutrons and protons, not just one of them. The result is a semi-stable composite core. This nucleus is in a high-energy state as a result of collisions and loses this energy in different ways, such as losing a neutron or emitting gamma rays.

Niels also proposed the liquid drop theory that stated that a drop of liquid can deform from its basic spherical shape and a large drop of liquid can crumble into two new drops. Similarly, a large atomic nucleus, such as uranium, could crumble to form two new atomic nuclei: this is nuclear fission, the power source behind the uranium atomic bomb and the uranium power plant. The liquid drop model had its greatest success in explaining the properties of heavy nuclei, such as uranium.

In 1939, when Denmark was occupied by the Nazis, Bohr took refuge in Sweden to avoid being arrested by the German police, given his Jewish origins; shortly after he moved to England to finally settle in the United States, where he lived for about two years, as did scientists such as Enrico Fermi and Albert Einstein, among others. There he worked on the Manhattan Project, whose aim was the creation of the atomic bomb, until the explosion of the first model in 1945.

In 1922 he was awarded the Nobel Prize in Physics in recognition of his work in the field of quantum physics. This annual Prize is given by the Royal Swedish Academy of Sciences to nominated candidates that made important and relevant contributions to the field. Apart from the recognition of their work, this award provides an economic stimulus He also received, in 1926, the Franklin Medal of Physics, and he was the first to receive, in 1958, the Atoms for Peace award.

After the war, Bohr returned to teach at the University of Copenhagen, where he pledged to promote the peaceful use of atomic energy and the reduction of the use of weapons with atomic potential. Bohr was one of the founders of CERN (European Organization for Nuclear Research), as well as being president of the Royal Danish Academy of Sciences. This institution is currently one of the most important sites for research, where more than 10,000 scientists from all over the world collaborate operating the Large Hadron Collider (HLC), the largest and most powerful particle accelerator in the world and the one with the highest energy, to study the particle physics.

Niels Bohr (born in 1885) was a danish physicist who made fundamental contributions to the field. He studied at the University of Copenhaguen and got his doctorate in 1911. His main contribution was, influenced by Thompson, Dalton, and Rutherford, the Bohr's Atomic Model, which states that atoms have different electronic configurations in which electrons move in circular orbits around the nucleus. The Bohr model resembles the planetary model of Copernicus, with planets describing circular orbits around the Sun. Although with the advances in science some mistakes in his model were noted, his discoveries were the foundations for the quantum chemistry discipline. He also proposed the theory of composite nucleus and the liquid drop theory.

He was awarded in 1922 the Nobel Prize in Physics in recognition of his work in the field of quantum physics. He was the first scientist to win the Atoms for Peace Award in 1958. After leaving his homeland because of World War II, in the U.S. he developed, with other researchers, the Manhattan Project, with the aim of creating the first atomic bomb. He was one of the founders of the CERN, which currently is one of the most important research sites. An element in the periodic table, Bohrium, was named after him. He died in 1962 in his native Copenhaguen.

What was Bohr's discovery?

What is Niels Bohr known for?

Niels Bohr is a physicist that is know for his contributions to quantum physics. He proposed his own atomic model, the theory of the composite nucleus, the liquid drop theory and worked in the Manhattan Project. He also won the Nobel Prize in Physics in 1922 and is one of the founders of CERN.

Who is Niels Bohr and what did he do?

Niels Bohr is a danish Physicist who made significant contributions to the field. He proposed his own atomic model which is based on the Dalton, Thompson, and Rutherford studies. He also built the foundations of quantum chemistry, with theories and models that later were the base to nuclear research.

Why did Bohr win the Nobel Prize?

The Nobel Prize in physics is given each year to nominated candidates that make relevant contributions to the field. In 1922 Bohr was awarded this prize for his contributions to quantum physics.