Copyright
Daniel Cole, Christopher Muscato
Who is Friedrich Nietzsche, and who is the "Ubermensch"? Learn about Nietzsche's background, his creation of the Ubermensch, and the misconceptions that have taken place about it. Updated: 11/30/2021

Who is Friedrich Nietzsche?

Friedrich Nietzsche was a 19th-century German thinker whose work engaged with a variety of branches of philosophy, as well as art and language. His work is critical of rationalist traditions, and he often took aim at the works of Immanuel Kant and Plato in addition to his social critiques of religion. One of the most debated and misunderstood parts of Nietzsche's theory is his idea of the Ubermensch, which can be translated as the superman or the overman. "The Ubermensch" is a figure to be used as an ideal for humanity and not a particular individual. 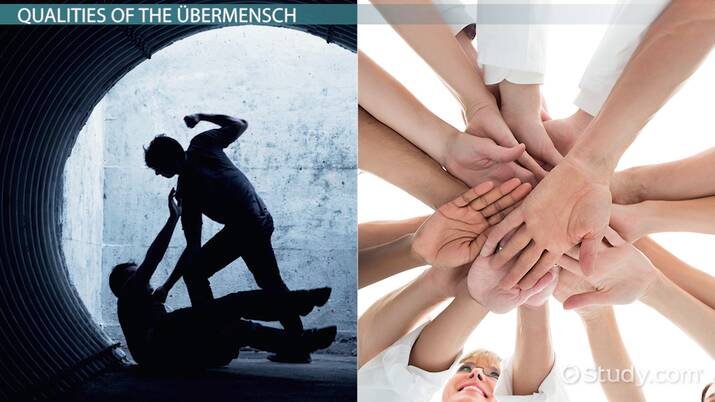 Try it now
Back
Coming up next: Nietzsche's Genealogy of Morals: Summary & Analysis

What is the Ubermensch? Nietzsche's Ubermensch, or Nietzsche's superman, is a creative individual who does not merely follow or obey the laws of others, even the laws of God. The Ubermensch's meaning, then, is a meaning of creation, both the creation of self and of the world. Nietzsche does not envision any single individual or social group to be supermen or even fated to become supermen. It is an ideal to strive for.

Further, such a transformation would not only mean human individuals recreating themselves but also recreating society. Or in other words, because this kind of new morality makes essential reference to the subjectivity of humanity, it presumably does not have the same stagnating and alienating effect of objectivist morality, as found in most religions and other authoritarian organizations. References to any kind of commanding god or objectivist morality are jettisoned in the moral system of Ubermenschen (supermen).

Nietzsche's presentation of the Ubermensch does not involve a new catalog of values and virtues so much as it transforms how some values and virtues should work. For instance, chastity should not be a result of a general condemnation of bodily pleasure. Instead, whether one is chaste should be a matter of how it affects the strength of the person and society as a whole.

The Ubermensch is the idea of a humanity that, upon dispensing with objectivist morality, has overcome its own nihilism to create values and thereby recreate itself. Nihilism, for Nietzsche, is the collapse of values that leads to stagnation and sickness. Nihilism is defined by a rejection of the belief in values and meaning in life. It is a result of a religion that demands humans renounce their bodies and pleasures for the sake of an otherworldly heaven. Such a set of values severs humans from the world and ultimately from themselves, and thus those objective "highest" values devalue themselves. The brief thrust of Nietzsche's argument is that by establishing values as objective and otherworldly, traditional religions set the groundwork for people to reject values altogether and to stop striving to realize their values.

Much of Thus Spoke Zarathustra is devoted to diagnosing the nihilism that emerges from traditional religion as well suggesting elements of a cure, namely, a healthy, creative morality. In this book, Nietzsche suggests that God is dead and humanity has killed him. This is not a claim about murdering a divine entity; it is a claim about how objectivist values disintegrate and lose their ability to guide human life. This is not to say that the Ubermensch will reject or invert every value offered in traditional religion in morality. Instead, Ubermenschen change their relationship to values.

Here are some characteristics of the Ubermensch:

Misconceptions and Negative Uses of the Ubermensch

In part because of the literary presentation of the idea of the Ubermensch, it has been misinterpreted and appropriated for purposes that run contrary to Nietzsche's intentions. Most notably, the Nazi party appropriated the idea of the Ubermensch, which was in part facilitated by Nietzsche's own sister (who had been in charge of his estate after his mental state deteriorated).

The exploitation of the idea of the Ubermensch hinges on the idea that society has become sick and someone has to take charge and transform it. This basic idea is genuinely Nietzschean. Nevertheless, the Nazi ideology runs contrary to suggestions Nietzsche makes about the Ubermensch. For one thing, Nazi ideology focuses on race and nationality, which for Nietzsche would be an objectivist illusion about values. No "natural" feature of the universe can do the work of a healthy morality since values must be created. Thus, Nietzsche would not have approved of the Aryan race as supermen.

Second, while Nietzsche is critical of traditional morality and its absolute condemnation of aggression, he certainly does not advocate for systemic violence or domination. In fact, he is suspicious of the desire to punish and to use violence. In sum, both a blanket condemnation and a blanket celebration of violence would run contrary to Nietzsche's intentions.

Third, the notion of the Ubermensch is more of a prophetic goal rather than something to be empirically achieved and recognized. The Nazis thinking that they had achieved the status of supermen, whether by virtue of their race, nationality, or even their own efforts, denigrates the notion of Ubermensch as an ideal.

We should finally note that anarchists have, at times, claimed Nietzsche's Ubermensch for their purposes. The critique of traditional religion and the focus on creativity seems like it could imply a rejection of institutions and power structures more generally. But this is not the case for Nietzsche. His notion of the Ubermensch involves transforming society and orienting it around values that enrich human life rather than weaken it. Such a society would still have power structures, but those structures would not aim at safety and conformity. Instead, they would focus on strengthening individuals such that they can take on new projects and augment their abilities in service to society and humanity.

Friedrich Nietzsche was a German 19th-century thinker who developed the idea of the Ubermensch. Nietzsche's idea of the Ubermensch, or the superman, is an idea of humans who create their own values based on their experience of life. He presents this idea prominently in Thus Spoke Zarathustra. Such an idea is explicitly meant to be an overcoming of the nihilism that follows the disillusionment with the objective morality of traditional religions, e.g., Christianity.

The morality of the Ubermensch is defined not by any catalog of unchanging values but rather by esteeming those values and virtues that promote a better society based on people's lived experiences and changing circumstances. The focus of the superman's morality is on the earthly world rather than some supersensible, purely spiritual world. Moreover, Ubermenschen break with society's objective morality to create their own values.

The idea of the Ubermensch has been inappropriately adopted by Nazis and anarchists, as Nietzsche does not endorse some given race or absence of power system as a source of new morality.

Did Nietzsche think he was Ubermensch?

There is no evidence that Nietzsche thought of himself as an ubermensch. The concept of ubermensch appears in his work as something that will emerge (or that one could hope would emerge) rather than a status that some person or group of people have already attained.

What is the Ubermensch theory?

The theory of the ubermensch is that one day some people will have the resources to overcome nihilism and create new values. This new grouping of humans will be able to affirm their bodies and the world, rather than turning away from it, like members of traditional religions (e.g., Christianity and Buddhism).

What is the point of Ubermensch?

The point of the ubermensch is to indicate that there are other kinds of relationships to values rather than simple obedience. Nietzsche polemically suggests that a more creative relationship to values may be healthier and more noble than simply obeying objective rules (for instance, as laid down by a transcendent god).

The Birth of Tragedy by Nietzsche | Background, Summary & Analysis

Nihilism vs Existentialism | What is Nihilism?

Conflicts in Crime and Punishment

The Birth of Tragedy by Nietzsche | Background, Summary & Analysis

Nihilism vs Existentialism | What is Nihilism?

Conflicts in Crime and Punishment