What Is Nitrogenous Waste?

Not all organisms can efficiently remove ammonia from the body, requiring the chemical formula of ammonia to be modified into a less toxic form. An organism must live in a marine environment to dispose of nitrogen through ammonia. These marine organisms are constantly surrounded by water, which is necessary to excrete this nitrogenous waste. Organisms that excrete ammonia are referred to as ammonotelic.

The types and forms of nitrogenous waste that are excreted vary between different species. As mentioned above, ammonia is the most basic form of nitrogenous waste. The molecular formula of ammonia is {eq}NH_3 {/eq}, which means that it consists of one nitrogen atom and three hydrogen atoms. Ammonia is produced by the cells within the intestines, liver, and kidneys. In the body, the liver uses ammonia to form urea, which is not as toxic.

Increased levels of ammonia can be very dangerous to the body and can cause low energy levels, confusion, and in severe cases, coma. The normal level of ammonia in the blood is 10 to 80 milligrams per deciliter for adults. Although ammonia can be excreted by marine organisms, it cannot be excreted in its basic form by mammals, birds, or reptiles. The additional types of nitrogenous wastes include: 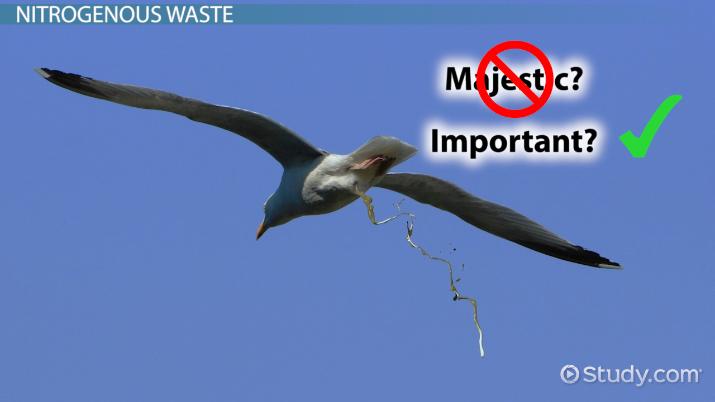 Coming up next: Excretory System

In mammals, nitrogenous waste is excreted in urine as urea. Urea is the byproduct of ammonia; however, it is less toxic and does not require as much water to remove it from the body. Mammals that excrete urea are referred to as ureotelic. Examples of mammals that excrete nitrogenous wastes as urea are humans, dogs, and cats. The urea cycle refers to the process of removing ammonia from the blood by forming urea. To convert ammonia into urea, five different enzymes are utilized in the process. The chemical equation of ammonia to urea is as follows:

The first and second chemical reactions of the urea cycle begin in the mitochondria of a cell, whereas the last three steps occur in the cytoplasm. Urea is made by the cells in the liver and is excreted through urine. If the urea cycle does not function properly, hyperammonemia can result as a buildup of ammonia. Blood concentration of urea is referred to as blood urea nitrogen, or BUN, and is measured to evaluate kidney function. A normal level of blood urea nitrogen is between 7 to 21 milligrams per deciliter for adults. High levels of nitrogenous waste in the blood, such as urea, can be associated with impaired kidney function.

In birds and reptiles, nitrogenous waste is processed and removed as uric acid. Uric acid is a byproduct of ammonia; however, it is less toxic than both ammonia and urea and requires minimal water to remove it from the body. The uric acid cycle is more complex and requires higher amounts of energy than the urea cycle. Although more complex, the uric acid cycle is beneficial because it reduces the need for water.

Birds and reptiles that excrete uric acid are referred to as uricothelic organisms. Examples of birds and reptiles that excrete nitrogenous wastes as uric acid include doves, eagles, iguanas, and snakes. These uricothelic organisms excrete uric acid in feces, which presents as a white paste or powder. Unlike mammals, reptiles need to process ammonia as uric acid because they lay eggs with hard shells. If ammonia was not converted into uric acid, it would accumulate inside of the egg, which would be fatal to the embryo.

Nitrogenous wastes refer to any waste product that is nitrogen-based. The basic process responsible for creating nitrogenous wastes is the breakdown of proteins into amino acids. The remaining amino acid forms ammonia, which is the most basic form of nitrogenous waste. Ammonia is highly toxic and requires large amounts of water to remove it from the body. Due to its toxicity and requirements to remove it from the body, an organism must live in a marine environment to dispose of nitrogen through ammonia. Ammonia can be very dangerous in high amounts, especially to the brain. High levels of ammonia can result in confusion, lack of energy, and coma.

For ammonia to be processed and removed from the body in mammals, it must be converted into urea. Urea is a byproduct of ammonia and is less toxic; it does not require as much water to be removed from the body. Urea is produced in the liver and excreted in urine. For birds and reptiles to remove ammonia from the body, it must be converted into uric acid. Uric acid is a byproduct of ammonia that is less toxic than both ammonia and urea, and it requires a minimal amount of water to remove from the body. Reptiles must process ammonia as uric acid because they lay eggs with hard shells. Uric acid is not as harmful as ammonia, therefore, buildup of uric acid within an egg would not harm the embryo.

What is nitrogenous waste in urine?

Urea is a nitrogenous waste that is excreted in urine. Ammonia is converted into urea, which is less toxic and requires less water to remove from the body. Urea is created by cells within the liver.

What are the two types of nitrogenous waste?

What is Metabolic Waste? - Definition & Products

Aestivation Overview & Examples | What is Aestivation?