What is The Northwest Ordinance

'An Ordinance for the Government of the Territory of the United States, North-West of the River Ohio,' most often referred to as The Northwest Ordinance, was passed by the Confederation Congress on July 13, 1787. It passed on a vote of 17-1. The Ordinance contained 14 sections dealing with various practical issues such as land ownership and estate planning, creating executive, judicial and legislative positions and responsibilities, and maintaining a militia. The Ordinance also contained six Articles, some of which provided a template for some of the Bill of Rights adopted as amendments to the 1789 Constitution: freedom of religion in Article I, and trial by jury and habeas corpus in Article II. Article IV allowed for free access of inhabitants to the navigable waters flowing into the Mississippi and St. Lawrence Rivers, Article V established that at least three and no more than five states could be created out of the Northwest Territory, and Article VI banned slavery in the Northwest Territory but allowed for escaped slaves to be returned to their slave owners. 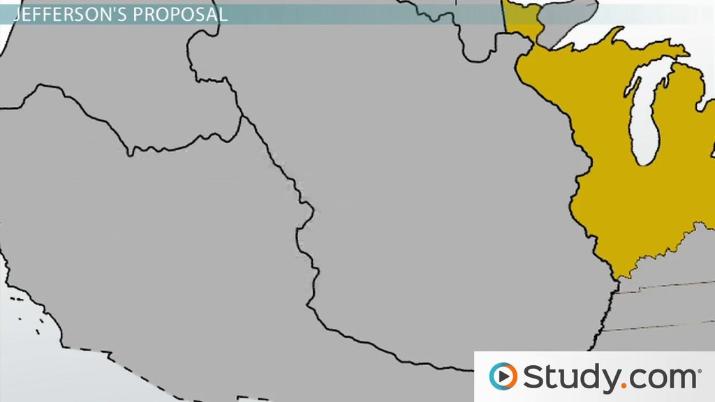 Coming up next: The Two-Party System: Definition, Advantages & Disadvantages

The Northwest Territory was land northwest of the original thirteen colonies. The territory comprised an area bordered by the western borders of the current states of West Virginia and Pennsylvania to the east, the Ohio River to the south, Lakes Erie, Huron and Superior to the north and the Mississippi River to the west. The current states of Ohio, Michigan, Indiana, Illinois, Wisconsin were all part of the Territory as well the northeastern "arrowhead" section of the state of Minnesota.

The Northwest Territory was one of the pressing issues that were addressed in 'The Definitive Treaty of Peace between His Britannic Majesty and the United States of America,' also known as the Treaty of Paris that ended the American Revolutionary War.

The American commissioners, Benjamin Franklin, John Jay, John Adams, and John Hartley negotiating with the British, demanded France and Spain be excluded from the treaty and that King George III recognize the United States as a sovereign nation. Most of the new American states had claims to land reaching all the way to the Mississippi River, great parts of which were also claimed by France and Spain. Neither the European powers nor the new United States recognized the claims of the indigenous people of the continent. The Congress had instructed the commissioners to negotiate a treaty among all the powers and to follow the lead of the French. Had the commissioners not deftly negotiated these complex issues, the United States most likely would have remained a country of thirteen states located between the Appalachians and the Atlantic.

A few months after the Treaty of Paris was ratified on September 3, 1783, a committee of the Confederation Congress led by Thomas Jefferson was formed to create an ordinance for the territory north of the Ohio River to lay out boundaries for a number of states. The committee draft of the Ordinance of 1784 outlawed slavery in the Territory and provided that 'free males of full age' could form a temporary government when enough people populated the territory. The slavery ban was omitted from the Ordinance of 1784 when it was passed by Congress on April 23, 1784.

In 1785, Congress debated some of the deficiencies in the 1784 Ordinance, many of which were technical issues such as survey methods which would provide more accurate methods of buying and selling land, and paying Revolutionary War veterans with land rather than money. The United States was suffering a terrible debt crisis due to the expense of the Revolutionary War. Selling land in the territory north of the Ohio River was one way to get rid of that debt. The President of the United States in Congress Assembled Richard Lee, wrote to his friend Samual Adams 'I hope we shall shortly finish our plan for disposing of the Western lands to discharge the oppressive public debt created by the war.' The Western Land Ordinance passed on May 20, 1875. Its passage required states to relinquish all land claims and these lands became federal government land. Land north of the Ohio River was not empty. Many of the Native American tribes refused to acknowledge U.S. claims to the land. The federal government did not have the resources to remove the Native Americans or to manage the massive influx of settlers into the territory. For these reasons, two plans were set in motion. First, the sale of federal government land to private enterprises like the Ohio Company, and second to put together an ordinance for how this territory and its inhabitants would be governed.

What Was the Significance of the Northwest Ordinance?

The Northwest Ordinance laid the foundation for the creation of five new states.

Article V of the Ordinance stated 'whenever any of said States have sixty thousand or more free inhabitants therein, such State shall be admitted, by its delegates, into the Congress of the United States, on an equal footing with the original States, in all respects whatever; and shall be at liberty to form a permanent constitution and State government.' The Ordinance stipulated that the State government must be a republican form of government.

The Six Articles of the Northwest Ordinance formed much of the bedrock of American constitutional theory and practice.

Article IV made the Territory and any states that may grow out of it part of the United States,

Article V provided that not less than three and not more than five states could be created out of the Northwest Territory.

Article VI outlawed slavery in language repeated in the Thirteenth Amendment "except for punishment of crimes," but requiring that escaped slaves be returned to the slave owner. Finally, the Northwest Ordinance nullified the Ordinance of 1784.

Prompts About the Northwest Ordinance:

Draw a map that illustrates United States' territory after the Revolutionary War ended in 1783. You can draw the map by hand or use computer software to generate one.

Example: The Mississippi River served as the United States' Western border in 1783.

Draw a map that illustrates the land that comprised the Northwest Territory. Draw the map by hand or use computer software to make one.

Example: Your map should include the Ohio River and the Allegheny Mountains.

In approximately three to four paragraphs, write an essay that explains the kinds of issues regarding excess lands that the U.S. was facing following the end of the Revolutionary War.

Example: States, land speculators, and Congress all had different ideas about the purposes of acquiring Western excess lands.

Write an essay of at least three to four paragraphs that describes how the Northwest Ordinance addressed the issue of slavery.

Example: The Northwest Ordinance did not permit slavery in the Northwest Territory, but it did specify that fugitive slaves from other states had to be returned to their owners.

Create a chart or poster that shows the similarities between Thomas Jefferson's 1784 Northwest Territory proposal and the official 1787 Northwest Ordinance.

Example: All newly admitted states would enjoy the same rights as the existing states.

Why did the Northwest Ordinance prohibit slavery?

The Northwest Ordinance was passed by Congress during the same time that the Constitutional Convention was proceeding in Philadelphia which would lead to the new US Constitution. The ban against slavery in the Northwest Ordinance was part of a grand bargain that also led to compromises in the Constitutional Convention with respect to how slaves in the South would be enumerated for the purposed of deterring how many Representatives each state would have.

What was the main aim of the Northwest Ordinance?

The main aim of the Northwest Ordinance was stated in its title An Ordiance for the government the territory of the United States northwest of the River Ohio. The Ordinance also provided some of the definitions of what that government should be: freedom of religion, of travel, a ban on slavery, and a mechanism for the creation of new states.

What was the impact of the Northwest Ordinance?

The major impact of the Northwest Ordinance was to increase the western expansion of white settlement into Native American tribal lands, leading to the addition of five more states into the United States.

What was the main aim of the Northwest Ordinance of 1787?

The main aim of the Northwest Ordinance was stated in its title An Ordiance for the government the territory of the United States northwest of the River Ohio. The Ordinance also provided some of the definitions of what that government should be: freedom of religion, of travel, a ban on slavery, and a mechanism for the creation of new states.

What role did the Northwest Ordinance play in westward expansion?

The Northwest Ordinance provided a government to manage the unfettered influx of settlers into the Northwest Territory, much which was Native American land. It laid the ground work for the establishment of not less than three and no more than five new states.

The Articles of Confederation and the Northwest Ordinance

Facts About the Southern Colonies: Lesson for Kids