Copyright
Marla Alupoaicei, Ann Casano
What is a novella? Learn the novella description and see novella examples. Also compare short story vs novella and see how a novella compares to other writings.

What is a Novella? 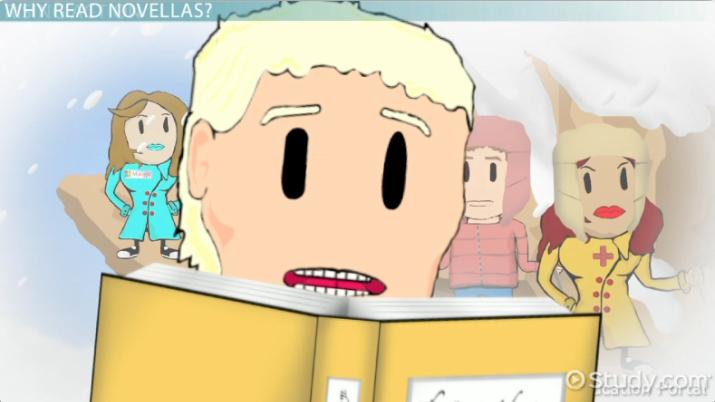 Coming up next: Tropes: Definition & Explanation

Characteristics of a Novella

Novellas are works of fiction, meaning that they utilize imaginary characters and events to tell a story, rather than real people and events. In contrast, nonfiction books tell the story of real people and historical, true events.

How many pages is a novella? Typically, a novella is around 100 pages long in print form, but it may be anywhere from 60-120 pages in length. The word count can vary from 17,500 to 40,000 words. A fictional work of over 40,000 words is considered a full-length novel. Novellas are longer than short stories, but shorter than full-length novels.

In novellas, as well as other types of literature, the protagonist typically is involved in some sort of conflict with one or more person, animal, or force (like nature) that stands between the main character and his or her goal. This person or force is called the antagonist, which is literally translated from Greek as "actor who contends with." This means that the antagonist works against the protagonist. In some cases, the antagonist is the enemy of the protagonist, or the villain of the story.

In the case of a novella like "The Old Man and the Sea" by Ernest Hemingway, the primary character (protagonist) is Santiago, an aging Cuban fisherman. The beautifully crafted novella centers on one man's epic battle for survival as he struggles to bring in the catch of his life (a huge marlin fish). It takes Santiago three full days to wear the fish down enough to kill it. The fish is so large that Santiago has to lash it to his boat in order to bring it back toward shore. On the way, sharks eat most of the marlin's flesh. Yet Santiago is determined to get the fish to shore. Santiago faces several antagonists in this novella: the fish, the sharks, the sea, and nature itself, as he fights for his life.

In a novella, sharp focus is put on the main character or characters. In most cases, the primary character faces a particular conflict that is developed and reaches some type of resolution by the end of the novella. In our previous example of "The Old Man and the Sea," the old man (Santiago) is the main character, or protagonist. His character is developed as he battles his antagonists: the marlin fish, the sharks, the sea, and nature herself.

In literature, the antagonist is the force or individual that stands between the protagonist and his or her goal. In this story, the marlin is one of the antagonists, as it acts in direct opposition to Santiago. The fisherman wants to capture the fish, while the fish is driven by its desire to survive. Their struggle against each other is the primary conflict of the novel.

Here is a list of twenty-five of the best-known and/or most popular novellas in the English language. Some were first written in another language and then translated into English.

A short story is a fictional work of literary prose, written in a narrative style. Generally, the narrative style is written either in first person (from an "I" perspective) or in third person (from a "he/she/it" perspective). A short story is one of the most common forms of writing. It usually has a sharp focus and describes a single event, a single episode, or a tale of one particular character. A short story typically does not involve major plot twists and conflicts. It also rarely involves various sub-plots or a wide variety of characters.

A novelette is a fictional work of prose that is shorter and less complex than a novella. A novelette features imaginary characters and events. Novelettes have a lower number of words than a novel or novella, but a higher word count than other forms of prose fiction like short stories and microfiction (also called flash fiction). A novelette typically has a word count between 7,500 and 17,500 words. Even though novelettes are short in length, they typically are focused and tell a complete story.

Novels differ from novellas in several important ways. Here are some of them:

Popularity and Adaptations of Novellas

Novellas remain a favorite with today's readers for a variety of reasons. Novellas are relatively short and often can be read in one or two sittings. They tend to provide a laser-like focus on one or two primary characters and have intriguing, concise plots. As compared with full-length novels, novellas are easy to read, describe and discuss with others.

In today's culture, people are busy, and their time is divided between reading (in print or using a device) and the use of other media. The short length of a novella can make it an easier read for students and young people. The concise, focused plot also lends itself well to adaptation for film and television.

A novella is a narrative work of prose fiction that typically is shorter than a novel. The English term "novella" is drawn from the Italian word "novella," the feminine form of the word "novello," which means "new." A novella is shorter and has a less complex plot than a full-length novel, but it is longer than a short story. To review, here are some of the defining characteristics of a novella:

What is the purpose of a novella?

The purpose of a novella is to tell a story in a form that is longer than a short story, but shorter than a full-length novel. A novella is a work of fiction, meaning that it utilizes imaginary characters to tell the story and develop the plot.

What is the difference between a novella and a novel?

A novella is shorter than a typical novel. Generally, a novella is around 100 pages long (between 17,500 and 40.000 words). In addition, its plot is more compressed and concise than that of a full-length novel, focusing on a primary character (protagonist) and the character(s) or force(s) that opposes the protagonist. This character or force is known as the antagonist.

How many pages is a novella?

What makes a book a novella?

A novella is a work of fiction that is shorter than a full-length novel, but longer than a short story.

What is a Novella? | Novella Examples & Characteristics
Related Study Materials

What is a Novel? | Characteristics of a Novel

What Is Fiction? - Definition & Types