Nuclear energy has impacted lives globally during the 20th and 21st centuries. It ended the second world war, raised tensions during the cold war, and now powers more than four hundred reactors in thirty-two countries across the world, bringing electricity to millions.

Nuclear energy is a form of energy released from the nucleus of atoms. This energy can be released either through fission (when a large nucleus is split apart) or fusion (when small nuclei are fused together).

Energy is the power necessary to do work or create force. Energy can be produced through both chemical and nuclear processes. Chemical energy is stored in the bonds of chemical compounds and is released during chemical reactions. Individual atoms remain intact and the same, but join with other atoms in a chemical reaction. By contrast, nuclear energy is created when the nuclei of many individual atoms split or fuse. This fundamentally changes the atom, transmuting it into a different kind of element.

People use chemical energy when using alkaline batteries or burning gasoline. In these cases, molecules are broken apart, atoms are rearranged, and energy is released. But with nuclear energy, the very nature of individual atoms is changed. For example, uranium is broken into smaller, radioactive pieces, and massive amounts of energy capable of leveling entire cities are released.

In 1905, Albert Einstein published four papers that revolutionized the modern understanding of physical science. One of these papers dealt with mass-energy equivalence, the idea that mass and energy are the same and a concept famously represented by Einstein's equation: {eq}e=mc^2 {/eq}.

In the equation, e stands for energy, m stands for mass, and c stands for the speed of light. This equation enables the calculation of the amount of energy per unit of mass. It also shows how mass can be manipulated to produce large amounts of (nuclear) energy.

If a mass of atoms (such as uranium) undergoes a nuclear reaction with the product having a slightly reduced mass, the reaction is said to have produced a mass defect, which is released as energy. This explains how a relatively small mass of uranium can power a nuclear reactor. In fact, one fuel pellet of uranium (about the size of a pencil eraser) creates as much energy as 2,000 pounds of coal or 149 gallons of oil. 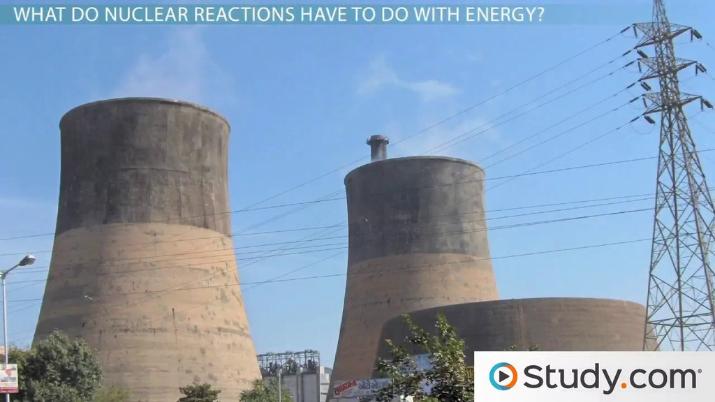 Try it now
Back
Coming up next: How to Calculate Specific Heat Capacity for Different Substances

The atom with the least mass is hydrogen. This element contains one proton in its nucleus along with zero to two neutrons. If two hydrogen atoms are heated up and combined, their nuclei can fuse together producing a larger atom that contains two protons and two neutrons.

Adding two hydrogen atoms together creates one helium atom. Because a helium nucleus has slightly less mass than the two hydrogen nuclei, that mass defect results in a massive energy release. Nuclear fusion is quite common in the natural world, and humans frequently benefit from the energy created by nuclear fusion. For example, the Sun is powered by fusion, and everything from solar power to wind power to the flow of rivers is simply stored fusion energy from the Sun.

Fission is the opposite of fusion. It is the process of splitting atoms. Typically, this will involve uranium, the atom with the most mass found in nature. Uranium is a mined, heavy, gray metal. Its nucleus contains ninety-two protons along with 141 to 146 neutrons.

When uranium is bombarded by extra protons or neutrons, its nucleus grows, becomes unstable, and splits into smaller pieces. Because these pieces have slightly less mass than the original nucleus, a mass defect occurs. The difference of mass is released as massive amounts of energy. This is the process that occurs in nuclear weapons and nuclear power plants: uranium atoms are manipulated to split and create energy.

In nuclear reactors, this release of energy is tightly monitored and controlled. The reaction happens a few atoms at a time, and the excess energy is extracted and stored. In nuclear weapons, the reaction is deliberately out of control. In an atomic bomb, a chain reaction occurs as the uranium splits, releasing energy and extra particles. These particles bump into new uranium atoms, splitting more atoms and so on.

One of the problems with fission (aside from the difficulty of controlling it) is that leftover pieces behave strangely. Atom byproducts are atypical: often occurring in strange sizes and shapes that are unstable. Because of their instability, they have a tendency to release radiation and break down further--often described as "radioactive." This leftover waste can be radioactive for 1,000 to 10,000 years.

On December 20, 1951, the world's first nuclear power plant was switched on. It was called EBR-I and it powered four 200-watt light bulbs.

Today, there are 445 operating nuclear power plants according to the World Nuclear Association. A nuclear power plant is a facility that harnesses the energy released during a nuclear reaction to generate electricity. Although these plants may have different designs, they all operate using the same basic principle: a controlled uranium fission reaction.

Inside a power plant's reactor, fuel rods of uranium are slowly lowered into the reactor core. There, they are exposed to conditions that will continue the ongoing nuclear reaction. When the new fuel is added, additional protons and neutrons released by the reaction inevitably collide with the fresh uranium atoms. When these particles are absorbed, the fresh uranium atoms become unstable and break apart, releasing their own energy as well as additional particles.

The nuclear reactor core contains large amounts of water. The energy released from the nuclear fission of the uranium causes the water in the reactor core to heat up. This water releases steam, which is used to turn a turbine, spin a generator, and produce electricity, which can then be sent to consumers.

There are many different reactor designs, ways of extracting the heat, and ways to turn that heat into electricity. But the basic steps are similar, enabling nuclear power plants to produce about 2,500 TWh of energy, generating roughly 10% of the world's electricity.

Nuclear energy is a form of energy released from the nucleus of atoms. In nuclear power plants, energy is released through a fission reaction when large atoms are split apart. In stars like the Sun, the energy is released through fusion reactions, when small atoms are fused together. Einstein's work related to mass-energy equivalence helps explain how nuclear energy is possible. The relationship between energy and mass is represented in his famous equation, {eq}e=mc^2 {/eq}, which shows that it takes only a tiny amount of mass to generate an immense amount of energy.

In a typical fusion reaction, two hydrogen atoms are heated up and fused together, creating a larger helium atom. Because a helium nucleus has slightly less mass than the sum of two hydrogen nuclei, the resulting mass defect releases a massive amount of energy. In a typical fission reaction, like those that occur in nuclear power plants, large uranium atoms are bombarded with excess energy and particles. When these extra particles are absorbed, the uranium nucleus becomes unstable and breaks apart. Just as in nuclear fusion, the resulting mass defect spurs a large energy release. In power plants, this energy is used to create steam, turn a turbine, and manufacture electricity.

In this activity, you will check your knowledge regarding the definition and examples of nuclear energy, as presented in the lesson.

Determine whether the following statements are true or false. To do this, print or copy this page on a blank paper and underline or encircle the answer.

1. An atom is a substance that has inertia and occupies physical space and consists of various types of particles.

2. Nuclear fission generates radioactive waste that is harmful to life and has a huge impact on the environment.

4. A physical reaction is a reaction that changes the nucleus of an atom.

5. Work is the measure of energy transfer that occurs when an object is moved over a distance by an external force or effort.

7. Nuclear energy is the energy in the core of an atom that can be used to create electricity via nuclear reactions.

8. Particles, such as protons, are employed to split uranium nuclei into fragments.

9. Nuclear fusion has no radioactive waste and uses helium particles as an energy source.

10. A nucleus is the massive, positively charged central part of an atom, made up of electrons and neutrons.

What is a simple definition of nuclear energy?

The International Atomic Energy Agency defines nuclear energy as "a form of energy released from the nucleus, the core of atoms, made up of protons and neutrons."

What are common uses of nuclear energy?

The most common use of nuclear energy is a controlled fission reaction of uranium in nuclear power plants. The mass deficit of this reaction produces energy that is converted into electricity.

What are the 2 types of nuclear energy?

The two types of nuclear energy are fission (when a large nucleus is split apart) and fusion (when nuclei are fused together).

Forms of Energy: Lesson for Kids

Forms of Energy: Lesson for Kids