Copyright
Peter M. Williams, Artem Cheprasov
Understand nuclear fusion in stars. Learn about the sun's nuclear fusion. See an explanation of the process of nuclear fusion and the role played by hydrogen. Updated: 06/29/2022

The sky at night is usually embellished with twinkling stars of all kinds. However, these celestial bodies carry profound mysteries which are beyond imagination. Firstly, the stars are normally categorized based on their sizes and masses; categories of starts include giants, super-giants, white dwarfs, and main-sequence stars. In addition, the stars are similar to the sun since they never reflect light, but they produce their own light. Therefore, the sun is also considered a star. Stars can thus be defined as massive, hot, glowing balls (spheres) comprised of burning gases. These gases are hydrogen and helium, the main constituents of stars.

For instance, hydrogen has one proton and zero neutrons in its nucleus. On the other hand, helium has two protons and two neutrons in its nucleus. Therefore, a hydrogen nucleus can be combined with a helium nucleus through nuclear fusion because the nucleus of helium is heavier than that of hydrogen. Nuclear fusion can thus be defined as a reaction that combines a lighter nucleus with a heavier nucleus, ultimately releasing energy. The energy release is due to the tighter nuclei bond created when these two nuclei combine. A fraction of this generated energy is then radiated out, thus the light emission. Generally, this is what star nuclear fusion is all about.

The sun is considered a star whose nuclear fusion occurs in its central region known as the core. Generally, the sun's nuclear fusion involves a combination (fusion) of four hydrogen nuclei, which results in one helium nucleus. During this process, energy is also emitted from the conversion of some hydrogen masses (matter quantity) into energy. The fusion of these hydrogen nuclei occurs in a series of reactions known as the proton-proton chain. This reaction aims to build a helium nucleus through the addition of protons.

This begins with the combination of two hydrogen nuclei, forming a heavy hydrogen nucleus called deuterium. This combination leads to the emission of two particles, namely, positrons and neutrinos. A positron is a positively charged electron, while a neutrino is a subatomic particle characterized by low mass and a speed equivalent to that of light.

The heavy hydrogen nucleus formed then absorbs another proton. This results in energy emission in the form of gamma rays and the formation of a light helium nucleus. Two light helium nuclei then combine to form a helium nucleus, releasing energy. The energy in this fusion reaction is in the form of the positrons, neutrinos, gamma rays, and motion energy of other particles. Neutrinos escape from the sun at the speed of light, carrying with them two percent of the energy, which also reaches the earth.

The gamma rays get trapped by the surrounding gases as they try to escape. This entrapment makes the gamma rays heat the surrounding gas. Other gamma rays that keep the gas hot are formed when positrons combine with other electrons, which make them disappear, and their masses get converted to gamma rays. The temperature of the surrounding gases is also kept high by the motion energy of particles that collides at high velocity with the newly formed nuclei. The hot and dense temperatures make it possible for nuclear reactions to occur at the sun's center. Therefore, nuclear energy flows from the sun's core to its outer regions. This energy from the core hits the earth as the sunlight.

The energy from the sun is vital to all living things. For instance, plants require this energy to manufacture food through photosynthesis. This energy is also essential in synthesizing vitamin D in humans and animals. In addition, this energy acts as a source of fuel, especially in solar lighting. Moreover, many human activities, such as sun drying of foodstuff and clothes, depend on the energy from the sun. 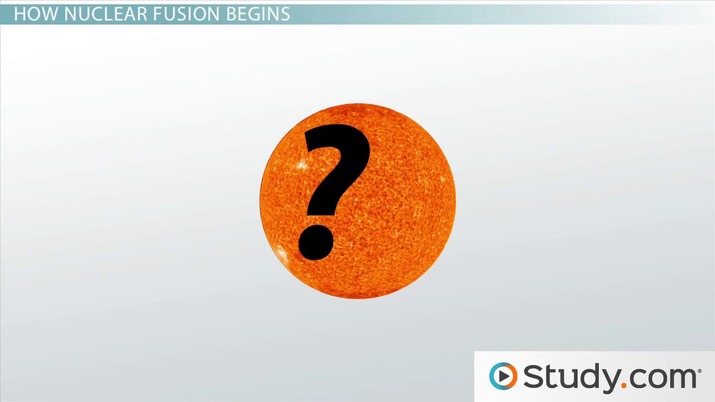 Coming up next: Forces Keeping Stars in a Stable Equilibrium

Since nuclear fusion involves the combination of nuclei, these reactions can only occur under high temperatures. For instance, the central part of the stars is characterized by high temperatures of up to 10,000,000K (Kelvins). During the reaction, charged particles (primarily protons, which are positively charged) usually are released.

These particles generally repel each other, and high temperatures (such as 10,000,000K) are required to come together and react. For instance, the hydrogen nuclei (the central portion of a hydrogen atom containing one proton) usually get converted to helium nuclei with a release of energy under these high temperatures. Therefore, high temperatures facilitate the collision of repelling particles at a very high speed. Once a nuclear reaction is ignited in the central region, a star is born. Generally, a star's formation begins with a protostar, a dense central region arising from swirling gaseous clouds.

As the nuclear energy is released from the core (interior) of the stars, some of it gets lost outwardly through radiation and convection. Therefore, a balance between the energy released from nuclear fusion and the energy lost to the surface should be equivalent. In case nuclear fusion is inadequate, a gravitational contraction occurs. This phenomenon contracts the size of the stars through gravity by converting the gravitational potential energy into thermal energy. Ultimately, this increases the internal temperature of a star.

Ideally, the star's core is surrounded by hot gases that create high temperatures, a conducive environment for nuclear fusion. In addition, the force of gravity tends to pull the stars' materials towards its core (center). However, this pull gets resisted by the outward pressure of the hot gases. Therefore, a balance between these two forces (gravitational and pressure force) is required for a star to maintain its shape and avoid contracting. This balance is called hydrostatic equilibrium, or, a balance between the gravitational and pressure force in a star.

Stars are a celestial body comprised of extremely hot gases. These gases are mainly hydrogen and helium. Stars release energy through nuclear fusion, a reaction that involves combining a lighter nucleus and a heavier nucleus. For instance, the hydrogen nucleus is lighter since it comprises one proton and zero neutrons. On the other hand, the helium nucleus is heavier since it has two protons and two neutrons. Energy is released when hydrogen nuclei are converted to helium nuclei. These reactions require high temperatures of up to 10,000,000K to occur. High temperature reduce the repulsion of the like-charged particles (positively charged protons), making them collide at high velocity.

Nuclear fusion in the sun fuses four hydrogen nuclei to form one helium nuclei through a proton-proton chain reaction. This reaction releases energy (gamma rays) and particles such as neutrino and positron. The heavy hydrogen molecule formed in this reaction is called deuterium. Hot gases surround the core of the stars. The hydrostatic equilibrium maintains a balance between the gravitational and pressure force of a star. On the other hand, the gravitational contraction increases the inside temperature of a star by converting gravitational potential energy into thermal energy.

Where does nuclear fusion occur in a star?

Nuclear fusion normally occurs at the central part of a star, mostly called the core. High temperatures of up to 10,000,000K characterize this region.

What is fusion in the stars?

Fusion in stars is a nuclear reaction that combines a lighter nucleus with a heavier nucleus, thus releasing energy. For instance, these reactions generally convert hydrogen nuclei into helium nuclei, accompanied by energy emission.

What stars have nuclear fusion?

Nuclear fusion is exhibited in all kinds of stars. This includes the sun, dwarf stars, giant stars, super-giant stars, and main-sequence stars.

Create an account
Nuclear Fusion in Stars | How Did the Sun Form?
Start today. Try it now
Basics of Astronomy

Nuclear Fusion in Stars | How Did the Sun Form?
Related Study Materials