Lia Kim, Amanda Robb
Do animal cells have a nucleus? Yes! Learn the structure of the nucleus and understand its functions within the cell. Updated: 12/01/2021

A nucleus is an organelle within a cell that encloses DNA. DNA stands for deoxyribonucleic acid, a molecule that contains genetic information. The nucleus not only stores DNA but directs the synthesis of ribosomes, acting like the boss of a cell.

Do animal cells have a nucleus? Yes! All animals are eukaryotes, meaning they are made up of many cells with a true nucleus. The animal nucleus is membrane-bound, which is one of the many structural components that differentiates them from prokaryotic organisms like bacteria.

Both animals and plants are eukaryotes, meaning they both have a nucleus, plasma membrane, ribosomes, mitochondria, peroxisomes, and cytoplasm. However, animal cells and plant cells have important structural differences.

The lysosome is an organelle that contains digestive enzymes. Plant cells do not have lysosomes, but instead, have vacuoles. Both lysosomes and vacuoles break down waste products, excess or worn-out cell parts, or destroy viruses and bacteria.

Animal cells have both lysosomes and vacuoles, while plant cells only have vacuoles. Plant cells also have a large central vacuole, which stores water to maintain pressure in the cell.

The cell wall in plant cells helps maintain the shape of the cell and protects it. The main component within the plant cell wall is cellulose, a polysaccharide. The crunchiness in raw vegetables is due to cell walls breaking! Plant cells also contain plasmodesmata, which are membrane-lined channels that connect different plant cells together and enable cell-to-cell communication. Animal cells have gap junctions, which have a similar function to plasmodesmata but are structurally different.

Another unique organelle within a plant cell is a chloroplast. Chloroplasts allow plant cells to conduct photosynthesis, an important series of reactions that convert carbon dioxide, water, and energy from light into sugar and oxygen. The greenness of plants is due to the pigment called chlorophyll that is found in chloroplasts. Plant cells also have plastids, which stores pigments, unlike animal cells. 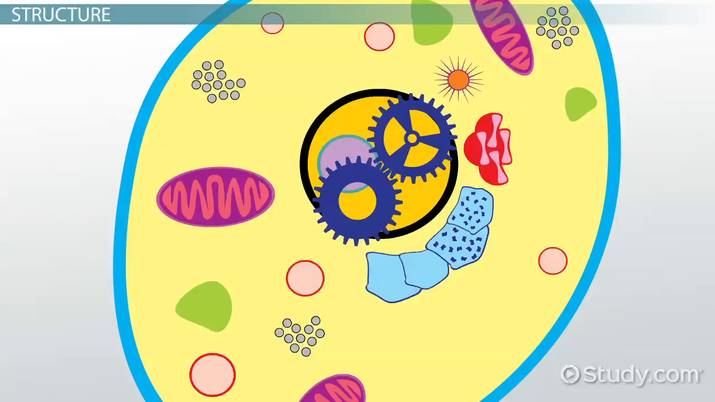 Coming up next: Parts of the Cytoskeleton

In a eukaryotic cell, the nucleus is one of the largest organelles. It is not just a rigid, solid ball-like structure; it has pores, a nuclear membrane, nucleoli, and is filled with nucleoplasm.

Nucleus Function in an Animal Cell

DNA is stored in the nucleus in tightly wrapped coils known as chromatin. The DNA is coiled up because a single cell's DNA would be nearly two meters long if it was straightened out! The chromatin consists of DNA and scaffolding proteins called histones around which DNA is wrapped. Chromatin is found in the nucleoplasm and makes up a higher-order structure called chromosomes when the cell is getting ready to divide.

Ribosomes are important cellular organelles that synthesize protein. Every cell needs protein for the structure and function of nearly every cellular process!

The nucleus provides instructions to the ribosome on which protein to make by transcribing DNA into messenger RNA (mRNA). The ribosomes receive the mRNA and translate the code into specific amino acids. Proteins are made up of chains of amino acids configured into a 3-dimensional structure based on the protein's specific function.

In order for a eukaryotic organism to grow and develop, cells must replicate themselves in great numbers, each with the full copy of the DNA found in the original cell. The nucleus plays an important role during cell division by replicating DNA. The steps of DNA replication are summarized below into three generalized steps:

The nucleus is an important organelle within a eukaryotic cell that stores DNA and directs the synthesis of ribosomes. All animals have a nucleus in their cells because all animals are eukaryotes. Within a eukaryotic cell, the nucleus is one of the largest organelles. It has pores, a nuclear membrane, nucleoli, and is filled with nucleoplasm. The nucleus does many important things that allow for animals to live. The function of the nucleus in an animal cell includes organizing, protecting, storing, and copying DNA, as well as making ribosomes. Ribosomes are sites of protein synthesis.

Animal cells and plant cells are both eukaryotes, meaning they have a membrane-bound nucleus, but they have important structural differences:

What are the main functions of nucleus?

The function of the nucleus in an animal cell include organizing, protecting, storing, and copying DNA. The nucleus also contains nucleoli, a site that makes ribosomes, an important organelle for protein synthesis.

Do all animal cells have a nucleus?

All animals are eukaryotes. They belong to the Domain Eukarya. All eukaryotes have a membrane-bound nucleus. Thus, animal cells have a nucleus!

Do Animal Cells Have a Cell Wall?

Cell Wall Function, Structure & Diagram | What Does the Cell Wall Do?

Nucleus of a Cell | Where is the Nucleus Located?