Margaret Hagen, Artem Cheprasov
Discover the philosophical principle of Occam's razor. Study examples from history, the potential pitfalls of Occam's razor and how to use this principle. Updated: 09/24/2021

What Is Occam's Razor?

A woman is sitting on her couch on a rainy evening watching a scary movie. She notices through the corner of her eye a flash of light outside her window. Two theories come to mind for what might have caused this:

While the movie she is watching may lead her to suspect alien intervention, it is far more likely that the light was due to a storm. The logical tool used to determine the cause of this light will be discussed in this lesson.

Occam's Razor (also sometimes spelled Ockham's Razor) is a principle stated initially in Latin: Pluralitas non est ponenda sine necessitate this translates to 'Plurality should not be posited without necessity.'

This principle is sometimes used interchangeably with the law of parsimony, which states that 'The best explanation is the one that requires you to make the fewest possible assumptions.' These both generally state that the simplest explanation is usually the best.

Who Came Up with the Occam's Razor Theory?

The Occam's Razor principle is credited to a Franciscan philosopher named William of Ockham in the mid 14th century.

While it is clear that the "Occam's" portion refers to the principle's architect (misspellings led to the modern spelling "Occam" instead of William's spelling "Ockham"), there is more confusion surrounding the other half of the name. 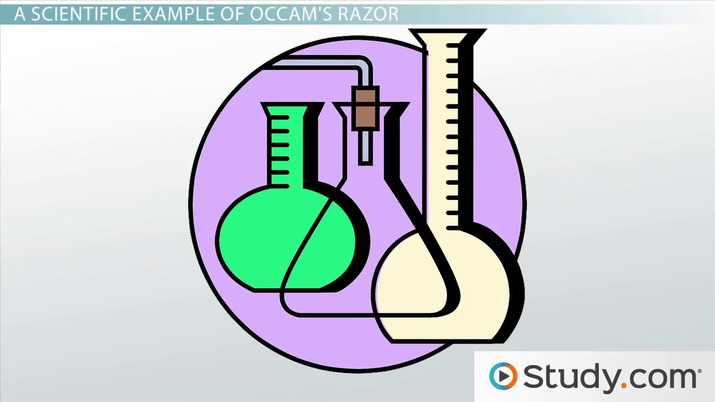 Coming up next: Weather vs. Climate: Definition, Differences & Effects

This principle can be used to quickly find answers in many areas of life, both scientific and ordinary. Below are a few examples of scenarios where people had to choose between two alternate explanations. In each case, Occam's Razor could be used to determine which theory is most plausible.

A man's phone rings, and he does not recognize the phone number. He wonders if:

A person wakes up with a headache after a night of heavy drinking. They decide to search the internet to diagnose the problem. They determine that it is one of two things:

When early scientists were trying to determine how the planets of the solar system move, they had trouble explaining the observations of retrograde motion, where some planets appeared to move backward, there were two main theories:

A young lady performs an experiment with crickets in her science class, and her results drastically oppose her original hypothesis. In her lab report, she explains why she thinks this may have happened, either:

In each of these cases, one simple answer can easily explain the observed phenomenon and one complex and convoluted alternative explanation for the same observation. Occam's Razor indicates that it is more likely that:

Occam's Razor can be used to predict the best option when multiple explanations are available quickly.

It is important to remember that this is a guiding principle rather than an absolute truth; there are some cases where simplicity can fail to capture the complexity of a situation. If the simplest explanation is accepted without adequately testing other theories, it can lead to misinformation and slow the progress in that area. This is especially true in biological concepts, which sometimes evolve in non-intuitive ways.

It is essential not to use this principle as a substitute for the scientific method and logic. Comprehensive data collection and empirical analysis must be used for drawing and supporting conclusions. Occam's Razor is merely a tool for cutting through the clutter and using the best scientific knowledge at the time to find which explanations are more probable and therefore worth investigating.

Explanations that are simple in theory but do not work in practice are not better than complex theories that work. As Einstein once said, "Everything should be made as simple as possible, but no simpler."

Occam's Razor is a principle which states that plurality should not be posited without necessity. In other words, the simplest explanation for an observation is usually the best explanation for that observation. It is also sometimes called the law of parsimony, which is used a little more loosely. Occam's Razor requires that the two theories would result in the same observation. In contrast, the law of parsimony can be used to compare any two predictions, even if their results would not be the same.

This principle can help determine which theories are more plausible but is not a substitute for empirical experimentation and comes with a risk of confirmation bias in interpreting scientific results.

Occam's razor is valid in some cases, but in others the correct explanation is a more complex option. This is why Occam's razor should be used as a guiding principle rather than an absolute rule.

In simple terms, Occam's razor states that when choosing between two explanations for an observation, the simpler explanation is more likely to be correct.

How is Occam's razor used?

Occam's razor is used to determine which explanation for a phenomenon is more likely to be true. It states that the observation that is simpler is usually better.

What is meant by Occam's razor and when would you use it?

Occam's razor is a tool used for determining what solution or explanation is most likely to be correct. It can be used any time that there is more than one possible explanation for something, but it should be combined with empirical testing or observations before a conclusion is made.

What is an example of Occam's razor?

If someone has a headache, it is more likely that they are simply dehydrated than it is that they have a brain disease.

Empiricism Definition & Examples | What is Empiricism in Philosophy?