Plate tectonics is the theory that the surface of the Earth is covered by rigid plates. These plates consist of the lithosphere, which contains the crust and the uppermost rigid layer of the mantle. The plates move relative to each other on the surface, driven by convection, or cycling in the mantle.

The plates interact with each other in three ways:

In addition, there are two types of plates: oceanic and continental. Oceanic plates are plates that lie primarily under the ocean. Continental plates are those containing continents.

As the plates interact with each other like when two continents collide together, they shape the topography, or relief, of the Earth's surface. They also can cause geologic events to take place, such as earthquakes and tsunamis. Earthquakes are defined as both slip along a fault or crack in the Earth, and the shaking motion felt by the release of energy caused by such a slip. Tsunamis are large sea waves that result from large earthquakes occurring near the top of the plate under the ocean.

There are three different types of plate boundaries: divergent, convergent, and transform. These boundaries can occur beneath oceans or continents, though their behaviors can differ.

Spreading centers under oceans are called ridges. Examples include the Mid-Atlantic Ridge and the East Pacific Rise. They are topographic highs because the heat from the mantle causes the new crust to be more buoyant. As the crust ages and is pushed away from the ridge, it becomes colder and denser, forming the ocean basin.

Spreading can occur within continents as well. The current divergent boundary between the African and Arabian plates began with the two continents connected. When heat accumulates beneath a continent and causes spreading, the process is called rifting. The warm material will push into the continent and create a series of faults. The continent thins and a depression is formed. Eventually, the continent splits into two, and a new ocean forms.

At these boundaries, the plates collide with each other. For collisions that involve oceanic plates, subduction will occur. Subduction is the process of one plate sliding underneath another. The cold, dense, oceanic crust will sink under the more buoyant plate and be recycled into the mantle. Subduction zones create the largest earthquakes and are some of the most volcanically active areas in the world. They are also the regions where tsunamis are typically generated. The Aleutian Arc in Alaska was created by the subduction of one oceanic plate under another oceanic plate.

Continental crust is not dense enough to subduct. When two continents collide together, both plates have the same density and will create a large mountain range instead of a subduction zone. The Himalayas are an example of this type of mountain range, formed by the collision of the Indian and Eurasian plates.

At these boundaries, the plates slide alongside each other. There is no significant difference in behavior based on the type of plates involved in these boundaries. A well-known example of this boundary type is that between the Pacific and North American plates in California, where they create the San Andreas Fault. 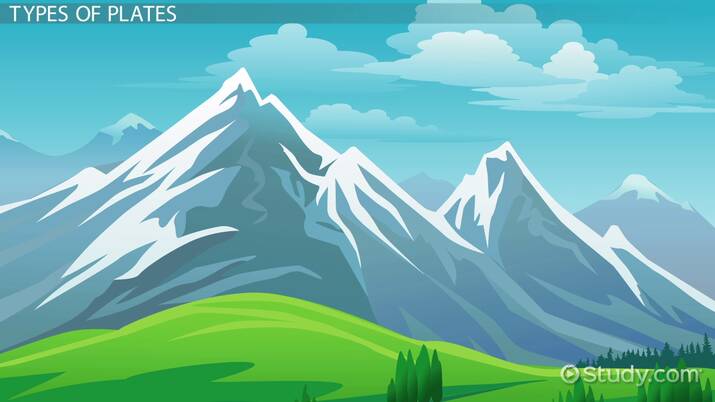 Try it now
Back
Coming up next: Plate Boundaries: Convergent, Divergent, and Transform Boundaries

What Is Oceanic Plate Density?

Oceanic plates are plates that are located beneath the ocean. As stated, oceanic plates are denser than continental ones. This is because they are made of denser rocks. Oceanic plates are typically composed of basalt. Basalts are mafic igneous rocks, which means they have a silica (quartz) content of less than 20% and are created by the cooling of lava. Basalts have a density of 3.0 g/cm3, or 200 lbs/ft3.

New oceanic plates are formed at spreading centers such as mid-ocean ridges. As the plates are pushed apart, new material is added from the hot mantle below. A typical sequence of the new oceanic crust has the following layers:

As oceanic crust is the newest crust on the surface of the Earth, it has an age range of 0 to 200 million years, quite young for an Earth that is 4.6 billion years old.

What Is Continental Plate Density?

New continental crust can be developed at collisional boundaries. Sediments will be scraped off of subducting oceanic plates, creating new sedimentary rocks. Volcanic arcs are also formed at these boundaries, creating islands in ocean basins and adding more material onto continents. The following layers are observed in the continental crust:

While continental crust is the thicker of the two, oceanic crust is denser. That is because it has a more mafic and lower silica content:

How Does Density Affect the Buoyancy of Plates?

Buoyancy is defined as the ability of an object to float in a fluid. Density is defined as the mass of an object per its unit volume. The relationship between the two is called Archimedes' principle: an upward force on an object from the fluid is equal to the specific weight of the object times the volume of the displaced fluid. Specific weight is equal to the object's density times gravitational acceleration. When the force is smaller, the buoyancy of the object is larger.

What is the oceanic plate made of?

Oceanic plates are made primarily of mafic igneous rocks, such as basalt. They have a silica content of less than 20%. The material that creates oceanic plates comes directly from the underlying mantle at ocean ridges.

What are the densities of continental and oceanic crust?

Subduction Zones & Processes | What is Subduction?