What is an Octopus?

Earth's oceans are inhabited by a wide variety of fascinating creatures. From sharks and dolphins to jellyfish and crabs, different parts of the ocean are characterized by unique populations of animals. The octopus represents one interesting animal found in the ocean.

Although sometimes confused with the squid, octopuses constitute a distinct species with their own anatomy and life history.

What kind of animal is an octopus? Octopuses are invertebrate cephalopods characterized by a large head with eight attached arms. Approximately 300 species of octopus can be found in oceans throughout the world. While a majority of octopuses live on the ocean floor, some species can be found living closer to the ocean's surface. Octopuses use their arms to catch prey, like crab, shrimp, and mollusks.

Because their bodies are invertebrate, or lacking a backbone, octopuses are able to change their body shape to hide from prey and potential predators. This also enables octopuses to fit through small cracks and spaces. Some species of octopus are also able to camouflage themselves using special skin cells capable of producing a variety of colors and textures. An octopus is also able to use a special muscular tube, known as a siphon, to forcefully expel water in order to escape from predators.

Some more interesting information about octopuses will be covered below in this lesson. 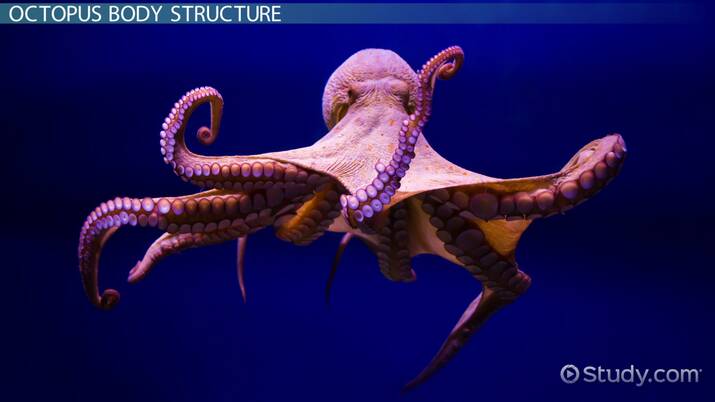 Try it now
Back
Coming up next: Echinoderm Lesson Plan

So is an octopus a mammal or is an octopus an invertebrate? When classifying living organisms, we use taxonomy, or the scientific method of organizing creatures based on their relatedness. Based on taxonomy, the octopus classification is as follows:

Using this taxonomy, the octopus represents an invertebrate cephalopod. Invertebrate refers to the fact that octopuses lack a backbone, while cephalopod comes from the Greek words for "head" (cephalo) and "foot" (poda). So the name octopus literally translates into "head-foot." This name is used in reference to their anatomy, which essentially consists of a large head and eight attached arms.

The scientific name for an octopus includes its genus and species designations. Some examples of octopus species include the Octopus Australis, Octopus Macropus, and Octopus Wolf.

Octopus characteristics are highly variable depending on the specific species. However, there are some traits that are commonly found in octopuses.

Octopuses are incredibly smart animals, with the ability to use tools and recognize individuals. In some species of octopus, for example, the animal will use shells or rocks to build shelters for itself. Other species will use the venom-containing tentacles of the Portuguese man o' war to protect themselves. Some octopus species will use tools for killing their prey and when eating.

The ability to recognize different individuals is related to the octopus eye, which is as complex as the human eye. The eyes of an octopus are large in size and capable of moving independently from one another. The octopus can change its visual field by withdrawing or extending the eyes out from the head, and even by rotating the eyes up to 80 degrees in either direction. These characteristics of the octopus eye enable this animal to have a high level of visual acuity.

Octopuses, such as the Mimic Octopus (Thaumoctopus mimicus), also have the ability to camouflage their bodies from predators and prey. The octopus possesses a special adaptation that allows it to change its skin's color and texture. Embedded within its skin are specialized organs known as chromatophores. Chromatophores contain red, yellow, and brown pigments, as well as radial muscles, that produce bumps and color patterns mimicking the environment in which an octopus is found.

Some other characteristics of octopuses include:

The octopus has unique anatomy that is characteristic of cephalopods. As their name implies, the octopus has a large head with big eyes and a beak-like jaw. Attached to the head are four pairs of arms covered in suckers, or suction cup-type structures, that aid in capturing prey and using tools.

The octopus nervous system is unique in that it consists of three parts: a central brain, optic lobes attached to the retinae, and the peripheral nervous system - mini-brains located in each arm. This allows different parts of the body to process information and carry out movements independently from one another.

The cardiovascular system of the octopus is unique for having three hearts. Each heart has a different function: one heart is responsible for circulating blood in the body, while the other two hearts help to oxygenate the blood. This is accomplished by running blood over the gills, where gas exchange takes place.

Reproduction in octopuses varies depending on the specific species. In Octopus Vulgaris, a species found throughout the world, the male transfers spermatophores to the female using a structure called the hectocotylus. This can occur between males and females over the course of several weeks and amongst different individuals. The eggs are fertilized by the spermatophores in the oviducts, which cover the eggs with a sticky fluid that keeps the eggs together in a bundle.

The female octopus looks for a sheltered location in shallow water in which to lay her eggs. A single female can lay anywhere from 100,000 to 500,000 eggs during a single spawning event. The female will then take care of these eggs for four to five months. After the eggs hatch, the female typically dies, having lost nearly a third of her weight while caring for the eggs.

The octopus represents an invertebrate cephalopod found in oceans throughout the world. As suggested by their class designation, cephalopod, octopuses are characterized by a large head with eight attached arms. Octopuses are incredibly smart animals, with the ability to use tools and to detect differences between individuals. This intelligence is a result of the interplay between their nervous system and large, complex eyes. In addition to having a central brain, octopuses have peripheral brains located in each of the arms. Moreover, the octopus eye is characterized by excellent visual acuity.

Octopuses make use of a number of adaptations to hunt and protect themselves from predators. Their skin consists of chromatophores that help to change the color and texture of the skin depending on their habitat. They also possess venom that is used when hunting prey and when defending themselves from other animals. The octopus has three hearts, one that circulates blood within the body, and two other hearts that oxygenate blood as it passes over the gills. Reproduction takes place when males use their hectocotylus to transfer spermatophores to the female. The female will then spawn up to 500,000 eggs which she will care for until they hatch, at which time she dies.

Is an octopus a fish or a mammal?

An octopus is neither a fish nor a mammal. Instead, octopuses are cephalopods related to squid and cuttlefish. The octopus is classified as one branch of mollusks.

What is an octopus classified as?

An octopus is classified under the phylum Mollusca and class Cephalopoda. They are invertebrate cephalopods with a high degree of intelligence and excellent visual acuity.

Is an octopus a mollusk or a cephalopod?

An octopus is an invertebrate cephalopod. As suggested by the root words of their name- cephalo (head) and poda (foot), octopuses are characterized by a large head with eight attached arms. However, cephalopods like the octopus are part of the phylum Mollusca.

Euglena Characteristics & Structure | What is the Classification of Euglena?

Crustacean Types, Examples & Characteristics | What is a Crustacean?

Octopus Classification & Characteristics | What is an Octopus?
Related Study Materials

Euglena Characteristics & Structure | What is the Classification of Euglena?

Crustacean Types, Examples & Characteristics | What is a Crustacean?