There are multiple units of measurement that are used to describe an electrical system. For instance, current and voltage are two forms of measurement used to describe properties of electricity that are often confused with one another. Current can be described as the flow of charges. For instance, if electricity were a falling ball, current would be the speed at which the ball passes a determined point between its drop and land point. Voltage is often compared to force. Using the same analogy, voltage would be the gravity that is pulling the ball towards the ground. These differences are summarized in the following table:

Voltage, current, and resistance are all related. Resistance (measured in Ohms) prevents current from being able to flow. If a ball were dropped into water, it would not reach the floor as quickly as if it were dropped in air because the water creates resistance. The relationship between resistance (R), current (I), and voltage (V) can be described mathematically:

In this equation, voltage is also referred to as the potential difference, which is the difference in energy occurring at two different points along a circuit. Voltage and current can be graphed on a voltage vs. current graph, which depicts voltage on the x-axis and current on the y-axis. A voltage vs. current graph may be portrayed as a current vs. potential difference graph. In this instance, the x-axis represents the current and the y-axis represents the current.

Michael is calculating the resistance in his circuit. Using the proper equipment, he measures the amplitude and voltage of the system. Michael finds that his circuit has a voltage of 0.4V and a current of 0.7A. Knowing that the material he uses supports a linear relationship between voltage and current, he calculates the following resistance:

Using the provided equation, Michael finds that his circuit has a resistance of 0.57 Ohms.

Slope of Voltage vs. Current Graph 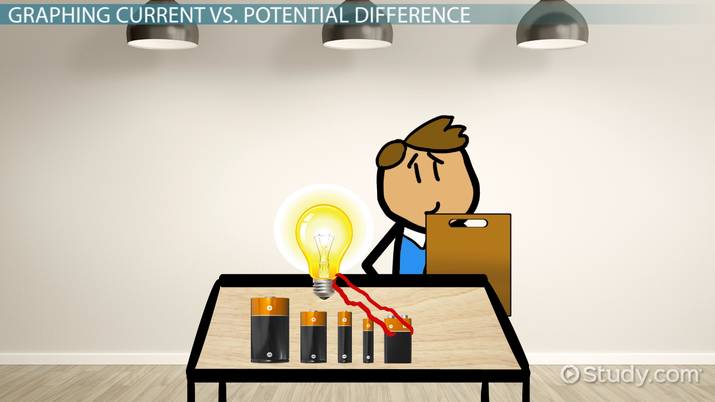 Try it now
Back
Coming up next: Finding the Equivalent Resistance: Series, Parallel & Combination Circuits

The equation provided above reflects Ohm's Law, a mathematical relationship between current, voltage, and resistance first described by Georg Simon Ohm. Ohm's law can be rearranged as needed to solve for any of the 3 included variables. This equation is particularly helpful for determining resistance. Both voltage and current can be easily measured with a voltmeter and ammeter respectively. Because the relationship between these variables is relatively simple to compute, people today often use a multimeter, which measures current and voltage and calculates resistance at the same time.

Ohm's Law graphs can resemble the voltage vs. current graphs mentioned above and are used to depict changes in resistance. If resistance remains constant, the Ohm's graph will appear as a voltage vs. current graph with a slope of 1, meaning that voltage and current are increasing proportionately. However, the slope of an Ohm's Law graph may change depending on the type of material used within a circuit.

When the slope of an Ohm's Law graph (and subsequently the resistance of a circuit) remains consistent, the circuit is composed of Ohmic material. Ohmic materials adhere to the equation provided in Ohm's Law and include materials such as metals, wires, and resistors. When the resistance of a circuit does not remain the same, the conducting material is non-Ohmic. This includes materials such as electrolytes, diodes, and filament lamps. Each non-Ohmic material can produce a unique Ohm's Law graph.

Current is the flow rate of charges through a circuit while voltage is the force pushing charges through a circuit. They are related through Ohm's Law, which states that voltage is equal to the current multiplied by the resistance. Resistance prevents current from flowing throughout a circuit. On a voltage vs. current graph, voltage is depicted on the x-axis in volts and current on the y-axis in amps. The inverse of the slope is equal to the resistance. Potential difference is the amount of voltage that differs between two spots in a circuit. On a current vs. potential difference graph, potential difference is displayed on the y-axis in volts and current on the x-axis in amps. The slope of the line is equal to the resistance. Voltage, current, and resistance can be measured with a multimeter.

What does the slope of the current vs. voltage graph give?

What is the relationship between voltage and current?

Current, voltage, and resistance are related through Ohm's Law. Voltage is equal to the resistance of a circuit multiplied by its current.

What is the relationship between current and voltage graphs?