Most animals, including human beings, give rise to a new individual through sexual reproduction. This type of reproduction involves the fusion of the male and female gametes. The name given to the male gamete is the sperm, while the female gamete is the ovum or an egg. During sexual intercourse, the male releases the sperms into the female body. Sperm stay alive for up to five days after entry. The sperms usually swim towards the oviduct, searching for a released mature egg. A mature egg (secondary oocyte) in females is usually released by the ovarian follicle, also known as the Graafian follicle. The period within which a matured egg is released is termed as ovulation. Once the sperms reach the released mature ovum/egg, fusion occurs. Only one sperm is needed to fuse with one egg.

If a mature ovum were to be fertilized by more than one sperm, there would be an extra total number of chromosomes in the resulting offspring. This condition would be detrimental, and therefore, to prevent this, an ovum can change its membrane structure after the entrance of one sperm. In non-mammals, a fertilization membrane or envelope is formed around the plasma membrane of the fertilized egg. It is usually a hard covering that prevents any entry of sperms into the after the fertilization process has occurred. 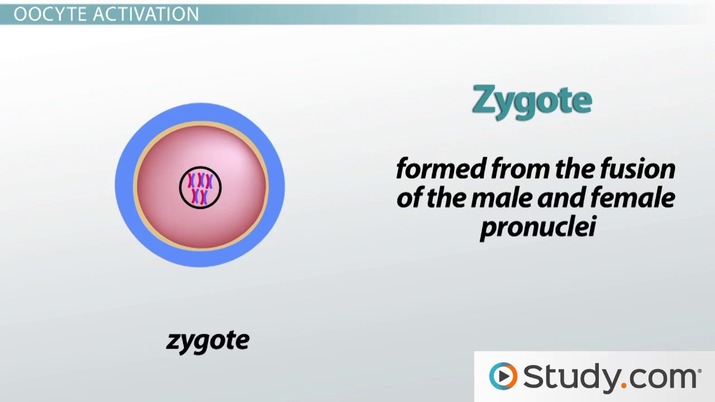 Coming up next: Early Embryonic Development: The Morula and Blastula

Various events occur during fertilization in most animals. These events can slightly differ between mammals and non-mammals. However, the main events include:

1. The contact and recognition of the male and female gametes.

This event occurs after the sperms have been deposited inside the female body. They swim towards the released matured ovum in the oviduct. As the sperms swim inside the female body, their maturation process is initiated. Their motility and ability to produce enzymes necessary to digest the ovum wall are established. This process is known as capacitation. The ovum releases chemoattractant that draws sperms towards it. Only sperm of the same species as the female can fertilize the egg. However, this might be different in some animals, e.g., horses and donkeys.

The matured egg has a plasma membrane surrounded by an outer covering. In mammals, this covering is referred to as zona pellucida. It contains some glycoprotein receptors that recognize sperms of the same species. In non-mammals, the ovum plasma membrane is surrounded by a thin membrane known as the vitelline membrane. Another thick layer, known as the jelly coat, surrounds the vitelline membrane in some animals, such as sea urchins.

2. Regulation of the Sperm Entry into the Ovum.

Only one sperm is needed to fertilize a mature egg. However, a condition known as polyspermy can occur, and the egg gets fertilized by more than one sperm. This results in detrimental effects to the new individual since they possess an extra number of chromosomes. To prevent this, a fertilization membrane is formed after the entry of one sperm into the ovum. This prevents other sperms from penetrating the ovum. In addition, the entry of one sperm causes the ovum to release enzymes that inactivate the sperm receptors on the surface of its outer covering. This also hardens the zona pellucida, thus preventing the occurrence of polyspermy. These phenomena that prevent polyspermy from occurring are generally termed polyspermy block. It should be noted, only the head of the sperm enters the ovum.

3. Activation of the Ovum

The entry of sperm into an ovum leads to the activation of various activities inside the ovum. Once a sperm enters an ovum, this leads to the flow of calcium ions inside the egg. These ions stimulate the egg nucleus. Some changes that occur include aerobic respiration, activation of protein and enzymes, and polyspermy block. At this point, the ovum is usually at the first stage of meiosis, and the entry of the sperm makes the egg complete the meiosis II process. Completion of meiosis II leads to the formation of the female pronucleus.

4. Fusion of the male and female gametes.

Once the sperm head is inside the ovum, it swells and forms a pronucleus. The male and the female pronucleus, which are haploid, fuse to form a diploid zygote. The synthesis of DNA also occurs in the preparation of cell division of the formed zygote.

Oocyte and Stages of Oocyte

The ovaries in the female reproductive system are responsible for the production of the ovum, and it is in this place where meiosis takes place. The process in which eggs/ova are produced is known as oogenesis. An oocyte is an immature female gamete.

The process of ovum production starts with the meiosis of a diploid germ cell in the ovary known as oogonium. Meiosis I of this cell leads to the production of two daughter cells, in which they both have unequal amounts of cytoplasm. The daughter cell with a higher percentage of cytoplasm becomes a primary oocyte while the other daughter cell becomes a non-sex cell called a polar body.

In humans, meiosis I continue to occur in females after puberty, while meiosis II occurs during the fertilization process. It should be noted, meiosis I in humans begins in the tissues of the ovaries while the embryo is developing and stops before birth. This phenomenon then continues after puberty.

The zygote formed after fertilization can divide and give rise to any cells, thus, it is totipotent. The division/cleavage of the zygote begins immediately after it is formed. Its division increases the number of cells and not the embryo's size since no cell growth is involved.

Firstly, the zygote divides mitotically, forming a two-celled embryo. These two cells further divide to form a total of four cells. The formed cells continue dividing and increasing cells, referred to as blastomere. A morula is formed once the number of cells reaches 32. At this stage, the cells appear as a solid ball.

Once the cell number reaches 64 and above, it is typically called a blastula. A blastula is characterized by a fluid-filled cavity called the blastocoel. A blastula then develops into a gastrula, which is a three-layered embryo. The three layers of the embryo are ectoderm, mesoderm, and endoderm. The term embryo is generally used between the first and the second month. In addition, the process in which the gastrula is formed is referred to as gastrulation.

A mature egg (secondary oocyte) in females is released by the ovarian follicle, also known as the Graafian follicle. The period within which a matured egg is released is termed as ovulation. Then, the fusion of the sperm (male pronuclei) and the mature ovum/egg (female pronuclei) is fertilization. This process occurs in the fallopian tube or the oviduct and leads to the formation of a zygote. The major fertilization events are; the contact and recognition of the male and female gametes, regulation of the sperm entry into the ovum, activation of the ovum, and fusion of the male and female gametes.

Only one sperm is needed to fertilize a mature egg. Polyspermy refers to when one ovum is fertilized by more than one sperm, which leads to a lethal condition. Polyspermy block prevents fertilization of an ovum by multiple sperms through deactivation of sperm receptors, hardening of zona pellucida, depolarizing the fertilized egg, and formation of a fertilization membrane. Entry of sperm into the ovum activates the secondary oocyte to complete meiosis II. It also activates enzymes and proteins, aerobic respiration, and polyspermy block. Immediately after the zygote is formed, it undergoes cleavage. Its cleavage results in blastomeres, morula, and blastula. Blastula gives rise to gastrula, a three-layered embryo. The term embryo is used to refer to the first and the second month after fertilization.

How does the fertilization membrane form?

Is ovum and oocyte the same thing?

Is an oocyte an egg?

Where is an oocyte fertilized?

A secondary oocyte or a mature egg/ovum is usually fertilized in the oviduct. This hollow tube is also referred to as the fallopian tube.

Tubular vs. Alveolar Glands | What is Tubular Secretion?