What is an Optical Telescope? 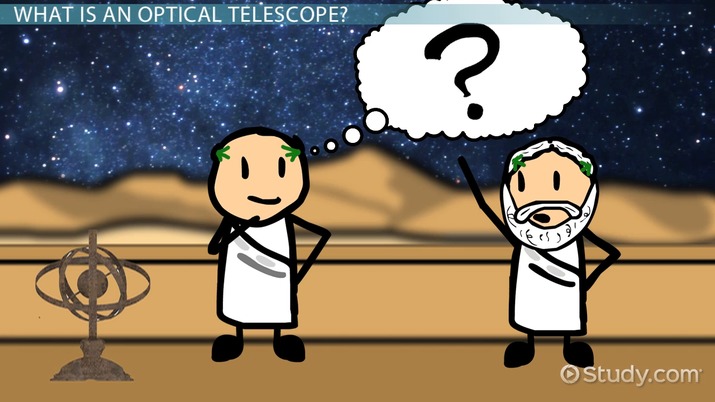 The earliest telescopes relied on lenses for magnification. The use of lenses in this way dates back to the Ancient Greeks but it was not possible to manufacture good quality lenses. It wasn't until the invention of eyeglasses in the 13th century that widespread manufacturing of lenses for this use began.

In 1609, Italian astronomer Galileo Galilei began constructing his own telescope. His telescope consisted of a convex objective lens and a concave eyepiece. He spent several months refining and improving his design and was able to increase the magnification from three times to 23 times. Galileo then began making astronomical observations with his telescope. He discovered the moons of Jupiter, observed the topography of the moon and tracked sunspots. In this way, Galileo revolutionized astronomy.

Some interesting telescope facts include:

The important features and properties of a telescope are:

The earliest kind of optical telescope was a refracting telescope. These use one or more lenses to refract the incoming light.

These telescopes work on the principle of refraction. When light passes from one medium to another with a different density, it refracts or bends. Light entering the telescope passes from the air to the lens, called the objective lens, and is refracted, focusing it on the eyepiece. The simplest refracting telescope contains only the objective lens and the eyepiece; however, they can come in many different configurations.

Reflecting telescopes use mirrors to gather and focus light. A primary mirror reflects light back to a focus. The primary mirror is usually concave or parabolic, as shown in the diagram. A small mirror then reflects the light into the eyepiece.

A catadioptric telescope is one which combines the best features of both refracting and reflecting telescopes. This means that they use both lenses and mirrors to create an image. This type of telescope generally has a spherical primary mirror, a thin correcting lens and an eyepiece. This lens corrects any spherical aberration while adding minimal chromatic aberration. This results in a relative aberration-free field of view.

Catadioptric telescopes have been widely used in astronomy. The largest telescope of this type is the James Gregory telescope which is used for the study of black holes.

The first telescopes were refracting telescopes. The technology for producing good quality lenses, introduced after the 13th century, allowed this type of telescope to be built. Galileo improved the design and was able to use his telescope to make astronomical observations for the first time.

Why are telescopes used?

What are interesting facts about telescopes?

The first telescopes were used to watch for incoming ships. Merchants wanted to be the first to see incoming ships so that they could sell their products first.

Why is the telescope important?

The telescope is important because it has a wide variety of uses. Telescopes can be used in areas such as astronomy, aviation, navigation and in military applications.

What is an optical telescope used for?

An optical telescope is used to help see distant objects easily. They gather and focus visible light to create magnified images of objects.

How does an optical telescope work?

A telescope uses mirrors or lenses to reflect or refract light to a single point, called the focal point, forming an image. An eyepiece is then used to view the image. They can be used to make very far away objects appear larger.

Facts About Stars | The Study of Stars

The Apparent Motion of Stars & Planets

Parts of a Rocket: Lesson for Kids