The muscles of the face work together to carry out a variety of functions, including facial expressions and the motions associated with eating and talking. Referred to scientifically as the labium oris, the lips are especially important in terms of expression, talking, and eating. While movement of the lips is controlled by a number of different muscles and structures, the primary muscle responsible for the action and function of the lips is the orbicularis oris.

Innervation refers to the nerve supply for a particular muscle, tissue, or structure. Innervation allows muscles to contract and perform the movements associated with a structure. The orbicularis oris muscle is innervated by the motor branch of the facial nerve. The facial nerve is derived from cranial nerve VII (CN VII) and consists of five branches. The buccal and mandibular branches specifically innervate the orbicularis oris. The orbicularis oris receives its primary blood supply from the facial artery, which supplies blood to other structures and muscles of the face.

The main function of the orbicularis oris is to enable the mouth to close. However, the orbicularis oris also facilitates other types of movements associated with talking, kissing, eating, or making facial expressions such as anger. The orbicularis oris often works in conjunction with other muscles of the lips such as the levator labii, zygomaticus, and depressor labii muscle groups in order to carry out these movements. 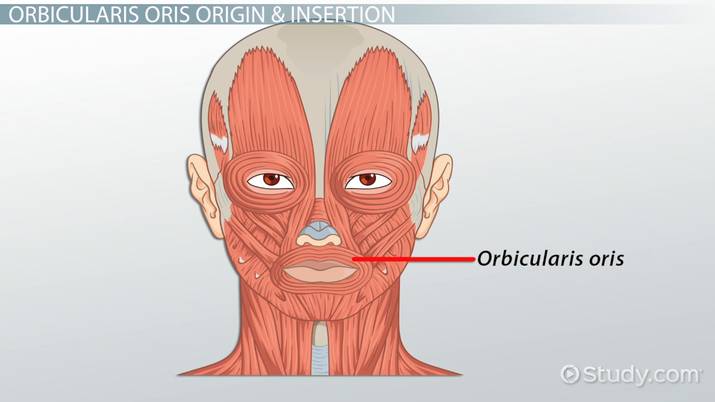 Coming up next: What Does the Risorius Muscle Do? - Definition & Function

The orbicularis oris possesses a number of important functions pertaining to speech, eating, and facial expressions. The deep layer of the orbicularis oris primarily functions as a sphincter for the mouth by constricting the lips when the muscle fibers contract. Contraction of this layer is also important for humans when chewing or swallowing foods and liquids, as well as when kissing, whistling, or playing musical instruments such as the trumpet, flute, or clarinet. The superficial layer facilitates fine motor movements associated with speech. For example, the orbicularis oris helps to control the contact made between the lips and the teeth in order to form different vowel and consonant sounds.

All muscles possess points of origin and insertion that enable the muscle fibers to perform actions related to the movement of different structures of the body. Most muscles originate and insert onto bony structures, with the origin occurring on the stable bone of a joint and the insertion located on the more mobile bone of a joint. A joint refers to the location where two or more bones meet. The orbicularis oris is unique because it lacks direct connections to bony structures. However, some individuals can possess anatomical variations in which several fibers of the orbicularis oris originate from the upper jaw (or maxilla) or the lower jaw (or mandible).

The deep layer possesses its origin on the modiolus, a structure made from fibrous connective tissue located at each corner, or side, or the mouth. The modiolus represents at attachment site for several muscles of the face, including the orbicularis oris. The fibers of the deep layer then curl in upon themselves to contribute to the formation of the vermilion, the pink or red part of the lips upon which lip balm, lip gloss, or lipstick is sometimes applied. The general insertion points for the deep layer consist of the upper and lower lips.

The orbicularis oris represents a ring-shaped muscle surrounding the mouth in humans. The muscle is comprised of two layers, a deep and a superficial portion. The deep layer is primarily responsible for the closure of the lips and mouth, while the superficial layer controls the fine motor movements associated with facial expressions and speech. The deep layer originates from the modiolus, a fibrous structure located at each corner of the mouth, while the superficial layer originates from the muscle fibers of other muscles associated with facial expression, such as the levator labii and zygomaticus muscle groups. Both muscles insert onto the upper and lower lips.

What action does the orbicularis oris allow?

What movement does the orbicularis oris control?

What is the function of the orbicularis oris?

The orbicularis oris possesses a number of important functions in humans. These functions include swallowing, eating, closing the lips, whistling, kissing, and playing instruments such as the flute or clarinet.

Create an account
Orbicularis Oris Action, Origin & Insertion | What is the Orbicularis Oris?
Start today. Try it now
Muscles of the Body for Health Professionals