What is an Oxbow Lake?

Rivers exist across landscapes, carrying rainwater from higher altitudes down into streams, lakes, and eventually the ocean. Occasionally, there are lakes side by side with rivers and many of them are a similar curved crescent, horseshoe, or U-shape. These curved shapes are called "oxbows." What is an oxbow lake? 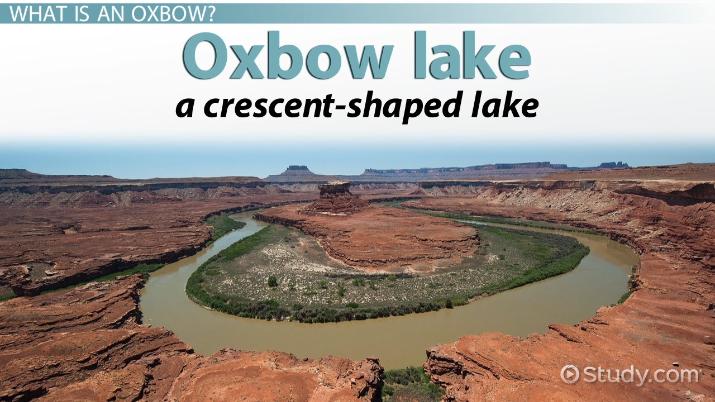 How is an Oxbow Lake Formed?

Oxbow lakes are created through erosion and deposition processes that occur in rivers that run through soft landscapes. The curved snaking shape of a river is called a meander. Throughout meanders there are banks along the edges where either erosion or deposition occur. Deposition occurs along the inside bank of a river's meander, where the slower moving waters leave behind sediments and rock. Erosion occurs along the outside bank of a meander where fast moving waters break up and carry away sediments. These two actions of eroding and depositing sediments along banks cause rivers to meander, and eventually create oxbow lakes through a series of steps that occur at the neck of a meander. Additionally, earthquakes can cause rivers to change course and form oxbow lakes, and sometimes rivers are artificially manipulated to follow a straighter path, forming artificial oxbow lakes near them.

But how exactly does a river end up meandering in the first place? Why do rivers snake through landscapes?

When rivers are flowing down from mountains, their path tends to stay same because of the hard and rocky material that guide and channel the waters down the mountain. However, once a river makes its way to a plane or a flatter landscape where there are more soil and sediments, the river becomes dynamic and changes through the processes of erosion and deposition that occur along the river's edges.

There are rarely straight lines in natural landscapes, so any slight disturbance or imperfection along a straighter channel of a river will result in the flow of water slightly changing directions. For example, a slight indentation along the edge of a river created by erosion of softer material (or the action of an animal) will cause the rushing water to continue into the edges of the indentation, continuing to erode it. The more sediments are swept away, the larger the indentation gets, and more water and mass is allowed to flow through the indentation. The larger the indentation gets, the more water is diverted into the sediment, continuing to erode it. Because water is diverted to one side of the river, the water is slower on the other side of the river, opposite the indentation. Slower waters cannot carry sediments as well as fast-flowing water, so deposition begins to build up opposite the eroded indentation. A slight meander has formed.

The fast-moving water along the newly-formed outside bank sweeps out of the indentation and continues its path, carrying its momentum across the channel and slamming into the opposite bank, where it begins to erode another curve. Deposition then builds up opposite of this curve, and the process continues. But how does a meander become an oxbow lake?

Narrowing of a Meander Neck

As a river begins to curve and snake, if there is nothing in the way, the meanders will continue to become more pronounced. As the meanders become more curved, the landscape between two curves becomes narrower. This narrowing of the landscape between two meanders creates the situation where two eroding banks of the same river begin to erode toward each other, and the neck gets narrower.

After an oxbow lake forms, it can either remain a lake, turn into a marsh, or dry up all together.

The oxbow lake diagram below shows the steps that lead to the creation of an oxbow lake:

Below are some examples of oxbow lakes:

Oxbow lakes are usually curved, U-shaped lakes which form through the meandering actions of rivers. Rivers meander because of the processes of erosion and deposition, where sediments are taken away from the bank of the river forming a curve, and deposited on inside banks due to slower-flowing waters. As river meanders become more pronounced and curved, the two outside banks of one or two meanders may eventually erode toward each other. As the banks between the meanders continue to erode, the neck of land between them becomes narrower. Eventually, the neck of the meander is eroded completely and the river cuts a new, straighter path. As the river follows the path of least resistance (i.e., straight), it deposits sediments along its banks between it and its former meander. The deposition builds up to the point that the former meander is completely cut off from the river channel, forming an oxbow lake.

What are the three oxbow lakes?

There are more than three oxbow lakes in the world. So there are no "three" oxbow lakes. But it is possible to summarize the formation of an oxbow lake in three steps:

(1) A river meanders, and erosion and deposition make the meanders more pronounced. (2) Two sides of a meander or two erode toward each other until the neck of land between them is eroded away, and the river follows a new path. (3) Deposition builds up along the banks between the river channel and its former meander, eventually cutting the meander off from the river channel completely, forming an oxbow lake.

What do you mean by oxbow lake?

An oxbow lake is a U-shaped lake that was formerly a meander in an adjacent river. "Oxbow" describes the U-shape of a meander or curved, snaking path of a river. When a meander is cut off from the rest of the river, it becomes an oxbow lake.

How is an oxbow lake formed step by step?

(1) Rivers meander because of the processes of erosion and deposition, where sediments are taken away from the bank of the river forming a curve, and deposited on inside banks due to slower flowing waters.

(2) As river meanders become more pronounced and curved, the two outside banks of one or two meanders may eventually erode toward each other. As the banks between the meanders continue to erode, the neck of land between them becomes narrower.

(3) Eventually the neck of the meander is eroded completely and the river cuts a new, straighter path.

Drainage Basin System & Examples | What Is a Drainage Divide?

How are Volcanic Mountains Formed? - Lesson for Kids

The Effects of Deposition on Shoreline Features