Mark Lewis, Cameron Smith
Read what a p-series is and some examples of it. Learn the harmonic series and the p-series test for convergence to prove if it is convergent or divergent. Updated: 01/22/2022

A {eq}p {/eq}-series is any one of a family of infinite series whose terms are reciprocal powers of natural numbers. The parameter {eq}p\in\mathbb{R} {/eq} specifies the power, which defines the series.

Any {eq}p {/eq}-series can be expressed in summation notation using the following general formula:

For example, if we choose the power {eq}p=2 {/eq}, the corresponding {eq}p {/eq}-series is the sum of all reciprocals of perfect square numbers:

The series which consists of the sum of the reciprocals of all natural numbers is known as the harmonic series. Its general formula, and calculation term-by-term, are

There is no easy way to calculate the exact sum of a given {eq}p {/eq}-series, though the value of some specific series have been determined. For example the exact value of the series for {eq}p=2 {/eq} is

The {eq}p {/eq}-series test can at least determine whether or not a particular series converges at all, and an approximate value can then be found by adding up terms in the sum. 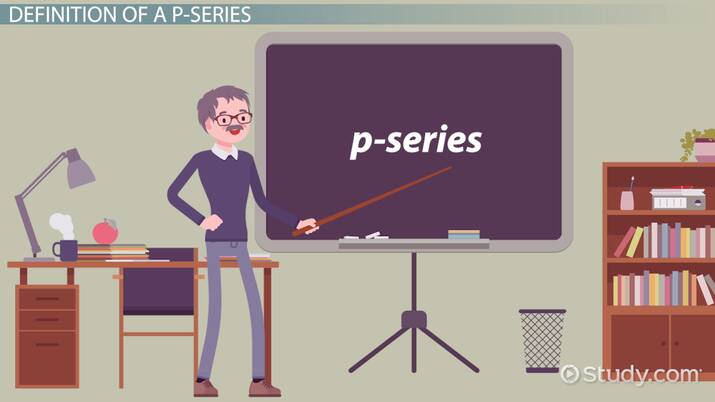 Coming up next: Harmonic Series in Math: Definition & Formula

will converge if {eq}p>1 {/eq}, otherwise it will diverge.

This rule for {eq}p {/eq} series is consistent with our earlier example with power {eq}p =2 > 1 {/eq}, which we saw was a convergent series.

The terms of the harmonic series quickly become very small numbers. If you try adding them up, it may seem that the sum is going to converge. Nevertheless, as more terms are added the sum will grow very large - but very slowly!

Similarly, according to the rules of roots and exponents, we can recognize that

We can separate this sum into two distinct series, and analyze the convergence of each one individually. We have

Now we can see that this series is actually the sum of two different {eq}p {/eq}-series. The first converges since its power is {eq}p=2>1 {/eq}, but the second is the divergent harmonic series, with {eq}p=1 {/eq}.

Since one part of the series is divergent, the overall series also diverges.

In this lesson we've learned how to recognize {eq}p {/eq}-series, whose terms are reciprocal powers of natural numbers. Determining the convergence of series of this type has applications in the field of calculus.

for some fixed power {eq}p\in \mathbb{R} {/eq}. The special case of {eq}p=1 {/eq} is also known as the harmonic series. The convergence or divergence of a {eq}p {/eq}-series can be determined using the {eq}p {/eq}-series test. If the power in the denominator satisfies {eq}p>1 {/eq} then the series converges, otherwise it diverges. The convergence test can be applied to a a variety of series is we recall to express roots as powers, and to decompose rational expressions into separate terms where possible.

What is the P series formula?

All p-series can be represented as the infinite sum of the reciprocal powers of the natural numbers. The general formula is the sum of 1/n^p for n between 1 and infinity.

What is a convergent p series?

An infinite series converges if the limit of its sum approaches a specific finite value. p-series converge when the power appearing in the denominator of each term satisfies p>1.

What is the P series test?

The p-series test can be used to determine if a p-series converges or diverges. It converges if, and only if, the power satisfies p>1.

How do you know if a series is P series?

The terms in a p-series are reciprocal powers of natural numbers. This means they have the form 1/n^p for some fixed power p.

Ratio Test Formula & Series Convergence | What is the Ratio Test?