What is a parallel circuit exactly? Electricians and physicists define a parallel circuit as one in which each component is connected in its own branch or loop directly to the source of electricity. When the circuit is closed (with no breaks) this provides multiple different paths through which the electricity is able to flow at the same time. In an open parallel circuit, there is a break somewhere in the pathway, but since each branch is its own independent path, a break in one branch does not effect the devices in another branch. This is shown in Figure 2, which shows a simple parallel circuit. 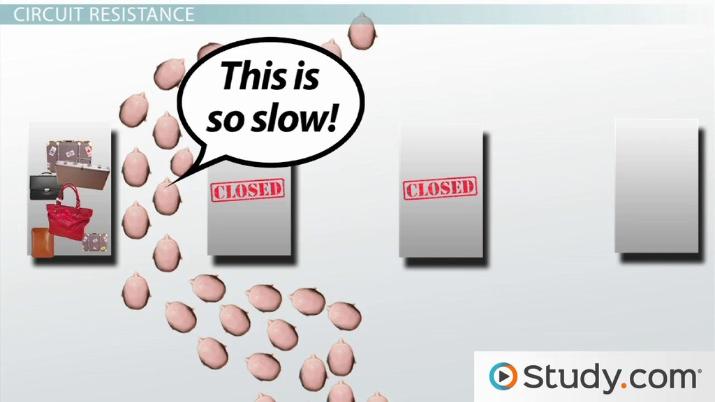 Try it now
Back
Coming up next: Series Circuits: Definition & Concepts

Just what does a parallel circuit look like? The parallel circuit illustration in Figure 3 shows that each component of the electrical circuit is connected from both ends of the component directly to the source of electricity, creating its own loop or branch. Each place where a loop branches off is called a node. The current flows from the electrical or voltage source (V), usually a battery, through the nodes to each component (labeled R for resistor in the diagram) and then back to the source. So some of the current is flowing through all the components at the same time. Because each branch is independent of the others, if there is a break in one of the branches it will not effect the other components of the circuit.

There are three important properties of parallel circuits: current, voltage, and resistance.

Voltage is the result of differences in electrical potential energy. This provides the force that causes electricity to move or flow through a circuit. The more electrons there are the greater the electrical potential energy. In a parallel circuit, each component is directly connected to the power sources so the voltage at each component is the same as the source voltage.

This relationship between current, voltage and resistance is represent by the following mathematical model, or formula:

This formula can be used to calculate the current. If the voltage of a given circuit is 9v and the total resistance is 3, then according to Ohm's Law I = 9/3 or 3 amps

Since Ohm's law says the I = V/R, the total resistance can be written as:

Factoring out the V from each term on the left gives the following:

This information can be used to determine the amount of total resistance and the current for the following parallel circuit:

The voltage in this circuit is 2V. The total resistance is found using the formula from above:

How do you know if a circuit is parallel or series?

You can determine if a circuit is a parallel or series circuit by looking at connections and components. If both ends of each component are connected directly to the battery or source of electricity with no other component in between, then it is a parallel circuit.

What is the difference between series and parallel circuits?

What is the current in a parallel circuit?

The current in an electrical circuit is the flow of electricity. In a parallel circuit the total current is the sum of each branch or loop of the circuit.

What is a parallel circuit and how does it work?

Ammeter Function & Explanation | What is an Ammeter?

Voltmeter Uses & Measurement | How to Use a Voltmeter

Effects of Electric Currents on the Human Body

Ammeter Function & Explanation | What is an Ammeter?

Voltmeter Uses & Measurement | How to Use a Voltmeter

Effects of Electric Currents on the Human Body