Copyright
Yazan Hamzeh, Meg Desko
What is a peptide bond? Learn the types, structure, and formation of the peptide bonds between amino acids. Understand proteins as a polymer of amino acids. Updated: 07/26/2021

What type of Bond is Formed Between Amino Acids?

Amino acids are composed of a central carbon atom bonded to a hydrogen atom and a functional R group, which determines the amino acid identity, and a carboxyl group on one side and an amino group on the other. Upon peptide bond formation, the carbonyl group of the first amino acid loses a hydroxyl (OH) and the amino group of the second amino acid loses a hydrogen (H). This process is known as dehydration, and forms a covalent bond between the two amino acids involved, known as the peptide bond, and generates a water molecule in the process. 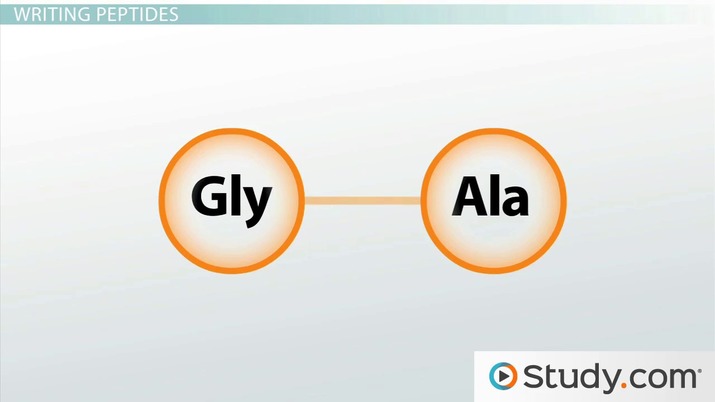 Coming up next: Proteins III: Structure and Characteristics of the 20 Amino Acids

A protein molecule is generally composed of a multitude of amino acids, or peptides, linked together via peptide bonds. The human body makes use of 20 naturally occurring amino acids. Proteins differ in the number and type of amino acids they possess.

Protein nomenclature can be dependent on the number of peptides they encompass. For example:

What is a Polymer of Amino Acids?

Is Protein A Polymer?

A protein is said to be a polymer of amino acid monomers. The specific order in which amino acids are bonded is crucial to assemble the protein in a particular manner which is necessary for protein function. Upon protein assembly in the cytoplasm, multiple cellular checkpoints occur to ensure the sequence of amino acids is correct. Mutations in the genetic code or DNA, which provides instructions on the assembly of every protein, could cause a change in the protein's primary structure and hence its shape and function. For example, sickle cell disease is brought upon by a change in the DNA sequence which gives rise to coding the valine amino acid instead of glutamine. This results in impairment in beta-globin structure, which is detrimental to red blood cell functions.

As mentioned earlier, the formation of a peptide bond between two amino acids brings about the formation of a molecule of water. As a carboxyl group loses its hydroxyl (OH) and an amine group loses its hydrogen (H) atom, they combine to form one molecule of water for each peptide bond. This process is reversible; peptide bonds can be broken by the addition of a water molecule. The water molecule restores the hydroxyl (OH) to the carboxyl group and a hydrogen atom to the amine group, thus giving rise to two separate individual amino acids per peptide bond and releasing energy. This process is referred to as a hydrolysis reaction.

Deoxyribonucleic acid (DNA) serves as the code that dictates protein expression in both eukaryotic and prokaryotic cells. DNA is made of a sugar (deoxyribose), a phosphate group, and a nitrogenous base. The sugar and phosphate molecules together form what is called the sugar-phosphate backbone of DNA, which anchors to the nitrogenous base and gives it the ability to form hydrogen bonds with nitrogenous bases of the complementary DNA strand. Recent scientific breakthroughs allowed the development of peptide nucleic acids (PNAs). PNAs are man-made DNA look-alike substances, in which the sugar-phosphate backbone is replaced with a peptide polymer. Because of their flexible and uncharged nature, they bind to complementary DNA strands in a very efficient manner. Therefore, PNAs are used in research and diagnostic settings, in which they are employed in hybridization assays.

How do you identify a peptide bond?

A peptide bond is occurs between the carboxyl group of one amino acid and an amine group with the other amino acid.

How do two amino acids bind?

What is Fatty Acid? - Composition & Structure

Effect of pH on Enzyme Activity

Dipeptide Formation, Structure & Examples | What is a Dipeptide?