Maya Welch, Adam Richards
Learn about the controversial and costly Pequot War of 1637. Discover who won the Pequot War and the results of the devastating Pequot massacre of 1637. Updated: 01/26/2022

The Age of Exploration in Europe marked a period where European countries sought new lands for God, gold, and glory. In the 17th century, explorers sailed the seas in search of resources, new trade routes, and land. France, Spain, the Netherlands, and England gained a presence in North America and established colonies across the continent.

European colonization caused tension between settlers and Native Americans whose land was being colonized after hundreds of years of indigenous occupation. The English established colonies along the Atlantic coast of North America with Jamestown in present-day Virginia becoming the first permanent English settlement. England continued to send settlers to North America, including the Puritans who sailed over in search of religious freedom and landed at Plymouth Rock in 1620 in present-day Massachusetts. As the colonial population grew, English settlements expanded and European colonizers established the Connecticut Colony. 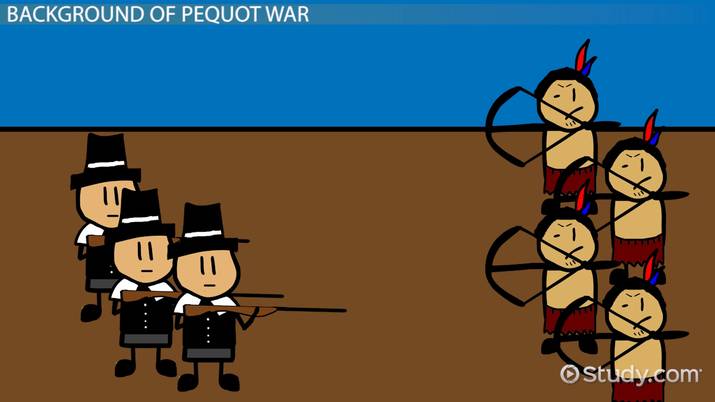 Try it now
Back
Coming up next: Peter Stuyvesant: Biography & Facts

Who Were the Pequot?

The Pequot Nation occupied approximately 250 square miles of what is now southeastern Connecticut for thousands of years. The Pequots expanded their power at the beginning of the 17th century, bringing more tribes under their jurisdiction and establishing a confederacy of tribes in order to gain control of the fur and wampum trade. By 1635, the Pequots had expanded their control through war, diplomacy, and intermarriage. The Pequot were originally a single tribe with the Mohegan, with a population numbering around 6,000 in the early 17th century. However, their numbers were almost cut in half after two significant events, the Mohegan separating for their independence and the smallpox epidemic in 1633.

In the beginning, around 1620, there was a period when the Pequots and English colonists engaged in peaceful trade along with the Dutch who also had trade influences in the region. Other Native American tribes were resentful of Pequot control of trade and their relationship to the Dutch. However, as English colonists neared and encroached on Pequot land, tensions increased and so did Pequot resentment of the Europeans. Pequot territory was already reduced from its original boundaries, and growing tensions over the occupation of land and trade driven by Puritan expansion led to a larger conflict between the Pequots and the English settlers.

What Was the Pequot War?

What was the Pequot War? The Pequot War definition is described as the 17th-century conflict between the Pequots, English settlers, and other Native American tribes that allied with both sides. The war was the result of decades of tension between the Pequots and other Native American tribes in the region that was exacerbated by Dutch and English competition over trade.

What caused the Pequot War was the rising tension between English settlers and the Pequots over Pequot tribal lands and control of trade. The English wanted to intervene and dethrone Dutch-Pequot control of the fur and wampum trades in the region.

When was the Pequot War? The Pequot War lasted from 1636 - 1638, though tension and fighting occurred before the official start of the war. The killing of a Boston trader on Block Island angered English settlers and a group of Massachusetts colonists went to retaliate.

Warfare and combat of the Pequot War took place mainly in raids that were carried out between forces. After the Endicott Raid of soldiers from Massachusetts, the Pequot retaliated in a surprise attack at Saybrook, CT. Pequot forces attacked the encampment at Saybrook and destroyed fields, cattle, and warehouses. After that, the Pequots also attacked the Wethersfield, CT encampment, which was when English colonists determined they finally had grounds to declare war on the Pequot. The Connecticut Colony formally declared war on the Pequots in 1637.

The Pequot Massacre of 1637, also known as the Mystic Massacre of 1637, was a major turning point in the Pequot War. After Endicott's Raid, the Pequots carried out raids on different English settlements. Mohegan and Narragansett aided English forces, leading them to a fortified Pequot village in Mystic, CT. Before dawn, the English attacked and the Pequot quickly went on the defensive. Pequot homes and the fortification itself were set on fire. It is estimated that this massacre killed anywhere between 400 to 700 Pequot men, women, and children. It is probable that most of them were burned to death or shot running away from the flames. The Pequot Massacre further diminished the population leaving less than half of the Pequots surviving.

The Pequot War ended in 1637 with the Fairfield Swamp Fight after the Pequot Massacre. Pequot warriors who were not in their fortified village at the time of the Pequot Massacre were preparing to fight at another location. When they received word of the events at Mystic, they fled. The English eventually located the Pequots amongst the Sasqua and Pequot civilians were given a chance to surrender. This battle marks the end of the Pequot War since the Pequots were no longer able to keep fighting.

The Pequot War ended with the signing of the Treaty of Hartford in 1638. The treaty resolved that the Pequot tribe and tribal name would be banned by the British. Many of the surviving Pequots were forced into slavery and sent to other colonies to work in English households. The Pequot War's significance marks the negative impact of European colonization on Native Americans on a large scale. As European colonization continued, so did the erasure of Native American culture and the destruction of native populations.

After suspicious killings of English traders, the English moved in on the Pequots from Massachusetts in the Endicott Raid. The attacks on Block Island resulted in retaliation from the Pequots who raided English encampments in surprise attacks at Saybrook and Wethersfield in Connecticut. Towards the end of the war, English forces were led by members of the Narragansett and the Mohegan tribes. There, they launched a pre-dawn attack on the fortified Pequot village on the banks of the Mystic River, known as the Pequot Massacre of 1637. In 1638 the Pequot War officially ended with the Treaty of Hartford.

Why did the Pequot Massacre happen?

The Pequot Massacre was a military response from Pequot-initiated raids. The Narragansett and the Mohegan tribes, who were allied with the English and objected against Pequot power and influence, led English forces to the fortified Pequot village on the Mystic River.

Why was the Pequot War fought?

The Pequot War was fought over two predominant issues: trade and colonist expansion of territory. The Pequot were the leaders of a confederacy of native nations who formed to trade furs for European goods with the Dutch. The Dutch had a virtual monopoly on the fur trade until the 1630s when masses of English Puritans migrated to Massachusetts and Connecticut. The Dutch and Pequot fought the Puritans allied with the Mohegan and Narragansett tribes over control of the fur trade and land.

What was the result of the Pequot War?

Why did the Pequot attack a Connecticut village in 1637?

The Pequot laid siege to Saybrook, CT after the Endicott Raid committed by Massachusetts colonists. The attack was retaliation for what the Pequots viewed as an unprovoked attack of one of their villages.

What was the main cause of the Pequot War?

The main cause of the Pequot War was competition over control of trade and land. The English Puritans expanded into Pequot territory, which resulted in growing tension. The English also wanted stake in the fur and wampum trade in the region, which was already being controlled by the Dutch and the Pequot. The immediate causes include the killing of English traders and the deadly and violent raids from both sides that followed.

Who won the Pequot War?

The English Puritans of the Massachusetts Bay Colony and Connecticut won the Pequot War. They completely eradicated the Pequot Nation and gained control over trade with native nations, diminishing Dutch influence in the area.

Charter Colony Concept & Examples | What are Different Types of Colonies?