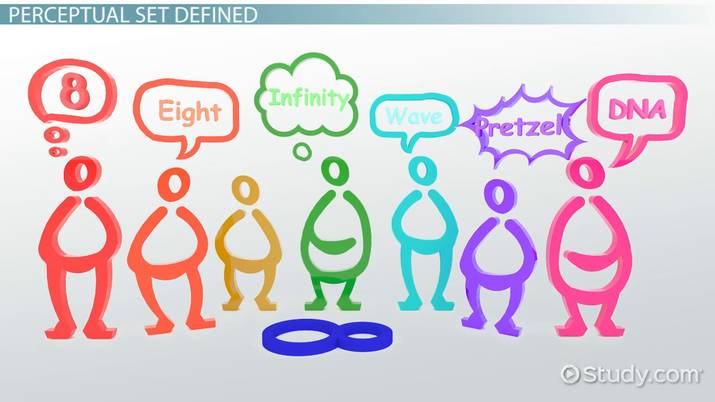 Coming up next: What is Bioinformatics?

To properly understand perceptual set, it is important to first discuss perception. Perception refers to the unique way individuals view and interpret the world around them. It is influenced by previous experiences, beliefs, and motivations. Perception is the process of taking in information through the senses and making sense of it. This happens automatically and without any conscious effort on an individual's part. The brain receives information from the world around it through the senses of sight, sound, smell, taste, and touch. If five people all listen to the same piece of music, they might each have a different perception of it. One person might find the music to be sad, while another person might find it to be happy. This is because everyone's variety of past experiences, beliefs, and feelings each play a role in filtering their perceptions.

Perceptual set theory refers to the notion of perception as a top-down process. Top-down processing happens when the brain sends signals to the sensory system as It receives new information. Using an individual's perceptual set and perceptual screen along with their senses, their brain can make informed decisions without analyzing every aspect of the situation.

A simple example of perceptual set would be if researchers asked ten participants to describe the same bouquet of flowers. The participants would likely give ten different descriptions, even though they would all be looking at the same flowers. This is because each person would have a unique perceptual set based on their past experiences, beliefs, and feelings. Some people may describe the color of the flowers, others might speak about the scent, and the final group may describe a memory that the flowers remind them of. This would be an example of perceptual differences. Perceptual differences occur when individuals are exposed to the same stimuli and perceive them in different ways.

One of the most famous kinds of studies related to perceptual set is an ambiguous figures study. In this kind of study, participants are shown a series of ambiguous figures, which are images that can be interpreted in more than one way. For example, one famous ambiguous figures study utilized a hand-drawn image that could be seen as either a duck or a rabbit. The results of the study have shown that people tend to see the image in accordance with their expectations. If they expect to see a duck, they are more likely to see a duck. If they expect to see a rabbit, they are more likely to see a rabbit. In addition, participants will see one animal more if they have had more experience with it. This shows that perceptual set can influence the way people see things, even when those things are ambiguous.

Another example of perceptual set in action is the Muller-Lyer illusion. In this illusion, the two lines appear to be different lengths, even though they are actually the same length. The reason for this is that perceptual set causes people to interpret the lines in accordance with their expectations. They expect the line with the arrows pointed inward to be longer than the line with arrows pointed outward, so they see them as being different lengths.

One place where perceptual set can be seen at work is in marketing. When a company releases a new product, they often use marketing to create a certain perception of the product in consumers' minds. For example, shoe manufacturers use marketing tactics to create the perception that their sneakers are high quality and will make you run faster. These marketing tactics work through manipulating people's perceptual sets related to their beliefs, culture and motivations.

Forces of Influence on Perceptual Sets

There are many forces of influence on perceptual sets. As mentioned before, past experiences are a major factor. The more experience people have with something, the easier it is for them to recognize it. This is why experts tend to be better at recognizing patterns and details than non-experts.

The people around us also play a role in shaping perceptual sets. If the peer group people associate with have a certain expectation, they are likely to adopt that expectation as well. This was well explored in the Asch Conformity Experiments.

Finally, beliefs and expectations also play a role in shaping perceptual sets. If people believe something is true, they are more likely to see it as being true, even if there's no evidence to support that belief. This is known as confirmation bias.

What Occurs When Experiences Influence our Interpretation of Data

Perceptual thinking is one of the basic forms of thinking that individuals use to interpret data according to what they can perceive with their senses. When individuals use their experiences to justify their perceptual thinking and perceptual set, this is known as their perceptual experience. In other words, people's experiences, beliefs, and prior knowledge can influence their interpretation of data, the way they see things, and the details they notice. For example, if a person has never been to Spain, but knows that Spanish people speak a certain language, then that person is likely to look for clues of that language in any Spaniards he or she encounters. This is because prior knowledge has shaped his or her perceptual set.

People's experiences influencing their interpretation of data can also be a powerful learning tool with the process of perceptual thinking. With perceptual thinking, people can have the ability to see relationships between things that they wouldn't be able to see if they just looked at the data itself. For example, when they look at a map of the world, they can see the relationship between countries. They can see how far apart they are and what kind of terrain they have. They can see which countries are allies and which countries are enemies. All of this information is important in understanding the world around us. Perceptual thinking allows people to see these relationships and makes it easier for them to understand complex data.

Individuals perceive the world in their own unique way, this is called perception. It is influenced by previous experiences, beliefs, and motivations. These forces create a cognitive bias called Perceptual set. All of our previous experiences influence our future experiences, our perception, and our perceptual set. The perceptual set psychology definition is "a predisposition to perceive or notice some aspects of the available sensory data and ignore others." Perceptual set determines the way people interpret things based on their expectations and past experiences. It influences the way they interpret ambiguous figures, understand data, and which details they tend to notice. Human beings tend to pay attention to some things and ignore others when faced with new information because of perceptual set. As mentioned, ten people may have different descriptions of the same flower bouquet due to perceptual set. This process of determining which information should be retained and which can be omitted is referred to as a perceptual screen. Also, this example shows Perceptual differences which occur when individuals are exposed to the same stimuli and perceive them in different ways. Perceptual set is a powerful tool that individuals use to make sense of the world around them. It is important to be aware of how it can influence the way people see things. Individuals can use this knowledge to better understand the world around them and to make more informed decisions.

Forces of influence on perceptual set include:

What is perceptual set theory?

Perceptual set theory refers to the notion of perception as a top-down process. Top-down processing happens when the brain sends signals to the sensory system as it receives new information.

What is an example of a perceptual set?

Perceptual sets cause us to pay attention to the details we think are most relevant and ignore the elements we feel are irrelevant. For instance, a student whose parents value education will likely work harder on assignments than those whose parents don't consider education necessary.

What is perceptual set influenced by?

Many things influence an individual's perceptual set. Past experiences play a significant role along with motivations, expectations, cultures, and beliefs; all impact our unique perceptual sets.

Activation-Synthesis Theory | What is the Cognitive Theory of Dreaming?