What Is Personal Space?

An important factor to consider in proxemics is whether a person resides in an individualistic nation versus a collectivistic nation. For instance, Jerry lives on a ranch in Texas in the United States of America. Personal liberties, along with open spaces, are important to him and define his comfort zone. Judy is an English teacher who was raised by her mother and diplomat father in Lima, Peru. In this country citizens have no problem standing while almost touching during conversations with one another, and to Judy this is a normal situation.

One factor which will almost certainly change the personal boundaries of humans across the globe is the pandemic which began in 2020.

A personal space violation can result in the victim of the violation:

In the most extreme cases, a person whose personal space has been violated may shout in anger at the offender, push the offender in the chest, or even resort to physical violence such as punching or tackling the person.

Now, personal space violations vary not only from person to person, but also from country to country and from culture to culture. For example, in America it has been commonly recommended to maintain a distance of one arm's length from others. However, in some European countries people often greet each other with kisses to the cheeks, and sometimes strangers even touch each other on the arms in public. 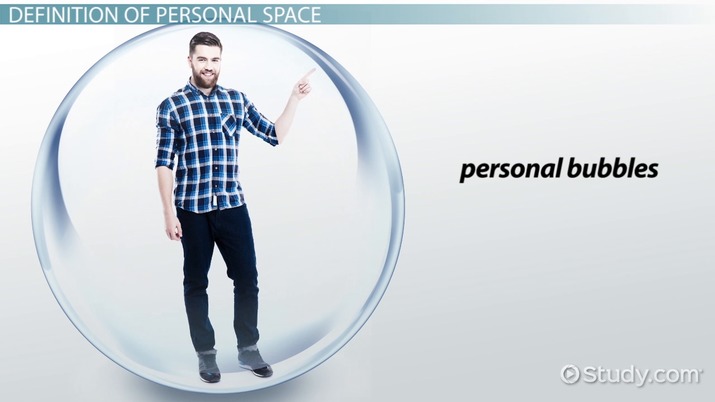 The three major variables that are at play when influencing proxemics are:

High population density, also known as social crowding, can greatly influence personal space. For example, Amelia visits Tokyo and rides the subway for the first time. She is surprised to find that people are packed into the subway car as tightly as possible, and citizens are literally leaning against one another. On the other hand, Amelia visits the Grand Canyon and is amazed while hiking at how much space she has between herself and other tourists. While leaning against a rail enjoying a view at an overlook, she is a bit startled when a man stands right next to her, as there exists literally hundreds of yards of open railing space nearby.

In the United States, many people envision the "American Dream", which might be a large stately home on a hill set back from an expansive front lawn. Some people almost feel it is their birthright to have this home, or own a farm, a ranch, or at least a few acres of land. Furthermore, as mentioned previously, America is what is known as an individualistic society, or one which values personal liberties, as opposed to a collectivist society such as Guatemala, or one which values cooperation. Someone in that country may not feel the same intrinsic need to own a large farm, but could be content with a smaller lawn and a humbler garden on the side of a home instead.

One example of personal space would be the buffer zone a person tries to maintain so that a conversation partner does not get too close and make them feel uncomfortable. The person might maintain their personal space by taking a step back, with a hand gesture, or even by asking the other person to step back from their position.

A second similar example would be a personal space bubble created when someone is waiting in a line and another person behind them intrudes on that bubble. The person might turn and glare at the intruder.

A third instance is a personal space bubble someone creates when they are sitting or standing on public transportation. The person might move to another spot in the vehicle.

These three fictitious examples correspond to the three above personal space examples:

Jack has a crush on a smart student named Jill, and one day spots her at the vending machines in the student campus center on university grounds. While she is buying an energy bar, Jack sneaks up from the side and rests his elbow against the glass of the vending machine, and looks Jill in the eye from a distance of about one foot. In addition to coming across as a bit creepy, Jack is definitely violating Jill's personal space, not to mention startling her in the process. Jill announces she has to get to class and rushes away hurriedly.

Soren is waiting in line at the DMV to get his driver's license renewed. Every few minutes the line moves forward around the ropes, and everyone has to take a few steps forward. For some inexplicable reason, the man behind Soren insists on standing just a few inches behind, making Soren quite uncomfortable. Finally Soren turns around to confront the man, who immediately smiles and backs away. Soren decides discretion is indeed the better part of valor, and avoids making a scene.

Ava lives in the country but is visiting New York City for the first time and takes her first ever subway ride towards Midtown. On the sparsely populated car, a man experiencing homelessness sits so close to her that his knees are actually touching her knees. Ava quickly draws her knees inward and gets off at the next available stop. The man follows her up into the street. Ava is good-hearted and offers to buy him a hot dog, and the man, who is a down-on-his-luck veteran, is extremely thankful.

The term personal space refers to the actual amount of space required around a person for them to feel comfortable in a social encounter. Scientists theorize personal space bubbles are initiated in the amygdala, which is an almond-shaped portion of the brain. The word proxemics is another word used to define and study personal space. A personal space bubble is an imaginary oval-shaped region which surrounds a person and helps to protect them from stress and possible aggressive behaviors. They are constructed on cultural and societal levels. Persons in individualistic nations that value personal freedom may need more personal space than persons who live in collectivist nations which value harmony instead. The global pandemic of 2020 may forever result in persons increasing the size and scope of their personal space bubbles.

The size of personal space zones required varies between family, friends, colleagues, and strangers. A violation of a person's personal space can result in the victim avoiding eye contact, standing motionless, or crossing their arms in a defensive posture. Three factors which influence personal space are population density, territorial attitudes, as well as cultural norms and rules.

What is an example of personal space?

One example of personal space is an individual maintaining an arm's length distance when chatting with a coworker. If the other person took a step inward, this would constitute a violation of that personal space.

What is a personal space bubble?

A personal space bubble is an imaginary region around a person. This serves as a buffer against other persons coming in too close of contact.

What is personal space and why is it important?

Personal space is the physical area which surrounds a given person in which they feel comfortable. It is important because it protects human beings both from high levels of stress and possible aggressive behaviors.

The Importance of Space in Nonverbal Communication

Monochronic vs. Polychronic Communication Styles | What Are Chronemics?

The Role of Culture in Nonverbal Communication