Nicholas Amendolare, Thomas Zesiger
What is a photon? Learn about photon, photon emission and the properties of photon wavelengths, and delve into the complexities of photon energy. Updated: 09/09/2021

What is a Photon?

A photon is a tiny particle made up of electromagnetic waves. They have no mass and no charge. You can think of them as a tiny packet of light energy.

A photon is an example of a quantum, a discrete packet of energy or matter. Strangely, photons have properties of both particles and waves. They have momentum and they behave as a concentrated unit, like particles. But they have a specific frequency and wavelength, like a wave. Einstein himself was mystified by this wave-particle duality, saying, "It seems as though we must use sometimes the one theory and sometimes the other... We have two contradictory pictures of reality; separately neither of them fully explains the phenomena of light, but together they do."

The scientific definition of a photon is a particle representing a quantum of light, or other electromagnetic radiation, that carries energy proportional to its frequency. Photons make up all of the light we can see. A rainbow, for example, is reflecting red, orange, yellow, green, and blue photons, all with their own distinct color. But there are many photons that the human eye cannot see as well. Infrared photons are sometimes used to help keep our food warm, and ultraviolet photons can give us sunburns. In all cases, the photon is a discrete quantum of light vibrating at a very specific frequency.

Our modern understanding of light, including its behavior as both a particle and a wave, can be described by the equations of James Clerk Maxwell, published in 1864. The equations themselves are much too advanced to briefly discuss, but suffice it to say, they show that electric and magnetic fields obey wave equations. His equations also revealed that the speed of light was equal to 2.998x{eq}10^8 {/eq} m/s. Because the speed of light had already been measured experimentally, Maxwell's theories fit the current understanding of the behavior of light while also paving the way for the future. The detection and production of radio waves, for example, was still more than a century away.

Definition of a Photon

The concept of photons and quanta comes from quantum mechanics and quantum theory. Quantum mechanics is a mathematical model that describes the behavior of particles on an atomic and subatomic scale. It demonstrates that matter and energy are quantized, or come in small discrete bundles, on the smallest scales imaginable. A photon propagates at the speed of light. 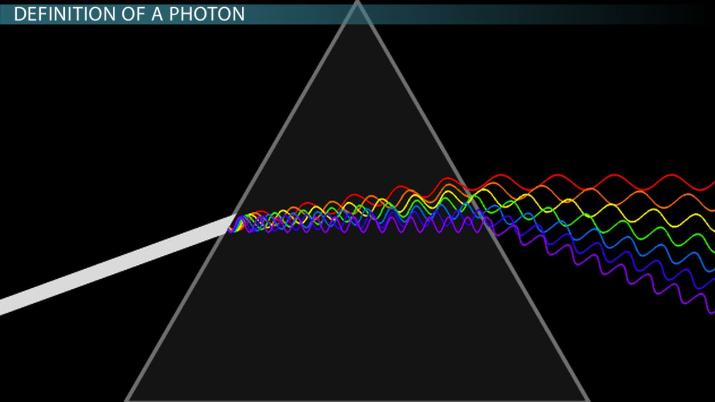 Try it now
Back
Coming up next: Matter: Physical and Chemical Properties

What is Photon Energy?

In the equation for photon energy listed above, E stands for "photon energy," h stands for Planck's constant, and f stands for "frequency." The higher a photon's frequency, the more energy that photon carries.

Visible light can be further separated into colors. The colors of the rainbow are, in fact, a ranking of the photons according to wavelength. Red has the longest wavelength and lowest frequency, followed by orange and yellow. Then comes green and blue. The photons with the shortest wavelength and highest frequency are purple. Colors are just the human brain's interpretation of the detection of various photons.

It's important to note that the concept of "visible light" is a decidedly human one. The human eye can detect only certain photons; we can't see infrared, for example. But many snakes can. And many birds can see ultraviolet light.

Photons can be emitted in a variety of ways. Because photons are simply electromagnetic waves traveling through space, the creation of that wave is always the result of the motion of charged particles. Below are a few common examples.

Scientists have been working to further our understanding of light since ancient times. Plato himself thought that light was made of rays emitted by the eyes. And when the rays struck an object, they allowed us to interpret its color, size, and shape.

In 1027, the Arab scientist Alhazen published his book of optics, which proved that light originated from light sources. He also invented the first pinhole camera and used his theories to explain why the image in the camera was upside-down.

Later, scientists like Isaac Newton and Christiaan Huygens argued about whether light was a particle or a wave. Newton was in the particle camp, while Huygens argued for the wave camp. Hundreds of years later, James Clerk Maxwell published his equations. And in 1900, Max Planck theorized that the energy of light is proportional to its frequency. His work eventually Einstein's theory that light exists in discrete quanta of energy (photons). Einstein also discovered the "photoelectric effect," which helped us understand how incoming photons can interact with, and eventually eject, electrons from a material. The higher the frequency of the light being used, the more energy the ejected electrons will have. It's how modern solar panels can turn light energy into electricity.

Our modern understanding of light is built upon the contributions of each of these scientists and many others. We now understand that light is both a wave and a particle. Or, at the very least, light is its own special thing that has the properties of both.

A photon is a tiny packet of light energy. Strangely, photons have properties of both particles and waves. They make up all of the light we can see and many kinds we cannot see as well. The equations of James Clerk Maxwell helped us understand this wave-particle duality.

The amount of energy carried by a single photon is called photon energy. It depends upon a photon's frequency or wavelength. These two quantities are related. The higher the frequency, the shorter the wavelength, and the longer the wavelength, the lower the frequency. Scientists typically divide light into seven categories based on the frequency of its photons: radio waves, microwaves, infrared light, visible light, ultraviolet light, X-rays, and gamma rays. Visible light can be further separated into the colors red, orange, yellow, green, blue, and purple based on its frequency. Photons can be generated in a variety of ways, each involving the motion of charged particles. They can be emitted via blackbody radiation (an old-fashioned light bulb), spontaneous emission (neon lights), or even radioactive decay (nuclear waste).

Definition of a Photon

The concept of photons and quanta comes from quantum mechanics and quantum theory. Quantum mechanics is a mathematical model that describes the behavior of particles on an atomic and subatomic scale. It demonstrates that matter and energy are quantized, or come in small discrete bundles, on the smallest scales imaginable. A photon propagates at the speed of light.

The energy inside photons can never be destroyed, but it can be absorbed and transformed into other types of energy (i.e. the motion of molecules).

Yes! Photons are simply discrete packets of light energy. All the light that we can see, and all the light in the universe, is made up of photons.

What is the de Broglie wavelength of a photon?

How is a photon created?

Try it now
Back
Create an account
What is a Photon? | Photon Energy & Wavelength
Start today. Try it now
Basics of Astronomy

What is a Photon? | Photon Energy & Wavelength
Related Study Materials

The Four Kinds of Trajectories for Celestial Objects

The Study of Light | What is Light?

Frequency Formula, Unit & Examples | What is the Frequency of a Wave?