Emily Fink, Heather Pier
Learn what a mollusk is. Read about the phylum Mollusca and see mollusk examples. Understand types and characteristics of mollusks, classes, and symmetry. Updated: 03/15/2022

What Is a Mollusk?

A mollusk generally refers to a member of the large group of soft-bodied invertebrates within the phylum Mollusca. Examples of mollusks include snails, clams, oysters, squids, and mussels. This group of organisms varies greatly in habitats and appearance, but they have a few universal features that will be elaborated on later in this lesson. 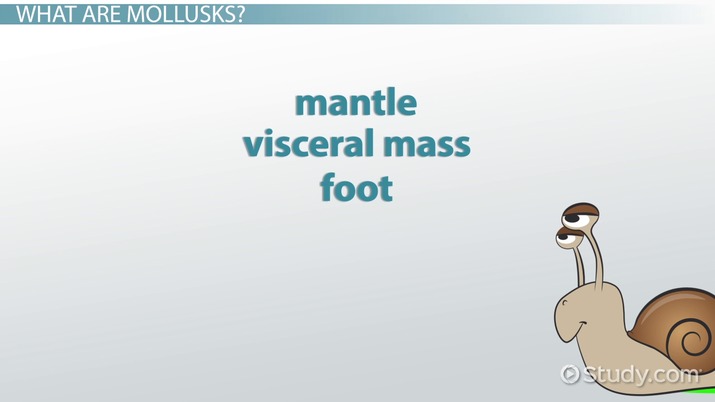 Try it now
Back
Coming up next: Which Mollusks Have Shells?

Taxonomy is defined as the scientific method of classifying biological organisms. It uses a hierarchal system, akin to a reverse pyramid, of eight major levels, from the most general to the most specific. The levels from largest to smallest are domain, kingdom, phylum, class, order, family, genus, and species. Humans, for example, have the following taxonomic classification: domain (Eukarya), kingdom (Animalia), phylum (Chordata), class (Mammalia), order (Primates), family (Hominidae), genus (homo), and species (sapiens). We diverge from mollusks at the phylum level, which is pretty high up on the scale of taxonomy, underscoring the vast complexity and varieties of the phylum Mollusca.

The phylum Mollusca is the second largest phylum of invertebrate animals, with Arthropoda (containing insects) being the largest. The estimated number of species of mollusks alive today is estimated at around 200,000 on land and sea, with the fossil record indicating an additional 60,000–100,000 different species. In the sea, mollusks are the largest marine phylum, about 23% of all known marine organisms. Mollusks can inhabit fresh water as well as dry land, but most mollusk species live in the oceans.

Class fits into taxonomy directly below phylum. The phylum Mollusca is divided into roughly nine different classes, although opinions vary on the exact number of classes.

The classes of Mollusca are briefly described in the table below.

Mollusks are found in different environments all over the world, including freshwater, saltwater, and on land. Mollusks are found throughout the ocean, from shallow, rocky tidal areas to the very deep sea. They can also be found at various terrestrial climates and altitudes. Commonly recognized mollusks in the Gastropoda class are snails and slugs. Even within the sub-categories of Gastropoda, there are different species.

Within the Bivalvia class are marine and freshwater mollusks, such as clams, oysters, cockles, mussels, and scallops. They are defined as lacking a radula and possessing a shell composed of calcium carbonate enclosing a compressed body.

Within the Polyplacophora class are marine animals known as chitons. They have also been called sea cradles or coat-of-mail shells. Their unique shells are composed of eight different plates, providing them protection and flexibility.

The cephalopods are a class of mollusks containing marine mollusks characterized by bilateral body symmetry, a prominent head, and tentacles. Examples of cephalopods include squid, octopus, cuttlefish, and nautilus.

The Scaphopoda are also referred to as tusk shells or tooth shells. They are found in oceans all over the world and can range from 0.5 to 18 cm long.

The Aplacophora are small, cylindrical, and wormlike marine mollusks with no shell and little resemblance to the other types of mollusks. They are found all over the world and inhabit the deep, benthic regions of the oceans.

The Monoplacophora also live at the bottom of the deep sea. They have one dome-like shell.

There are common characteristics shared among all mollusks, including soft bodies, a mantle, a visceral mass, and the foot. Not all mollusks possess a true brain. The mantle of a mollusk is a thin tissue layer covering the outside of the mollusk. In mollusks that possess shells, such as snails, the mantle is responsible for secreting, repairing, and maintaining the shell. The visceral mass, which is also called a visceral hump, is the portion of the mollusk that contains most of the digestive, respiratory, and reproductive systems. The mantle partially surrounds the visceral mass. Using the example of a snail, the visceral mass is found inside its shell. The foot of the mollusk is a muscular organ used for movement. In shelled mollusks, such as the snail, the foot is the portion of the snail at the bottom that is used for crawling across surfaces.

The types of mollusks vary and are defined according to physical appearance. Shells vary in size, color, and shape, such as simple or coiled. Other differences are the types of sensory appendages, such as tentacles. Terrestrial gastropods, like land snails, have two sets of tentacles on the head, and when they are extended, the upper pair of tentacles has eyes on the tips. These tentacles are not used for movement or to capture prey, unlike the tentacles of other mollusks, such as squid. The tentacles of the giant squid have powerful suckers and can have teeth at the ends.

The general anatomy of a mollusk varies from species to species, but it can be best explained when broken down into the compartmental constituents, such as the circulatory system, the nervous system, and the digestive system.

The heart-like muscle contains at least one pair of atria, or chambers, which receives the oxygenated hemolymph from the gills. The gill filaments are the portion of the circulatory system responsible for gas exchange. The atria pump the hemolymph to the ventricles, which then pump it to the aorta. Hemocyanin is the blood pigment found in mollusks, similar to human hemoglobin. Their blood is colorless when deoxygenated, and blue when oxygenated.

The general mollusk nervous system is composed of a pair of nerve cords (three in bivalves). The masses of nerve cell bodies, referred to as ganglia, are the most common and important part of the mollusk's nervous system. The nerve chords are organized around the ganglia. These ganglia innervate the sensory organs, head, and mouth. All mollusks possess ganglia, whereas not all mollusks have a true brain.

Cephalopods often have a complex nervous system and sophisticated brains, and in some species, such as octopi, this explains their intelligent behavior. An octopus's brain has a highly developed tactile learning and memory component. The squid's nervous system has a giant fiber system that enables it to rapidly escape threats. The nautilus has a brain with an olfactory system.

The mollusk's digestive system is composed of a mouth, radula, odontophore, stomach, and anus. The mouth and the radula are the first part of the mollusk's digestive system. The radula, with its associated teeth, are responsible for scraping food off surfaces and into the mollusk's mouth. The odontophore is the cartilage that supports the radula. The mouth contains glands that secrete mucus to help food stick. The mucus then travels to the stomach through the beating motion of hair-like structures known as cilia. The cilia also secrete feces at the rear of the stomach and help push it out of the anus.

A mollusk generally refers to a member of the group of soft-bodied invertebrates within the phylum Mollusca. Examples of mollusks include snails, clams, oysters, squids, and mussels. This group of organisms varies in appearance, as well as habitats; however, they have a few universal features, including a mantle, a radula, a nervous system, and bilateral symmetry. In taxonomy, the scientific method of classifying biological organisms, the phylum Mollusca can be broken down into several classes, which is the categorical term used to describe the division directly under phylum. The mollusk's anatomy consists of a circulatory system, a nervous system, and a digestive system, which vary between the various classes. Mollusks can have shells and/ or tentacles. There is much morphological variation among the phylum Mollusca, which isn't a surprise since they inhabit both terrestrial and marine environments. There are estimated to be around 200,000 mollusks alive today, on land and sea, with the fossil record indicating an additional 60,000–100,000 different extinct species. This makes the phylum Mollusca the second largest phylum of invertebrate animals, with Arthropoda (containing insects) being the largest.

What are classes of phylum Mollusca?

Class is a taxonomic designation directly below phylum. The mollusk classes that are still alive today include Gastropoda, Bivalvia, Polyplacophora, Cephalopoda, Scaphopoda, Aplacophora, and Monoplacophora.

What are three examples of members of the phylum Mollusca?

There are estimated to be around 200,000 living species of mollusks, making it the second-largest phylum of invertebrates. Some examples include clams, snails, and octopi.