Europe is known for being one of the smallest of the seven continents, but in reality, it is a subcontinent. A subcontinent is a large piece of a continent that is distinguishable on its own. In this case, Europe is a peninsula that juts westward from the Eurasian landmass. The European subcontinent meets Asia at the Ural Mountains to the east; the Mediterranean, Adriatic, and Aegean Sea to the south; the Atlantic to the west, including Iceland to the northwest; and the North and Norwegian Sea, and Arctic Ocean to the north.

There are many ways to characterize and describe Europe. First is political Europe, which is related to the voluntary regional governing body of the European Union and close regional trading partners. The European Union was established to increase unity in the region after the World Wars of the twentieth century and make economic mobility and the physical movement of citizens of the region easier. Turkey, to the southeast of the subcontinent, shares a border with the European country of Bulgaria, the Black Sea, the Aegean Sea, and the Mediterranean. Often seen as a bridge between Europe and the Middle East, Turkey has applied to be part of the European Union and culturally identifies with both regions. This makes Turkey part of political Europe. Geographical Europe extends to include the island country of Iceland to the northwest and western Russia to the Ural Mountains. Russia is the largest country in the world and uniquely spans both Europe and Asia. The divide between Europe and Asia is the crest of the Ural Mountains, often considered to divide European Russia and Asian Russia. For the purposes of this lesson, both political and geographic Europe will be included.

This lesson explores the physical and human geographical features of greater Europe. The physical characteristics of an area are a description of the landforms in that area. Landforms are any natural features of the Earths surface, such as mountains, valleys, canyons, lakes, rivers, coasts, and seas. Human characteristics are the features created or caused by humans, including country borders, cities, towns, dams, and roads. 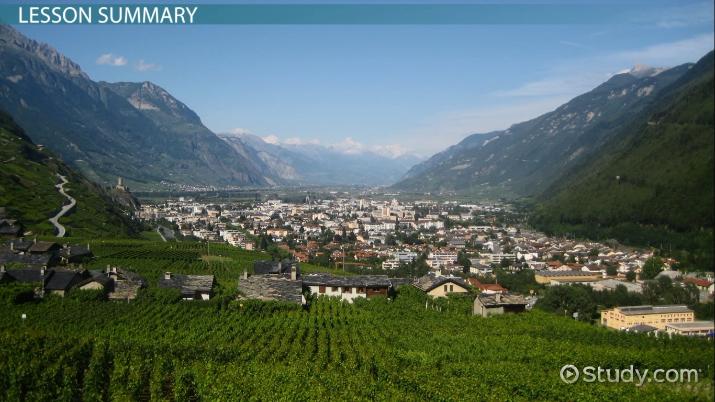 Coming up next: Major Landforms in Europe's Different Regions

Europe is a complex geographic region when examining its human and physical characteristics. The largest city in Europe is Istanbul, Turkey, with approximately 14 million inhabitants, followed by Moscow, Russia with 12 million people, and London, United Kingdom with about 8.5 million people. Other cities of significant size are St. Petersburg, Russia; Berlin, Germany; Madrid, Spain; Rome, Italy; Kiev, Ukraine; and Paris, France. Given that Europe is one big peninsula, there are numerous miles of coastline, as well as a number of major rivers. With this geography available, many European cities were built on rivers and coastline. The Thames River in London, the Seine in Paris, the Havel and the Spree in Berlin, St. Petersburg (Russia) on the Gulf of Finland, and Istanbul located between the Sea of Marmara and the Black Sea. Water access provides coastal plains, which are usually fertile for agriculture, the option to be used for transportation of goods, people, and ideas.

The subcontinent of Europe is physically diverse with mountains, rivers, valleys, and lakes, especially considering its smaller size. The largest mountain range is the Alps, which are located in France, Italy, Switzerland, and Germany. The tallest mountains in Europe are Mount Elbrus in Russia at 18,510 feet, Mount Ararat in Turkey at 16,854 feet, followed closely by Mont Blanc in the Alps at 15,781. Well known European valleys are the Loire and Rhone valleys in France and the Danube river valleys in Germany, Austria, Slovakia, and Hungary. The Danube is the longest river in Europe. In addition to the previous mention of the Thames, Seine, Havel, and Spree rivers, other sizable rivers in Europe are the Elbe in the Czech Republic and Germany, the Loire in France, and the Rhine, which moves through nine countries in western Europe. The two largest lakes are Lake Ladoga in Russia and Vanern Lake in Sweden.

Europe can be regionalized beyond its political and geographic boundaries. For more specific discussion of its geographic features, Europe can be broken into the regions of Western Europe and Eastern Europe. Using a very literal half-and-half division of the European subcontinent, including European Russia and Turkey. Starting in the north, the dividing line is drawn at the borders of Sweden and Finland, Germany and Poland, Czechia and Slovakia, Austria and Hungary, Slovenia and Croatia, ending at the Adriatic Sea. Making potential regionalization even broader is the confusion over the three countries of Georgia, Armenia, and Azerbaijan, which border European Russia to the north and Turkey to the west. This unique location on the periphery of political Europe and geographic Europe makes some ask if it should be considered part of Europe or Asia.

Western Europe consists of the countries of Norway, Sweden, Iceland, Ireland, the United Kingdom, Denmark, Germany, the Netherlands, Belgium, France, Spain, Portugal, Andorra, Monaco, Luxembourg, Switzerland, Austria, Italy, and Slovenia. Major landforms of Western Europe are the Thames, Seine, Havel, Spree, and Rhine Rivers; the Scandinavian and Iberian Peninsulas; the English Channel, the North Sea, and the Mediterranean Sea; the start of the Northern European Plain; and the Alps and Pyrenees mountains. The cities of Amsterdam, the Netherlands, Dusseldorf and Cologne, Germany, Gibraltar, Spain, and Lisbon, Portugal are examined for their physical and human characteristics.

Europe is a subcontinent within the greater Eurasian continent. It starts at the Atlantic Ocean in the west, the Arctic Ocean to the north, the Ural Mountains to the east, and the Mediterranean Sea to the south. There are many ways to regionalize Europe, including political Europe, which includes the country of Turkey; geographical Europe, which encompasses the western part of Russia; and Western and Eastern Europe, which often divides the subcontinent directly in half. Europe has been studied for its physical characteristics and landforms, descriptions of the region, such as the Danube as the longest river, or that the Pyrennees mountains separate France and Spain. The other way to regionalize Europe is through its human features, which is the geography caused by humans, such as Istanbul as its largest city or the fact that access to waterways provide beneficial access to water, good soil, and transport for trade.

What are 10 physical features of Europe?

Ten major physical features of Europe are the Daunbe and Rhine rivers, the Ural and the Pyrenees mountains, the Alps, the Mediterranean Sea, the English Channel, the northern European Plain, and the Iberian and Scandinavian peninsulas.

Where are the major physical features of Europe located?

The major physical features of Europe are distributed throughout the subcontinent. The Danube and Rhine rivers run centrally. The Ural mountains separate European and Asian Russia. The Pyrenees create the border between France and Spain and the Alps run through many south central countries. The Mediterranean Sea creates the southern border of Europe. The English Channel separates the United Kingdom from France. The northern European Plain runs from Germany east to Russia. The Iberian Peninsula contains the countries of Portugal and Spain. The Scandinavian Peninsula consists of the countries of Norway and Sweden.

Economic Opportunities for Minorities & Women in Africa & the Middle East

Impact of Resources on the Movement of Products, Capital & People in Europe

Europe Climate Zones & Classifications | What Is the Climate In Europe?

Mapping the Physical & Human Characteristics of Australia & the Pacific Islands