In science, a property is often used to describe the different characteristics of a substance. These various qualities may refer to the state of matter, mass, density, oxidation, conductivity, colour, bonding, etc. It is important to recognize the unique properties each substance holds, as it helps to better understand how the substance behaves in different situations. It should be noted that there are two kinds of properties in science: chemical and physical.

Physical properties are traits of a substance which can be measured or observed without changing the identity of a substance. When a substance undergoes a physical change, it is usually reversible. For example the substance of water can be physically changed into ice by freezing the water molecules, or into water vapour, by boiling the water molecules. When water is frozen or heated up, the identity of water itself does not change, only the physical properties change.

Listed below are some examples of both intensive and extensive properties: 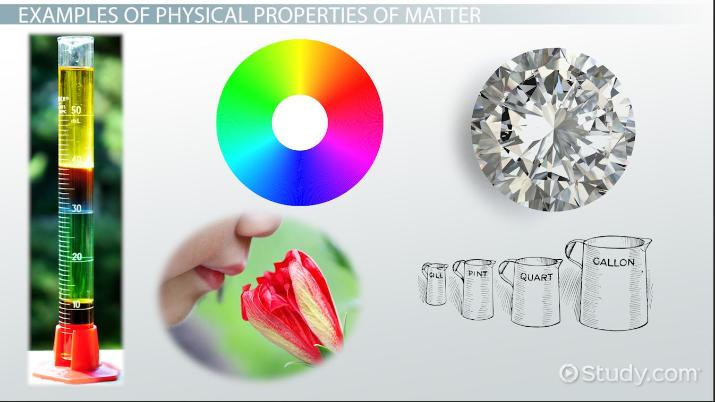 Try it now
Back
Coming up next: Water Phase Changes: Physics Lab

Some examples of physical properties include:

In comparison, there are also chemical properties, where the substance has potential to undergo a chemical change or chemical reaction through it's composition.

Is Density Intensive or Extensive?

In chemistry, density can be defined by the mass of a unit volume of a material substance. Density can be expressed by variable {eq}d {/eq} and can estimated using the following formula: {eq}d = M / V {/eq}. Where {eq}d {/eq} is density, where {eq}M {/eq} is mass, and where {eq}V {/eq} is volume. Density is generally expressed in units of grams per cubic centimetre, although density can also be expressed in units of kilograms per cubic metre. Density is classified as an intensive property. Even though both mass and volume are extensive properties, density is a ratio of these two properties, and the ratio does not change. Therefore density is categorized as an intensive property.

Referring back to the water example, the density of water may change according to it's state of matter and associated properties. For example:

Is Odour a Physical or Chemical Property?

Odour can be defined as a distinctive smell, sometimes an unpleasant one. Odour is classified as a physical property of matters as it is an observable trait which won't change the identity of a substance. In addition, odour is known to be an intensive property because it does not depend on the quantity of matter. Natural odours may be described as earthy, musty, sour, or even fishy, grassy or herbaceous. Whereas industrial odours often smell like iodine, petroleum, varnish, alcohol or even medicine. Some well-known examples of odours are as follows:

Is Colour a Physical Property?

Colour is another example of a physical property, as it can be determined without changing the composition of a substance. More specifically, colour is another intensive property. Here are some examples of the colour of some naturally occurring matters:

Hardness is another example of a physical property, in particular, it is categorized as an intensive property. Hardness of matter can be defined by the ability in which a material has to resist fracture, deformation or permanent indentation, when a load is applied. Hardness can be expressed in Pascal units, also written as {eq}N/mm^2 {/eq}. Hardness is dependent on ductility, elasticity, stiffness, plasticity, strain, strength, toughness, viscoelasticity and viscosity, and the property itself can be tested through various methods such as indentation tests. Outlined below are examples of hardness of some matters:

Length is another example of a physical property, more specifically an extensive property. The unit of length refers to any arbitrarily chosen and accepted reference standard for measurement. Length can be expressed in various units of measurement, but is most commonly measured by metric units. For example in millimetres (mm), centimetres (cm), metres (m), kilometres (km), etc. Length can also be measured via imperial units which include inches, feet, yards and miles. Length as a physical property refers to the longest dimension of an object. Some examples of the length of some matters are listed below:

1 mm = the thickness of a staple

1 cm = the width of a little finger

Melting point is another physical property, in fact it is classified as an intensive property. Melting point can be defined by the temperature at which a given solid will melt. To elaborate, when the melting point of a substance has been reached, the solid and liquid phase exist in equilibrium. In addition, the melting point of substances depend upon pressure, and can vary depending upon the substance. The units of melting points is expressed through various units, most commonly including Kelvin {eq}[K] {/eq}, degrees Celsius, degrees Fahrenheit, or even degrees Netwon.

Listed below are some examples of the various melting points for different matters:

Volume is another physical property, in particular, an extensive property. Volume can be defined as a quantity that expresses the amount of 3D space enclosed by a closed surface. A unit of volume is used to measure the capacity of the object or space occupied and can be measured in cubic units, for example; {eq}cm^3 {/eq} when referring to a solid, or metric units when referring to a liquid, for example; millilitres (mL), centilitres (cL), decilitres (dL), or even litres (L). Here are some examples of volumes of some matters:

Properties of a substance are used to describe its different characteristics and can be classified as either physical or chemical. Physical properties can be observed without the substance identity being altered., therefore the physical change is reversible. Some examples of physical properties include colour, hardness, conductivity, density, etc.

Physical Properties of a Useful Metal

Copper is a useful metal. It is used in jewelry and in architecture because of its reddish-brown color and other properties both physical and chemical. It is used in plumbing and in electrical wiring. Remember from the lesson that the units of density are often given in g/mL. You may also see density expressed in g/cc. The abbreviation cc stands for cubic centimeter and 1 mL = 1 cc.

Copper has a density of 8.92 g/mL, which is less dense than lead at 11.34 g/mL, but denser than aluminum at 2.7 g/mL. It melts at 1085 degree Celsius. The electrical conductivity of copper at 59,000,000 Siemens/m is the second highest after silver. Its thermal conductivity is also high at 401 Watt per meter per degree Celsius, which is much higher than the thermal conductivity of either iron or aluminum. This is why a lot of cookware is made of copper or has copper cladding on the bottom. Another property that makes copper useful is its ductility, which is its ability to be drawn into a wire.

The composition of the copper must be very pure, over 99.99% copper to allow an ingot of copper to be first drawing into copper rod and then reduced to thin wires or tubes that don't break when pushed through a die. The strength of copper is high in both compression and tension. Copper will corrode when used for plumbing, but much slower than iron.

1. Use in cookware at high temperature

What is a physical property?

What are examples of physical properties?

Classifying Substances by Their Physical Properties

Solubility Overview & Properties | What is Solubility?