Piaget worked for the Binet Institute and became interested in cognitive development through his work of assessing French children's IQ's. He became more interested in the wrong answers on the tests than the correct answers. He became curious about when the major concepts, such as numbers, time, quantity, casualty, justice, and other fundamental thoughts began to emerge in children. In the 1950s, he determined that children pass through four developmental stages of cognitive development. 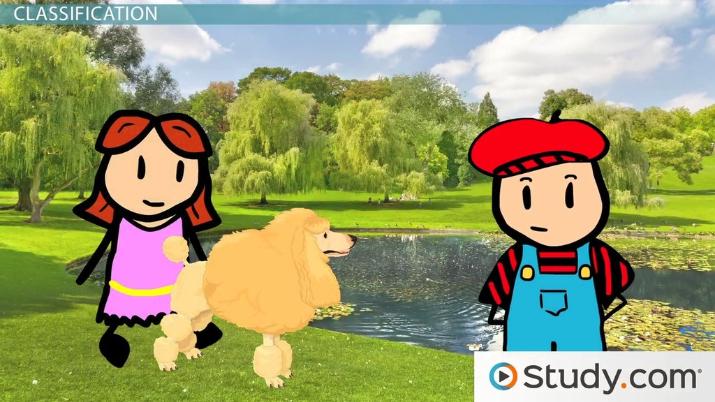 Coming up next: Understanding Change in Middle Childhood: Reversibility & Reciprocity

Classification is a child's ability to classify objects based on size, color, shape, etc. Children in this stage can identify the properties that make the items the same or different. They use this categorical information to solve problems. The main ability of classification is the ability to group objects based on a quality they share. Children can also identify subgroups within the main group of items.

Piaget developed a test to determine if a child had mastered the classification stage of concrete operational development. He used a group of white and brown wooden beads and showed them to a child. The child was asked, "Are there more white beads or brown beads?" If a child could not give the correct answer, Piaget determined they were still in the preoperational stage of development.

Another psychologist, James McGarrigle, developed a slightly different version to this test to prove his theory that children can in fact show centration, a child's ability to deal with one classification at a time, earlier than Piaget theorized. In McGarrigle's experiment, he showed a child a group of black and white cow cutouts. He laid the cutouts on their side like they were sleeping. He then asked the child two questions about the cows. The first question, "Are there more white cows or black cows?" This was the same question that Piaget asked and children were correct only 25 percent of the time. McGarrigle then went on to ask a second question. He asked, "Are there more black cows or sleeping cows?" to which children answered correctly 48 percent of the time.

McGarrigle determined from the results of his test that children are able to show centration earlier than Piaget had determined, and that the children in Piaget's study were not asked the question correctly.

To test the cognitive development of a child's conservation level, Piaget would show a child two rows of checkers. He first would show the two rows evenly spaced and ask which row had more. He then spaced one row of checkers out more than the other, and asked the question again. He determined that children who answered the second question incorrectly were in the preoperational stage, and children that answered that question correctly were determined to be in the concrete operational stage.

In 1974 psychologists Rose and Blank challenged Piaget's determinations, stating that asking a child the same question twice made the child assume the first answer was incorrect, so they would change the answer for the second time the question was asked. Rose and Blank conducted the same experiment but only asked a child the question once. They poured liquid from one container to a different size container and asked, "Which has more?" They determined more children were able to answer correctly and at an earlier age than Piaget had concluded in his testing.

Seriation is the logical ordering of items by spatial awareness in quantity or magnitude. To test if a child had developed seriation, Piaget tasked a child with ordering a set of sticks from smallest to largest. If a child was able to correctly order the sticks, Piaget determined they had reached the concrete operational level of development.

In 1966 a psychologist, Greenfield, argued that Piaget's results were false and that a child's level of seriation was based on prior schooling and education level, and was not considered part of a developmental stage.

Transitivity is the ability to comprehend how different objects are related to one another. This theory concludes that a child can reason that if a car is a vehicle and a Toyota is a car, then a Toyota is a vehicle. Piaget tested this level of cognitive development by asking a child a series of questions, then determining if they could compare items to one benchmark item.

The Four Stages of Piaget's Cognitive Development Theory are:

The third stage, concrete operational, is thought to be the most crucial to a child's cognitive development. According to Piaget, it is during this stage that a child begins to have a logical thinking process. The concrete operational stage is ages seven to twelve, however other psychologists have theorized Piaget's age classifications are too narrow.

Within the concrete operational stage are four subcategories of development.

What are the characteristics of the concrete operational stage?

Health and Fitness in Middle Childhood

What are Piaget's Stages of Cognitive Development?