What is a Polynucleotide?

Pyrimidine: Cytosine (C), thymine (T), and uracil (U) are examples of pyrimidines because they all are derived from a six-membered pyrimidine ring.

A nucleotide molecule without the phosphate group is termed a nucleoside and several nucleotides are linked sequentially to form a polynucleotide.

Nucleotides are phosphoric acid esters of nucleosides or nucleoside phosphate. Thus, the nucleotide consists of a pentose sugar attached to a phosphate group at its 5' carbon and attached to a nitrogen base (either A or G or C or T or U) through 1' carbon (C-1). Purines (A, G) attach to C-1 of sugar through their 9' nitrogen (N-9) whereas, for pyrimidine (C, T, U), attachment is via 1' nitrogen (N-1) to C-1 of sugar. The nucleotide can have one, two, or three phosphate groups designated as \alpha, \beta, and \gamma for the first, second, and third phosphate from 5' carbon of sugar respectively. 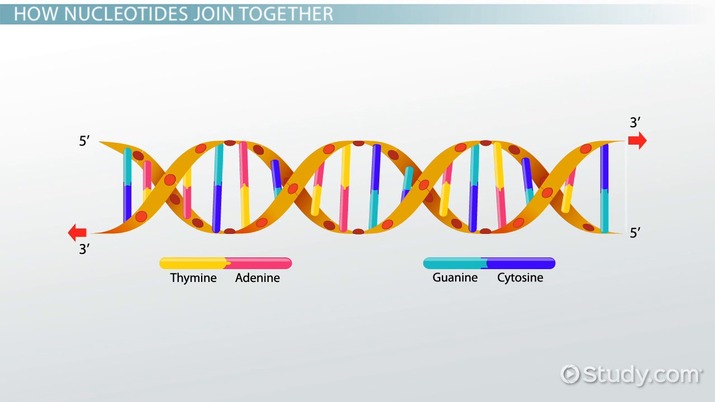 Try it now
Back
Coming up next: What Is DNA Replication? - Conservative, Semi-Conservative & Dispersive Models

How are Nucleotides Linked Together to Form a Polynucleotide Chain?

As discussed above, the nucleotides are linked through a phosphodiester bond in a polynucleotide. The way in which the several nucleotide subunits are linked together in a polynucleotide is that it forms a chain-like structure. Interestingly, this chain of nucleotides gives DNA a chemical polarity or direction. In a DNA chain, all of the 3' and 5' groups of pentose sugar are involved in phosphodiester bonds except for the first and last nucleotide in the chain. The first nucleotide of the chain has an intact 5' phosphate group i.e. it is not bound to any other nucleotide and the last nucleotide has a free 3' hydroxyl group. Each DNA chain has polarity referred to as 5'end (where 5' carbon at one end of the molecule has a phosphate group) and 3'end (where 3' carbon at the other end of the molecule has a hydroxyl group). Thus, the nucleotides linked together in a polynucleotide chain give 3' and 5' ends.

The DNA molecule contains two polynucleotide chains wrapped together. The two polynucleotide strands of DNA are oriented in an antiparallel fashion. Phosphodiester bond which joins 5'carbon of one nucleotide to the 3'carbon of the adjacent nucleotide is oriented in opposite directions in two DNA strands. It means the 3'-OH terminus (3'end) of one strand is adjacent to the 5'-phosphate terminus (5'end) of the other. So, one strand runs in a 5' to 3' direction, and conversely, the other strand runs in a 3' to 5' direction.

In a cell, the polymerase enzyme performs the linking of nucleotides together to form a polynucleotide chain. Polymerase catalyzes the covalent phosphodiester bonds between sugar and phosphate. The reaction catalyzed by polymerases is known as polymerization reaction. In a polymerization reaction, the new incoming nucleotide attacks the 3'-OH group of sugar in the previous nucleotide via its 5' phosphate group. Such a reaction by the polymerase forms the phosphodiester bond between sugar and phosphate thus growing the polynucleotide chain in a 5' to 3' direction.

DNA and RNA are the two types of polynucleotide chains found in nature. DNA and RNA differ from each other in both structural and functional aspects. A DNA molecule is made up of two polynucleotide chains known as two strands coiled around each other. Thus, DNA has a double-stranded helical structure. Major features of DNA structure are listed below:

RNA on the contrary consists of a single polynucleotide chain and thus, has a single-stranded structure. RNA forms hairpins and loop structures. RNA utilizes uracil (U) as one of the pyrimidine bases instead of thymine (T). DNA and RNA have their respective polymerases namely DNA polymerase and RNA polymerase.

Functions of a Polynucleotide Chain

Comparative detail of DNA and RNA is represented below:

Deoxyribose sugar (found only in DNA)

Ribose sugar (found only in RNA)

A combination of the above three components yield the following molecules:

DNA and RNA are two types of polynucleotide chains found in nature. Both differ in structural and functional aspects. DNA has double strands, antiparallel, and helical structure while RNA is single-stranded and possesses hairpin and loop structure. DNA is the genetic material that stores all the genetic information and instructions required by the cell. RNA is involved in the process of protein synthesis in the cell.

Apart from the cellular synthesis of polynucleotide chains by polymerases in the cell, it is possible to synthesize these chains outside the cell as well. A polymerase chain reaction (PCR) is used to copy and amplify a small amount of DNA or RNA. For PCR five components are required including, a template polynucleotide chain, DNA polymerase, primer, nucleotides mixture, and reaction buffer.

What is a DNA polynucleotide?

What is a polynucleotide chain?

A polynucleotide is a polymer composed of several nucleotides linked together. DNA and RNA are two types of polynucleotide molecules found in the cell. A polynucleotide chain has a sugar-phosphate backbone with nitrogen bases attached to every sugar molecule.

What is the difference between a nucleotide and polynucleotide?

Cellulose vs. Glycogen Differences & Uses | What are Cellulose & Glycogen?

Cellulose vs. Glycogen Differences & Uses | What are Cellulose & Glycogen?