Nicole Teeter, Trista Robichaud
Learn what is meant by polyploidy and discover the different types of polyploidy. See the significance of ploidy and the relevance of polyploidy in plants. Updated: 01/26/2022

Polyploidy is a heritable condition where an organism contains more than two complete sets of chromosomes. Polyploidy arises as a result of nondisjunction in human cells. Nondisjunction happens when members of a pair of homologous chromosomes fail to separate during meiosis. In humans, this condition is lethal. Certain organisms including angiosperm plants, some salamanders, frogs and leeches are polyploid. Due to the high frequency of polyploids in these species, these organisms are well adapted for their environment and have unique advantages.

What Does Ploidy Mean?

All organisms classified as autopolyploid have identical genomes. These organisms are derived from a single parent species usually through self fertilization. Autopolyploids contain more than two complete copies of the genome. In agriculture, both watermelons and bananas are triploid (3n) and produce sterile seeds.

Polyploidy in Plants and Animals

Polyploidy is much more common in plants than animals. Angiosperm plants are commonly polyploid, which has been a driving force of speciation in this species. Plants are more commonly polyploidy because they lack separate sexes and have the ability to self-pollinate. Wheat and bananas are two common foods humans consume that are polyploid. Crops that humans consume are often induced to be polyploid through genetic modification, making them larger than they are naturally. It is much rarer in animals because it is consequential to have extra allele copies for every gene. Most commonly in animals are invertebrates such as leeches, flatworms, and brine shrimp. Each of these organisms contain extra sets of chromosomes. Polyploidy in animals is seen more commonly in fish and amphibians. 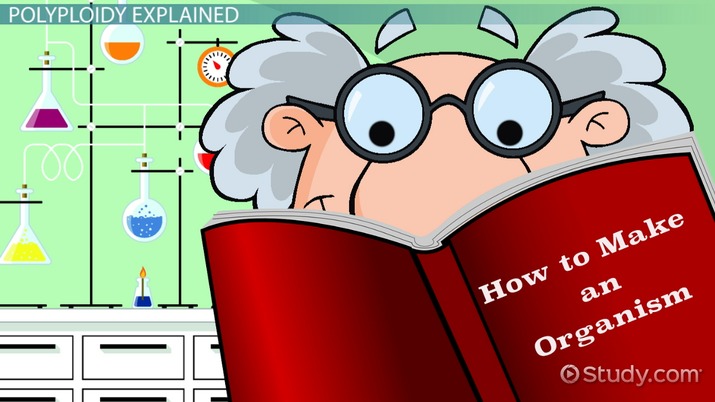 In humans, polyploidy is a lethal event. Polyploidy results from nondisjunction, in which homologous chromosomes fail to separate properly during meiosis. This genetic mutation results in the human offspring containing extra sets of chromosomes. The vast majority of polyploidy (typically triploidy due to the sperm) pregnancies end in miscarriage. While this condition is lethal in humans offspring, some human cells are actually polyploidy. For instance, the specialized tissues of both the liver and placenta are polyploid. These cells acquire more than two sets and can increase the size of the organism.

While common in plants, this condition is lethal in humans. Certain organisms like angiosperm plants, some salamanders, frogs and leeches are polyploid. Plants are more commonly polyploidy because they lack separate sexes and have the ability to self-pollinate. In humans, polyploidy is a lethal event. However, certain specialized tissues in the liver and placenta are polyploid. The vast majority of polyploidy pregnancies end in miscarriage.

The term polyploidy is a general term for a chromosomal alteration in which an organism has two or more complete sets. Polyploidy results from nondisjunction, when chromosomes fail to separate during meiosis.

What is aneuploidy and polyploidy?

What is polyploidy and how does it affect plants?

Polyploidy, a condition in which organisms are born with extra sets of chromosomes, is fairly common in the plant kingdom. Roughly 50% of all angiosperms are polyploidy. This condition is considered to be a driving force in evolution giving these plants an advantage.

Nucleosome Structure & Formation | What is a Nucleosome?