What Is Population Ecology?

Another population ecology example is the study of forests and the harvesting of trees. Population models can drive decisions as to what are reasonable harvesting rates and strategies. When used effectively, population ecology studies can help find an effective yield. Additionally, determining the minimum viable population can help keep a species of tree or a forest from being eliminated.

A third example is the study of amphibian species. It is estimated that over a quarter of amphibian species are under threat of extinction. Population ecology can measure the fluctuations of a population size and determine if it is growing, shrinking, or staying the same. Additionally, population ecology studies can help understand why this is the case. Population models can predict and quantify the likelihood of species survival and breeding. 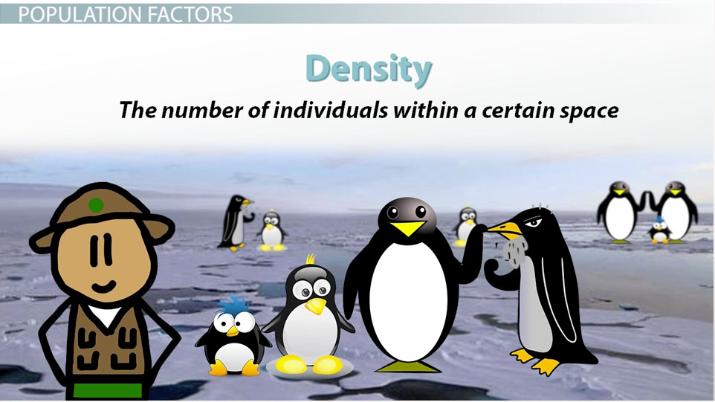 Try it now
Back
Coming up next: What Are Producers and Consumers in Biology? - Definition & Examples

An ecosystem is the assembly of various species living in a community within an environment. Studies of population ecosystems include the ways the species within an ecosystem grow, change, and interact and the reasons why this is so. Species can interact through preying on one another, competition over resources, and disease spread, among other factors. The defining characteristics of a population include the distribution, abundance, density, age structure, and sex structure.

An estimate of abundance is acquired through sampling a portion of the population that's being studied. This strategy assumes that the sample is indicative of the entire region.

The density of a population is the quantification of population size in relation to a unit of area. It is calculated by dividing the population number by the size of the land mass. A population's density can be affected by natural or man-made factors. Observing and monitoring density can give insight into factors that affect populations, like threats. Density of animal populations can inform the construction of protected land areas and formation of corridor areas.

The sex ratio of a population describes the number of males per number of females in a population. The sex ratio can give information regarding various factors that affect the births and mortality of a specific sex. A preference for sons, for instance, has been shown in some countries for various reasons. The sex ratio can indicate the impact of such preferences. Another example is the elevated propensity for males to participate in risky behaviors. Sex ratios may indicate the affect of such behavior on mortality risk.

Growth of populations over time commonly results in the spreading of population members across locations and over time. Immigration is the process of permanently coming into a new location to live, while emigration is the process of exiting or leaving an individual's original home for another. Emigration ecology includes the departure of a habitat or residence with the plan of living in another habitat or residence.

Under real-world conditions, a population cannot double after each generation. Birth and death rates generally fluctuate depending on the availability of finite resources. Ultimately, population growth is restricted by quantity of resources available to the individuals.

The carrying capacity, denoted as K in its formula, is reached at the upper limit that the environment can provide for or carry. The logistic growth model produces an S-shaped curve when population growth is graphed over time.

What is a population ecology example?

One example of population ecology is the study of apes in the wild. Studies of their birth, death, distribution, density, abundance, and age structure can give a lot of insight into their wellbeing and the best ways to allocate resources for their benefit.

What is the meaning of population ecology?

What are three characteristics of population ecology?