Post-Impressionism art saw its birth in France at the end of the 19th century when french art began to experience a growth spurt. In the 1870s, a group of artists created the art form known as Impressionism because they wanted to represent the natural world with short brushstrokes. The Impressionist movement had just begun when artists around Europe started deviating from this technique. Post-Impressionist artists did not consider themselves a school of any kind and, in some cases, openly detested the art of their peers.

The Post-Impressionism time period was clouded by invention, leading many like-minded artists to seek a new form of expression through painting. Though the painters who created Post-Impressionism have never been a collective group, the art form has been perfected and treated as an established school of art for over one hundred years.

Roger Fry coined the term 'post-impressionism' in his 1910 exhibit at London's Grafton galleries. He famously exhibited works from the artists who challenged commonly accepted art techniques and named the exhibit Manet and the Post-Impressionists. The term stuck and is still used today to describe the art created by those who wanted to add personal expression to the naturalism of Impressionism. 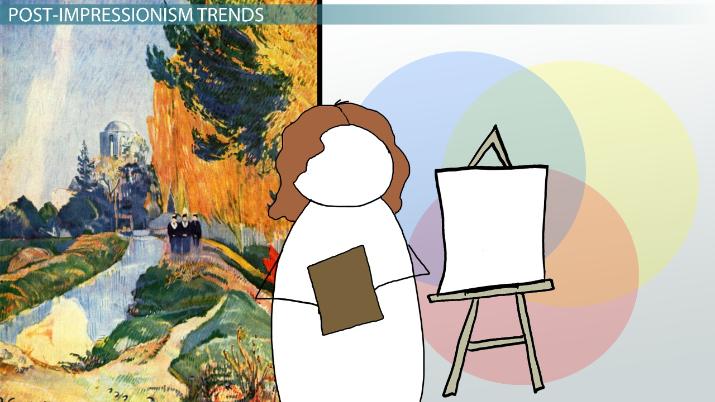 Coming up next: Prominent Artists & Works of the 20th Century

Symbolism is an important feature in many Post-Impressionist works. Many painters of the movement used the real-life subjects of their paintings as symbols for grander ideas. For example, a Post-Impressionist may paint the image of a half-eaten apple she sees on the street as a symbol for food waste in the world.

Pointillism is a technique that sprung from the mind of Georges Seurat, who also ushered in the school of Neo-Impressionism. Seurat's technique uses tiny dots of paint to create a larger picture and is a mode of painting many Post-Impressionist artists tried during the late 19th and early 20th centuries.

Paul Cezanne was first an Impressionist painter and later branched off to discover the importance of geometry in the representation of the world. Cezanne has a wide range of paintings, but his Post-Impressionist contribution can be defined by shape and the simplicity of the world when broken down geometrically. His painting Maison et ferme du Jas de Bouffan (1887) exhibits his geometric skills by representing buildings in the country with simple shapes such as triangles, rectangles, and ovals.

Georges Seurat developed and used Pointillism in his painting A Sunday Afternoon on the Island of La Grande Jatte (1886). The painting took Seurat two years to complete and is 7 by 10 feet in size. The massive painting is comprised of millions of tiny primary-colored dots of paint which, when looked at from a few feet away, meld together to create the image of a park filled with people. Seurat's painting is so influential that Stephen Sondheim and James Lapine wrote the 1984 musical Sunday in the Park with George about the creation of Seurat's masterpiece.

The Starry Night by Van Gogh

Possibly the most iconically emotional of the Post-Impressionists is Dutch painter Vincent van Gogh. His 1889 painting The Starry Night exhibits a night sky and city skyline through the eyes of Van Gogh himself. Van Gogh is known for the raw emotion and turmoil which permeates his paintings. Seeing an exhibit of Van Gogh's work today is like seeing the world through his eyes (and his heart). Today, the art of melding a real-life subject with the artist's inner interpretation and the choice of color, line, and geometry is called Synthetism. This is something Van Gogh excelled at in his career.

As seen in his La Bergere Bretonne (1886), Paul Gauguin was known for his use of sharp lines and harsh contrasts of ideas and colors. The deep contrast between the shepherdess's top and skirt are echoed in the black and white-colored sheep. This is an iconic representation of Gauguin's use of opposites in his paintings.

The significance of Post-Impressionism today can be measured by the mark it has left on the art world. The unorganized Post-Impressionism movement was responsible for the creation of many novel techniques such as Pointillism and Neo-Impressionism. The artists involved with the movement revolutionized modern art, leading to abstract forms like 20th century Cubism and Surrealism.

The paintings by Van Gogh, Cezanne, and the like will be with our society for many years, leaving a lasting mark, not only on the evolution of art but also on the eyes and hearts of all who view it.

Post-Impressionism was a disorganized movement that arose in the late 19th century as a reaction against the Impressionism style dominating the art world of the 1800s. Famous painters Paul Cezanne, Georges Seurat, Vincent van Gogh, and Paul Gauguin are considered today to be the leaders of the Post-Impressionist movement, though they themselves did not claim to be a group of any kind.

Post-Impressionism art has seen many sects and techniques emerge since its first deviation, and the Post-Impressionism definition is clouded with the many different types of paintings which fall under it. From the basis of Synthetism, the technique which blends a natural picture with the artist's interpretation and choice of color and line sprung concepts like Pointillism, the use of tiny dots to create a full image. Post-Impressionism even inspired many artists, who called themselves 'Les Nabis' to express their own spirituality and mysticism through painting.

This lesson introduced you to the nebulous art movement known as post-impressionism. Use the following activities to explore this concept further.

You have now read a little about several post-impressionist artists including Cezanne, Seurat, and Toulouse-Lautrec. Choose one of these artists and do your own research on his life. What inspired him to create? What were his most famous pieces? What kind of life did he lead? Write a short biography of your chosen artist. You can also do research into post-impressionist artists not listed in this lesson. Think outside the box!

As this lesson explained, the term ''post-impressionism'' was applied to a number of artists many years after they produced their works. The same retroactive labeling is true of the metaphysical poets and, to some extent, of existentialist philosophers. Consider why this label was created for the post-impressionists and what impact that has on the artistic canon and our view of history. Write a journal entry explaining your thoughts, with reference to other retroactively labeled groups if you wish.

Why is post-impressionism important?

Post-Impressionism laid way for many new techniques such as Pointillism and Synthetism to arise. It also catalyzed the creation of many modern movements such as Cubism and Surrealism.

Post-Impressionism can best be defined as a movement of art which aims to transform images from the real world with emotion from the artist. Post-Impressionist paintings often differ from one another but maintain this basic description.

Post-Impressionism can branch into many different techniques, but there are a few characteristics which define the basis of the movement. Post-Impressionist paintings include real-life subjects and are always centered around the interpretation of the painter.

The main artists involved with Post-Impressionism did not consider themselves a group. They are Paul Cezanne, Georges Seurat, Vincent van Gogh, and Paul Gauguin.

The Development of Rococo Architecture in Germany

Role of the Salon in 19th-Century France

Neoclassical Style as a Revival & an Influence

Themes of the Romantic Art Period