Nathan Mahr, Shawn Grimsley
Learn about leadership power. Identify the types and sources of power in leadership, learn what personal power is, and see examples of personal power. Updated: 07/19/2022

What is Leadership Power?

Leadership power is the ability to control resources, people, and events to reach objectives and overcome obstacles. Power is important for leaders because it allows them to accomplish tasks and goals that would otherwise be impossible. This way, power can be a positive force that helps leaders and organizations achieve their goals. For example, power can get people to work together towards a common goal or motivate them to do their best.

However, power can also be misused by leaders. When leaders misuse their power, it can lead to negative consequences such as oppression, corruption, and abuse of power. Therefore, leaders must be aware of the potential risks of misusing their power while striving to use it responsibly. For example, leaders shouldn't use their power to unnecessarily control people or take advantage of them. 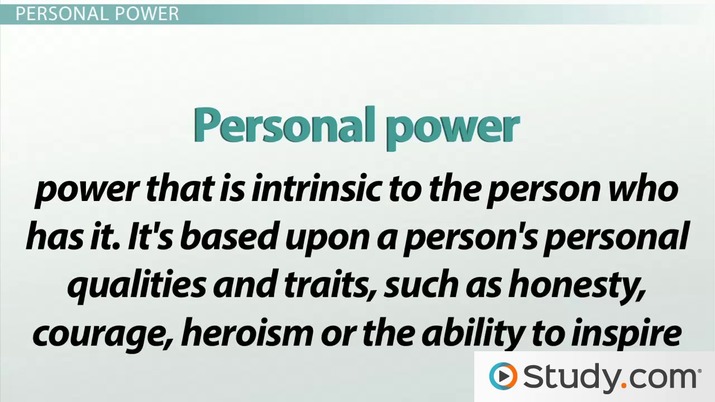 Try it now
Back
Coming up next: Four Functions of Management: Planning, Organizing, Leading & Controlling

Sources of Power in Leadership

One of the most important sources of power is leaders' legitimacy in their position. This means that people recognize the leader's authority to lead and are willing to follow the leader's directives. Legitimacy can be based on factors such as election or appointment to a position, rank within an organization, or experience and expertise.

Types of Power in Leadership

Similar to sources of power, there are a larger variety of types of power that a leader may have at their disposal with various origins. The type of power most effective in any given situation will depend on the goals of the leader, what types of power they have available to them, and the context of the situation. Some of the most common types of power are formal power, position power, legitimate power, reward power, coercive power, and expert power.

Formal power is granted to a person by their appointed position, rank, or role within an organization. It can be the power granted to someone in a leadership role or the power inherent to a person's role in an organization. For example, a police officer has the formal power to arrest someone because it is a part of the police officer's job. Similarly, an engineer has the formal power to sign off on a design because it is a part of the engineer's job.

Legitimate power is derived from a leader's legitimacy or the recognition that others have of a leader's right to exercise power. For a leader to have legitimate power, they must be seen as having the authority to make decisions and take actions. Legitimate power can come from various sources, such as election or appointment to a position, rank within an organization, or experience and expertise.

One advantage of legitimate power is that it typically has the inherent attribute of trust. Others recognize legitimate power as being held or used justly due to the leader's position, role, or expertise. As such, legitimate power often leads to voluntary compliance from followers, as people generally want to comply with those with the legitimate authority to make decisions. As with the other types of power, leaders can also abuse legitimate power if not used carefully or with some level of oversight. Additionally, legitimate power can sometimes come with the risk that a leader may become complacent or overconfident in their abilities.

Reward power is a type of power that leaders can use to influence the behavior of others by offering rewards. Rewards can take many forms, such as financial bonuses, promotions, or recognition. Leaders use reward power to motivate others to achieve desired outcomes or to encourage certain behaviors.

One advantage of reward power is that it can effectively motivate people to achieve desired results. Additionally, rewards can be used to recognize and reinforce desired behavior, which can help to create a positive feedback loop. On the downside, reward power can quickly lead to favoritism and a potential sense of entitlement among those rewarded. Additionally, using rewards excessively can lead to a reliance on external motivation, which can be detrimental in the long term.

Coercive power is a type of power that leaders use to influence the behavior of others by threatening them with negative consequences. Coercive power typically forms threats, such as demotion, punishment, or even termination. Leaders use coercive power to force others to comply with their demands or to achieve desired outcomes.

Coercive power can be an effective way to get people to comply with orders or to achieve desired results in a short period. Coercive power can also help ensure that leaders obey and that tasks are completed efficiently. However, one disadvantage of coercive power is that it can lead to resentment and resistance from those who are on the receiving end of threats. Additionally, coercive power can quickly lead to a climate of fear and mistrust, which can be detrimental to an organization in the long term.

What is Personal Power?

Like any other kind of power, personal power can be used for good or evil depending on the person's character. Some advantages of personal power in leadership include the ability to motivate and inspire others and the ability to influence the decisions and actions of others. Disadvantages of personal power are similar to those of other types of power, such as the potential for abuse, coercion of another person to their detriment, and the potential to create a sense of entitlement.

John is a very confident person. Whenever he walks into a room, he commands attention. He is also very articulate and can make people believe in his vision. When he speaks, people listen. John and his attributes provide a great personal power example. This is because John's confidence and ability to articulate his vision inspire others to follow him of their own free will.

Leadership power is the ability to control people, resources, and events to achieve goals, complete objectives, and overcome obstacles. There are many sources of power in leadership such as position, personal attributes, knowledge, and expertise. There are also many categories and types of power. Some of these include formal power, position power, legitimate power, reward power, coercive power, expert power, and personal power. Formal power is based upon a person's position, place, or role within an organization. For example, a police officer has formal power over citizens because of their position. Position power is similar to formal power but focuses more on a person's job title or rank within an organization. For example, a manager has the position of power over their subordinates. It is important to note that formal and position power are not based on popularity but are instead intrinsically derived from the person's position or role of authority.

Legitimate power is based on a person's legitimacy or recognized authority from others to exert influence, decision-making, and power. Reward power is based on the ability to give rewards, coercive power is centered around the ability to punish, and expert power comes from a leader's knowledge or expertise. A final form of power worth mentioning is personal power. Personal power is based on someone's attributes that inspire people to follow the leader of their own free will. It is intrinsic to the person who has it. A charismatic leader that inspires others to follow them through trust, confidence, and charisma is an example of someone with personal power.

What are the different types of leadership powers?

What are sources of power?

Sources of power are the places where power flows from. These sources can include expertise, a position of authority, personal attributes, or even personal or physical strength.

Try it now
Back
Create an account
Power in Leadership Types & Sources | What are the Leadership Powers?
Start today. Try it now
Business 111: Principles of Supervision

Power in Leadership Types & Sources | What are the Leadership Powers?
Related Study Materials

Applying Leadership Skills in the Workplace

Setting Goals as a Team

Practicing Ethical Behavior in the Workplace