Presidential Reconstruction represents the period directly following the assassination of President Abraham Lincoln and the appointment of then Vice President Andrew Johnson to the position. Lincoln's assassination on April 14, 1865, at Ford's Theatre in Washington, D.C. came only 5 days after Confederate General Robert E. Lee's surrender in Virginia. While President Lincoln had numerous conversations surrounding the ultimate reconstruction of the South following the conclusion of the Civil War, he had yet to put much of his ideas into action as his death came mere days after the beginning of the end of the Civil War in the United States. Ultimately, the period of Presidential Reconstruction under President Andrew Johnson would be short-lived and the Radical Republicans of the Reconstruction era would ultimately take control of the process and policy during the Reconstruction era. 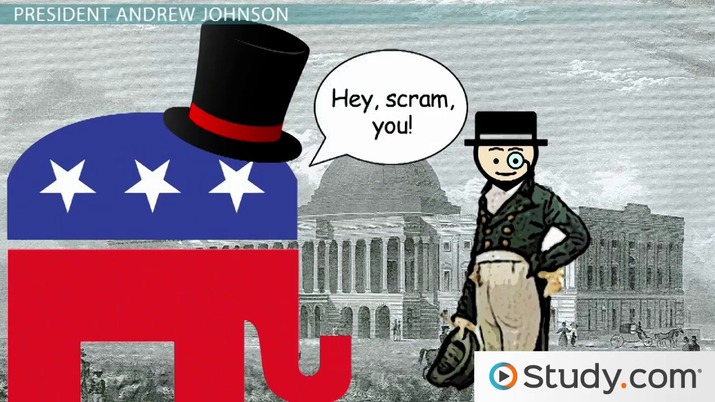 Coming up next: The Impeachment of Andrew Johnson: Conflict Between President and Congress

In the winter of 1863, President Abraham Lincoln outlined a plan for the ultimate reconstruction of the South following the conclusion of the Civil War. The 10 Percent Plan proposed by Lincoln provided a pathway for the reintegration of states who had seceded during the Civil War and sided with the Confederacy in the conflict. The plan provided for states to be reunified once 10 percent of the voters of that state's electorate, as judged by the 1860 election period, had sworn official allegiance to the United States and made a pledge to support the abolition of slavery as outlined in the Emancipation Proclamation. Once the appropriate number of voters had been accounted for, the 10 Percent Plan outlined how delegates would then be chosen by the electorate to debate and author new state constitutions and establish new state governments.

Of course, this plan was far less stringent than the goal of the Radical Republicans who opposed amnesty for those who had sided with the Confederacy during the Civil War. These mostly Northern Republicans did not believe that the approach by Lincoln would ultimately be successful at quashing the Confederacy in the South forever. Their opposition to Lincoln's measured approach would serve as a contentious debate over the aim and approach of the Reconstruction era in American politics. The Wade-Davis Bill of 1864 represents Congress' response to the basic premises included in Lincoln's 10 Percent Plan. The Wade-Davis Bill made it clear that Radical Republicans wanted more strict rules for reintegration into the Union and to give Black Americans the right to vote.

Following Lincoln's assassination, Vice President Andrew Johnson assumed the office of the presidency and began the Presidential Reconstruction period in American History. Andrew Johnson was a Southern Democrat who had joined with Republican Abraham Lincoln on the National Union ticket. The National Union Party was devised by Lincoln and the Republican party as a way to unify the Republican party and factions of the Democratic party including War Democrats and Unionists. Even though the National Union Party had a noble idea to unify both Republicans and Democrats toward the end of the war, Andrew Johnson was still viewed by many as both a Democrat and a Southerner which would ultimately prove to be a hurdle for him with Southern elites and Radical Republicans alike. President Johnson was from Tennessee and was a staunch supporter of the basic tenets of state's rights. President Johnson's administration struggled to bridge the divide between these two powerful forces in the conversation surrounding Reconstruction following the Civil War. The tensions between these two forces would ultimately be detrimental to the effectiveness of Johnson and his administration to enact many of the provisions of Lincoln's 10 Percent Plan during the Reconstruction era.

The period of Presidential Reconstruction began during a Congressional recess in May of 1865. President Johnson outlined plans that would provide opportunities for Confederate soldiers, sympathizers, and even high-ranking officers to receive pardons for their crimes against the Union. Similar to Lincoln's plan, reunification could occur following the affirmation of loyalty of 10 percent of the 1860 electorate. In addition to providing pardons and reunification, Johnson's plan provided an opportunity for those who did pledge their loyalty to the Union to receive back property seized by the Union forces during the war.

President Johnson was a believer in state's rights and sovereignty. He went as far as to say, ''..there is no such thing as reconstruction. These States have not gone out of the Union, therefore reconstruction is unnecessary.'' This type of statement enraged the Radical Republicans who believed Johnson was overstepping his authority by proposing a mild response to the Reconstruction period following the war and Lincoln's assassination.

What Happened to Andrew Johnson?

When Congress returned to session, they took up debate on the reconstruction of Southern states. Radical Republicans were not happy with Johnson's seemingly lenient approach and desired a much stricter reunification process. The Congressional election of 1866 provided the avenue for the Radical Republicans to take control of the Reconstruction process. Securing a failsafe majority in both houses of Congress, the Republicans had the votes needed to overcome a potential Presidential veto of the legislation.

The Military Reconstruction Act of 1867 provided the avenue proposed by the Republican-led Congress for Southern states to rejoin the Union and was much stricter than that proposed by Johnson. This act would effectively place Southern states under military rule. The act went on to require that states who wished to be readmitted must ratify the 14th Amendment which would grant citizenship rights to freedmen. The act also provided opportunities for African Americans to vote and for their civil rights to be protected using the power of recently created agencies such as the Freedmen's Bureau. Black codes, instituted in the South, attempted to counter Federal rules by controlling the ways in which African Americans would be able to gain employment, housing, and also how they would be treated in the legal system. Black codes also provided strict penalties to those who did not comply and varied from state to state. Many states simply reworded former Slave codes and implemented them to continue the cycle of injustice against Black citizens.

President Johnson was not satisfied with most of the legislation surrounding the Reconstruction era. Johnson regularly vetoed legislation including the Reconstruction and Civil Rights Acts. Congress overturned his vetoes using their majorities in both houses and effectively checked the power of the presidency during the Reconstruction period. Congress also went further and passed legislation limiting the President's power. The Tenure of Office Act of 1867 provided protections for those entrusted in the President's administration with carrying out the formerly passed Reconstruction and Civil Rights Acts. Edwin Stanton, Secretary of War under Johnson, held a lot of power for the ultimate reunification of the South under the Reconstruction-era acts. President Johnson and Stanton had disagreements about many of the provisions and approaches, ultimately leading Johnson to dismiss Stanton from his position as Secretary of War. Johnson's decision, and Edwin Stanton's decision to not step down set up a showdown between the President, Stanton, and Congress. The House of Representatives drew up Articles of Impeachment against President Johnson and the Senate conducted a trial. Johnson was ultimately impeached, but not convicted and removed from office by the Senate. This act effectively curtailed the power of President Johnson making him a lame-duck president until the next elections in 1868 which saw Union war General Ulysses S. Grant assume the office of the President of the United States.

President Abraham Lincoln's goals for the ultimate reconstruction of the South following the Civil War pitted him against Radical Republicans who desired a much stricter approach to the reunification of the South and North. Lincoln's 10 Percent Plan would be put to the test following his assassination when Vice President Andrew Johnson assumed the position of President of the United States. President Johnson's Presidential Reconstruction period would prove to be short-lived as Radical Republicans gained additional power following Congressional elections in 1866. Ultimately, President Johnson's battles with Republicans in Congress would result in his powers being drastically reduced by the legislative branch of government and his impeachment from office in May of 1868.

What was presidential and radical Reconstruction?

President Johnson was unsuccessful in his goals as defined during the period of Presidential Reconstruction. Johnson did not approach the issue of reconstruction the same as the majority of Congress who believed in a stricter approach. Johnson's plans and ultimately vetoes were overcome by Congress following a Congressional election where Radical Republicans in Congress assumed a majority position.

What was the major theme of presidential Reconstruction?

The major theme of the period of Presidential Reconstruction originally outlined by Lincoln and attempted by Johnson was to ensure a smooth transition for states who had seceded to rejoin the Union. This was at odds with Radical Republicans who desired a much more strict approach to reunification after the Civil War.

What is the difference between presidential and congressional Reconstruction?

Johnson's plans were ultimately rejected by Congress as they assumed a leadership position in legislating during the Reconstruction era. Johnson attempted to veto several measures passed by Congress; however, the vetoes were ultimately overridden and enacted by the Radical Republican majority.

What was the difference between Lincoln's and Johnson's Reconstruction plans?

The main difference between Lincoln's plans for reconstruction and Johnson's was in regard to the rights of freedmen following the conclusion of the Civil War. While Lincoln wanted to ensure rights, such as voting, for the formerly enslaved, Johnson's plan did not have these same requirements.