What is Prime Factorization? 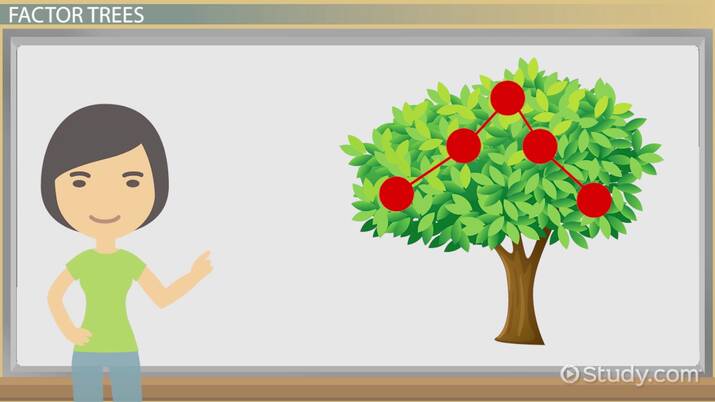 Coming up next: How to Multiply and Divide Rational Expressions

5 is an example of a prime number because it can only be divided by 5 and 1 evenly.

We also have a name for non-prime numbers:

To see what prime factorization means, we can apply it to a composite number. Let's start by going over the prime factors that make up 24.

For instance, if we look at the number 24:

The prime numbers under 30 are very commonly used, so it may be helpful to memorize them.

As another example, here are the steps for finding the prime factorization of 126:

We can also line prime factors up in a tee chart to help organize the process of serial factorization. We see that the prime factors are circled on the left side of the chart. The final number we end up with on the right side will also be a prime factor. Look at the example with the number 126.

The factor tree method is performed just as it sounds, by placing the factors in a tree shaped formation downward from the original number. The difference between the factor tree method and serial factorization is that instead of starting with the smallest prime factor that will go into the number, we can start with any combination that will go into the number. Once a prime factor is found, that branch of the tree comes to a stop.

Let's look at some prime factorization examples to help determine how to work with the factor tree model:

Using the factor tree method with 96, we have the following steps:

Prime factorization and greatest common factors (GCF) go hand in hand. The greatest common factor is the number that is the largest number (or factor) that will divide into two different numbers. We can determine the GCF quickly by knowing what prime factors a number has in common. Let's use the numbers that have already been factored: 96 and 126.

The GCF of 96 and 126 can be found by multiplying the prime factors found in their prime factorizations that they have in common: 2 * 3 = 6. The greatest common factor between 96 and 126 is 6.

Greatest common factors can also used for simplifying fractions. For example, we can simplify 96 over 126 by dividing the top and bottom by its GCF of 6.

The least common multiple (LCM) is the smallest number that two numbers can be multiplied into; it can also be described as the lowest common multiple. A multiple of a number is the number we get when we multiply it by another number. An example of this would be the multiples of 3: 3, 6, 9, 12, 15, 18... It is important to be able to find the LCM of two numbers for finding common denominators while adding and subtracting fractions.

To find the LCM between two numbers, we can compare their lists of multiples:

For example, here are the lists used to find the LCM of 2 and 3:

While the list method of finding least common multiples can give us a better understanding of what multiples are, we can use prime factorization to easily determine the LCM of any two numbers.

Let's look at the prime factorization of 21 and 9 to determine the LCM of the two numbers. This process is also shown in the corresponding image.

Finding the LCM of 21 and 9, we start out by looking at the prime factorization for each number.

In this lesson we learned about the following:

How do you find the prime factorization?

There are a couple methods for finding the prime factorization of a number. These include using a factor tree and serial factorization.

What is the definition for prime factorization?

Prime factorization (verb): It is the method in which we obtain the prime numbers that multiply into a larger number.

Prime factorization (noun): It is also what we call the final answer of one of these problems.

What is the prime factorization of 36?

How do you find the prime factorization of a number?

What is the Greatest Common Factor? | GCF Examples

What Are Monomials & Polynomials?

How to Solve Word Problems That Use Percents

How to Simplify a Subtraction Expression

Variable in Math Uses & Examples | What is a Variable?

What is a Factor Tree? - Definition & Example