Nathan Murphy, Erica Cummings
Read about President George Washington's Proclamation of Neutrality. Learn the purpose of the Neutrality Proclamation of 1793, and discover its significance in America's foreign policy. Updated: 01/14/2022

What was the Proclamation of Neutrality

The Proclamation of Neutrality was made in 1793 by President George Washington. It declares that the United States would not join any wars and would continue to trade with all involved warring countries, even if two of them are fighting against each other. Many politicians at the time did not agree with this proclamation and doubted Washington had the authority to decide foreign policy in this way.

What was the Purpose of Washington's Neutrality Proclamation?

The Constitution specifically grants the President the ability to sign treaties with other nations, however, there is no provision that specifically allows them to declare neutrality. While Washington sought to limit his power as much as possible, he thought this proclamation was necessary because of the developments in Europe.

In 1793, France and Great Britain were at war, and politicians were calling for the United States to side with one of these European powers. Even though Washington was a general in the American Revolution, he did not think the war was the answer in this instance, and felt taking sides in this conflict, or any European war, would weaken the country and potentially put it in danger. Moreover, France and Great Britain were the the country's two largest trading partners - going to war or siding with either of these countries would negatively impact the domestic economy and access to goods. Additionally, Washington wanted to keep this war as far from the American coast as possible, so he banned British and French warships from entering U.S. ports to prevent as much conflict as possible within the country's borders.

During the American Revolution, the French King Louis XVI agreed to help the continental army in order to weaken his country's enemy, Great Britain. The two countries signed a military alliance and the French King immediately sent thousands of French soldiers to the Thirteen Colonies to provide naval defense, since the United States did not have any warships. The French participation in the war was a major reason the British eventually lost and the colonies gained their independence. However, by the time George Washington began his second term in office, France was undergoing massive change. The French Revolution began when the middle class of France rose up against the King to create their own democratic government. The monarchies of Europe were frightened, because if commoners could destroy the monarchy in France, they may try to do the same in other European nations. This led Great Britain and other European countries to declare war on the new French government in an effort to restore the French monarchy. 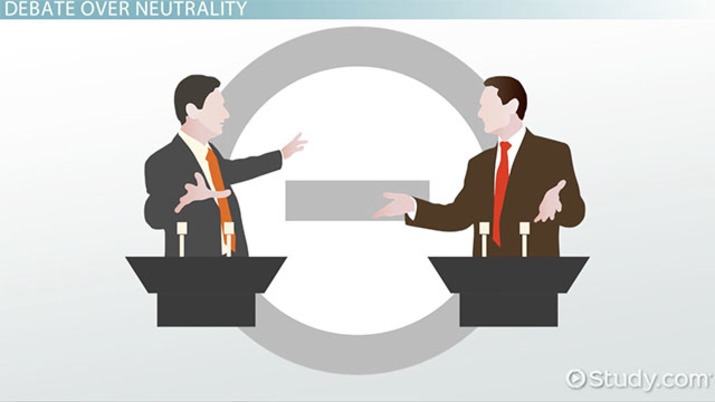 Coming up next: What Is a Patriot? - Definition & History

Regardless of whether an American citizen wanted the United States to support the new French Republic, there was another issue surrounding this proclamation. The Constitution did not state that the President had the authority to control the country's foreign policy directly, and did not mention the ability to make the United States neutral in conflicts. George Washington was focused on ensuring the young United States remained as stable as possible, and even though he wanted to limit the powers of the President to ensure this, he felt declaring neutrality was a safe expansion of Presidential power. Washington's Secretary of Treasury, Alexander Hamilton, authored essays circulated around the country to support the idea that a President had the ability to do this. He composed these under the name Pacificus, which means peacemaking in Latin. Hamilton's main argument was that the President had broad authority to do countless acts not listed in the Constitution as long as they were needed to perform their duties as Chief Executive.

Thomas Jefferson and James Madison were critical of this point of view because they thought straying from the Constitution, especially this early in the Republic, was dangerous. Regardless whether they wanted the United States to remain neutral, they felt it should be the decision of Congress, not the President. Madison, who wrote the Constitution, decided to write essays in response to 'Pacificus', and he decided to use the name Helvidius. Helvidius was a critic of the Roman Emperor in the Roman Empire and thought Rome's Senate should have been making more decisions, not the leader. In these essays, Madison argued that Washington was overstepping his authority as President and could not solely decide if the U.S. was neutral in a specific conflict or as a general matter of foreign policy.

Impact of the Proclamation of Neutrality

Jefferson and Madison did not agree that Washington should be able to issue a neutrality proclamation, however, since Washington had so much support from the American people his declaration was accepted. Washington knew he was setting the example for all future Presidents, and accordingly very rarely expanded the expressed authorities he was given by the Constitution. The conflict between France and Great Britain was an exception for George Washington because in the 1790s the United States still had few factories. Instead, the vast majority of the finished goods Americans purchased were made in either of these European countries or their colonies. By taking a side, the U.S. would lose the ability to trade with one of the countries and the already fragile economy would be weakened further.

Once it became clear George Washington was not interested in helping the French Republic, the new French Ambassador attempted to force the country into the European war. In 1793 the French Ambassador to the United States, Citizen Genet , arrived in South Carolina. Typically, a diplomat would immediately travel to the Capital to talk to the head of government as a sign of respect. However, Citizen Genet traveled for over a month in the southern states, organizing an American militia force which was sent to Spanish Florida to attack the territory. Spain was a British ally at the time, so this strategy had the potential to force the United States into a war on the side of France.

Citizen Genet's actions soured French-American relations because Genet was knowing attempting to violate the Proclamation of Neutrality. Despite this attempt, American neutrality remained and the U.S. managed to avoid conflict with either country for several years. Immediately after Washington left office, the French became increasingly hostile to American ships and began to steal American sailors and force them to work for them. This made tensions even worse between the two countries, however, President John Adams succeeded in following the proclamation, keeping the United States neutral. Without another war in the 18th century, the young United States was able to grow its economy and establish a stable government.

Significance of the Proclamation of Neutrality

During the 19th century, the United States was involved in many wars, many of which it started or the government was hoping would start. However, a major aspect of American foreign policy which remained constant was that the United States did not involve itself with the conflicts in Europe. As an industrializing nation, the United States could not afford to enter into several wars with the European powers, regardless of the influence the country would gain.

It was not until World War I that American foreign policy broke away from Washington's Proclamation of Neutrality. By the early 1900s, the United States was involved in the global economy but Americans still embraced the idea of neutrality. When World War I broke out, President Woodrow Wilson campaigned on keeping the country out of the war. However, by 1917, Wilson broke this promise. Even though the United States was a victor in this war, many Americans still wanted to practice neutrality and did not want the country to become involved with European problems.

Once World War II began, many citizens were again hesitant of American involvement. The attack on Pearl Harbor changed the popular opinion, and once the war was over, the idea of American neutrality has disappeared. The United States was one of the most powerful countries in the world, and by 1950, most Americans had abandoned the idea of neutrality. They instead thought the country had a duty with its power and wealth to protect other nations from being influenced by ideologies, such as Communism.

The Proclamation of Neutrality was issued by George Washington. This declaration stated that the United States would remain neutral in the conflict between France and Great Britain, surprising to some since the French monarchy supported the colonists when they were fighting for their independence. However, President Washington did not think the U.S. had any obligation to the new French Republic, only the deposed French King.

In order to force Washington and the United States to ally with France, the French Ambassador, Citizen Genet came to South Carolina. Instead of going to see the President, he immediately attempted to coerce an American militia to violate Washington's proclamation. Regardless of Washington's stance on supporting France, some politicians, like Madison and Jefferson, questioned whether the President could issue a proclamation of this kind.

Madison wrote essays under the name Helvidius in order to argue that Congress should be making decisions of this kind. Alexander Hamilton defended the President in a series of essays he wrote under the name Pacificus. He argued that the Executive had broad power to act beyond the Constitution in order to effectively lead.

What was the neutrality Proclamation of 1793 and why was it important?

The Neutrality Proclamation of 1793 was issued by George Washington. It was a declaration that the United States would remain neutral in the conflict between France and Great Britain. This was important because the United States was still very young and likely would not have been able to survive another war so soon after the American Revolution.

How did the proclamation of neutrality affect the US?

The Proclamation of Neutrality enabled the United States to focus on economic development and fortification of its military. However, it also sparked a debate over how much power a President should have and whether they can go beyond the powers granted to them by the Constitution.

Why did Washington issue a proclamation of neutrality in the war between France and Britain?

What did the proclamation of neutrality do to warships?

This proclamation banned British and French warships from entering American ports. This was a way to prevent the U.S. from becoming entangled in this conflict by keeping the war as far away from the United States as possible.

Molasses Act of 1733 Overview & Importance | What Was the Molasses Act?