Joanna Tatomir, Danielle Haak
Learn about protists vs. bacteria. Discover if protists are prokaryotic or eukaryotic, if bacteria are single-celled, and how protists are different from bacteria. Updated: 10/13/2021

If we take a drop of pond water and place it on a slide under a microscope, we can see a whole world full of invisible creatures not apparent to the naked eye. Many of these creatures are microscopic single-celled organisms that can be seen swimming or simply mixed in with the water. These microorganisms typically consist of protists and bacteria found freely living in various environments, such as soil, water, and even our own bodies.

Let's explore some of the characteristics that separate protists from bacteria. 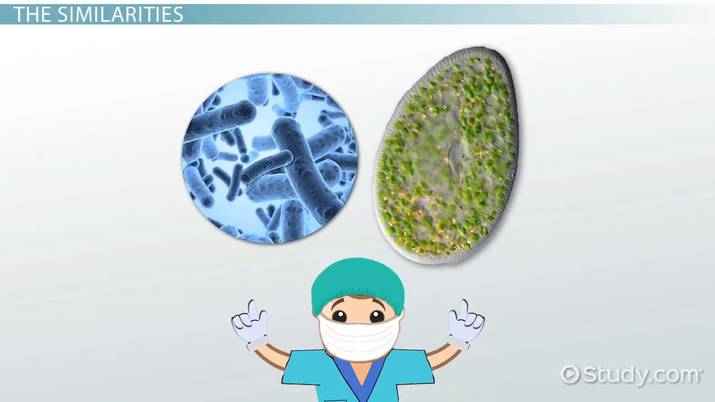 Try it now
Back
Coming up next: Autotrophic Protists: Definition, Characteristics & Examples

Some general characteristic shared by all protists include:

Although all belonging to the same kingdom, protists can be further classified into three general groups:

Animal-like protists are heterotrophs, or organisms that acquire their nutrients by eating other organisms. To ingest foods, they form enzyme-containing vacuoles that engulf and digest nutrients and other particles of food. Animal-like protists often have the ability to move through the use of specialized structures such as flagella, cilia, and pseudopods, which literally translates as "false feet." Pseudopods are foot-like protrusions of the cytoplasm that help protists to move, much like the feet of an animal.

Fungus-like protists are also heterotrophs which subsist upon decomposing material. Molds represent the primary form of fungus-like protists. There are two types of molds: slime molds and water molds. Slime molds are usually found on the decomposing remains of vegetative material such as leaves and logs. Water molds, as their name implies, are found in moist, aquatic environments. Because slime and water molds subsist upon decaying materials, they are often referred to as decomposers. All fungus-like protists consume food via the absorption of nutrients through the body wall.

Protists use both asexual and sexual reproduction, depending on the species. Some organisms utilize binary fission, in which a cell splits into two identical cells. Others produce spores, a type of haploid reproductive cell, which can join with another spore to create a diploid zygote used for sexual reproduction.

Are Protists Prokaryotic or Eukaryotic?

Although a majority of protists are unicellular and might be confused for bacteria, protists actually belong to the domain Eukarya. Eukaryotes include plants, animals, and fungi whose cells possess membrane-bound organelles and nuclei. Like other eukaryotic organisms, protists possess membrane-bound organelles such as the nucleus and mitochondria. Some protists are characterized by multicellular complexity, and even many species of single-celled protists possess a level of complexity not found in prokaryotes. Many researchers believe that protists evolved from prokaryotes and that subsequent, more complex forms of eukaryotes may have evolved from protists.

There are numerous examples of protists, some of which are more familiar to people than others. Slime mold, for example, is not a true fungus, but instead represents a group of fungus-like protists that live together as a group in a plasmodial blob. They are often yellow or red in color and are capable of slowly moving in search of foods like bacteria, fungi, and other protists.

Microorganisms from the genus Giardia represents another example of a protist. Giardia are unicellular protists which belong to a special group referred to as protozoans. Protozoans are a specific type of protist that causes illness in humans and other animals. Giardia is transmitted via contaminated sources of food and water and often causes acute or chronic cases of diarrhea.

In much the same manner, the protozoan genus Plasmodium is transmitted to humans via mosquito bites, potentially resulting in malaria. Some of the symptoms of malaria include pain, anemia, weakness, and diarrhea.

Although both protists and bacteria sometimes have a similar appearance under the microscope, bacteria have a number of characteristics that distinguish them from protists. First of all, bacteria are always unicellular, even when they exist in a community such as colonies or biofilms (a sticky substrate in which different bacterial species can live). Moreover, bacteria are prokaryotic, as they lack membrane-bound organelles. Bacteria also come in a variety of shapes, such bacilli (rod-shaped), cocci (sphere-shaped), and spirilli (spiral-shaped). Instead of being contained in a nuclear envelope, the genetic material in bacteria consists of circular DNA which floats in the cytoplasm.

The primary method of reproduction in bacteria is binary fission, a form of asexual reproduction. During binary fission, the bacterium copies its genetic material, which is distributed to opposite sides of the cell. Then the cytoplasm is split in two and a new cell envelope is synthesized. In some species of bacteria, budding is also used for reproduction. Budding represents a process in which an outgrowth of a cell produces a new cell.

Are Bacteria Single-Celled Prokaryotes or Eukaryotes?

There are numerous examples of bacteria in our environment. While some bacteria cause illness and disease in humans, there are also many examples of beneficial bacteria. Probiotics such as Bifidobacterium and Lactobacillus represent healthy gut flora that facilitates the process of digestion in humans and other mammals.

How Are Protists Different from Bacteria?

The table below summarizes the major differences between protists and bacteria.

Some species of protists and bacteria may look similar under a microscope. However, these two groups of organisms possess characteristics that differentiate them from one another. Protists are unicellular or multicellular eukaryotes that have membrane bound organelles, genetic material contained within the nuclear envelop, and a preference for moist, aquatic environments. There are three types of protists:

Protists are generally harmless to humans, although a special group, known as protozoans, are capable of causing illness and disease in humans.

Bacteria are unicellular prokaryotic organisms that come in several different shapes, such as bacilli (rods), cocci (spheres), and spirilli (spirals). Bacteria lack membrane bound organelles and have circular DNA that floats in the cytoplasm. Many bacterial species are beneficial to humans, such as probiotics, while others are capable of creating serious infections requiring treatment by antibiotics.

Is a virus a protist or bacteria?

A virus is neither a protist nor a type of bacteria. Viruses are not considered to be living as they lack the ability to reproduce on their own, and instead must rely upon their hosts for replication.

Protists consist of both unicellular and multicellular organisms which have a nucleus and membrane-bound organelles. Therefore, protists are eukaryotic, rather than prokaryotic.

Try it now
Back
Create an account
Protists vs. Bacteria | Are Protists Prokaryotic or Eukaryotic?
Start today. Try it now
Microbiology: Tutoring Solution

Protists Facts, Benefits & Importance | What do Protists do?