Melissa Bialowas, Laura Foist, Christianlly Cena
Learn about pyridine. Understand the pyridine formula, its structure, its properties, such as boiling point, density, and molar mass, its reactions, and its uses. Updated: 06/09/2022

Pyridine is a basic organic compound with a heterocyclic structure. It is similar to benzene, as it has one methine group replaced with a nitrogen. It is a colorless liquid, known for a particularly foul odor and many hazardous properties. The compound was discovered in the late 1840s by a chemist named Thomas Anderson at the University of Edinburgh. Anderson heated animal bones to high temperatures and produced several different liquids. One of these was pyridine, which Anderson named after the Greek word for fire (pyr).

So, what is pyridine made from? The pyridine formula is {eq}C_{5}H_{5}N {/eq}. It has a ring of five carbons, five hydrogens, and one nitrogen. 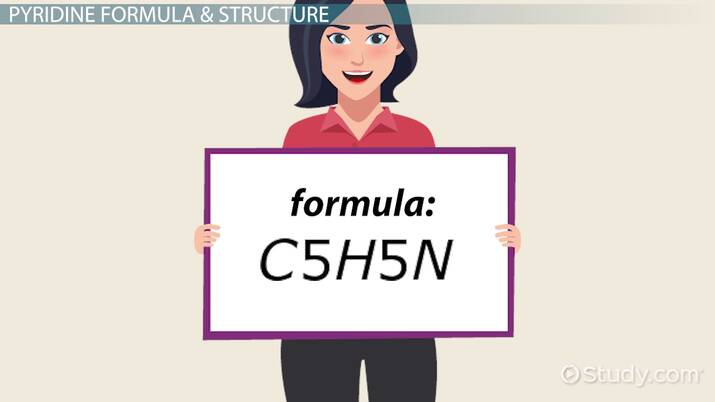 Coming up next: Pyridine in Medicine: Uses & Synthesis

Pyridine forms a ring with alternating double and single bonds. Ring compounds are very stable. It is the same structure as benzene, with one methine group replaced with a nitrogen. The properties of pyridine are different from those of benzene, however. The nitrogen makes a tertiary amine, able to have reactions including oxidation and alkylation.

The amine creates a slight dipole, or electrical pull, on the ring. This draws electrons closer to the nitrogen instead of being shared equally with all of the atoms. This makes the occurrence of an electrophilic reaction highly unlikely. Nucleophilic reactions happen so that positive charges are not placed on the nitrogen. The nitrogen makes pyridine a weak base, and it is completely miscible with water. Pyridine has a strong, putrid, fishy odor. It can be synthesized from crude coal tar, acetaldehyde, ammonia, or formaldehyde.

Interestingly, because the nitrogen draws electrons toward it, there are three different chemical shifts on the hydrogens. This means that based on the position of the molecule, the H Nuclear Magnetic Radiation, better known as H-NMR, contains three signals for pyridine.

The two hydrogen atoms right next to the nitrogen are in the ortho position. They have a chemical shift of 8.6.

The two hydrogen atoms next to the ortho position are in the meta position. They have a chemical shift of 7.25.

The hydrogen atom directly across from the nitrogen in the ring is in the para position. It has a chemical shift of 7.64.

Pyridine has many hazardous properties. It is considered a highly flammable liquid and vapor. The odor is strong enough that most people will immediately detect if it is present at harmful levels. It is harmful if swallowed or if it comes into contact with skin, causing chemical burns. It can cause dizziness, headaches, lack of coordination, nausea, and loss of appetite. It causes serious eye irritation and toxicity if inhaled.

Long-term exposure to pyridine results in liver, heart, and kidney damage. It is known that it causes cancer in animals, and it is likely to cause cancer in humans as well. It is considered a hazard to all aquatic life.

Pyridine is considered a Lewis base. It readily donates a pair of electrons to a Lewis acid, forming pyridinium salts. The hydrogenation of pyridine creates piperidine. This is formed using either nickel, cobalt, or ruthenium as a catalyst at increased temperatures. Reduction reactions of pyridine create dihydropyridine in the presence of magnesium and zinc, while tetrahydropyridine requires electrochemical reduction.

Pyridine has many uses in laboratories and manufacturing, including:

Pyridine is an aromatic ring with a nitrogen. It has five carbons, five hydrogens, and one nitrogen and is typically found as a liquid. The nitrogen is more electronegative than the carbon that surround it. This creates a dipole on the molecule drawing electrons toward the nitrogen. Pyridine is used in many manufacturing and chemical industries as a solvent, catalyst, and more.

Pyridine is a good candidate for nucleophilic substitutions. Because the nitrogen is electronegative, it resists having a partial positive charge. This is why when substituents are usually found in the meta position, which does not add the charge to the nitrogen. Pyridine is considered a weak Lewis base.

This activity will help you assess your knowledge of the structure and physical properties of pyridine.

For this activity, carefully read and select the best answer that completes each of the given statement. To do this, print or copy this page on a blank paper and circle the correct answer.

1) Niacin is a naturally-occurring vitamin present in a wide variety of food that reduces __________ build-up in the body.

3) What is special about aromatic compounds?

A. These compounds are radioactive.

B. They are stable and very unreactive.

D. The compounds are sweet-scented.

4) A nucleophilic reaction is highlighted by an electron-receiving molecule is paired with a positively-charged molecule.

5) Carboxylic acids are electronegative and exhibit strong __________ bonding between molecules.

7) The following are positions where chemical shifts occur in pyridine except for __________.

Is pyridine a strong or weak base?

Pyridine is considered a weak Lewis base. It is weak because of the dipole caused by the nitrogen atom in an otherwise strong ring.

What is pyridine used for?

Pyridine is used as a solvent, in pharmaceuticals, in paints, and in textiles. It is also used in laboratories as a catalyst. It finds additional uses as a disinfectant, and it is found in some pesticides and antifreezes.

Alkaloid Structure & Examples | What are Alkaloids?

Chromophore Overview & Examples | What is a Chromophore?