What Is the Pythagorean Theorem?

Pythagoras was a fifth century BCE Greek philosopher and mathematician who is credited with several scientific and mathematical discoveries, most notably the Pythagorean theorem. Although the Pythagorean theorem was popularized by Pythagoras, other ancient mathematicians in ancient civilizations such as Babylon and China had previously formulated the idea. Pythagoras was the first to prove its validity for all right triangles. 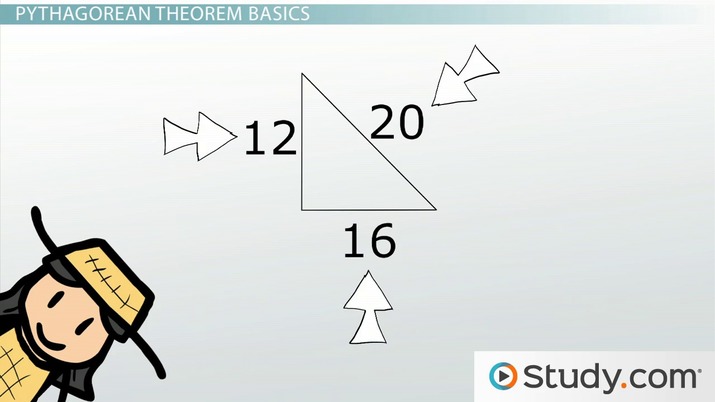 Coming up next: How to Identify Similar Triangles

The Pythagorean theorem can be proven in several different ways. To prove the theorem algebraically, begin with a diagram of a tilted square inside another square.

Another way to prove Pythagoras' theorem is by using the similar triangle method. Start by constructing a right triangle. Then, from the vertex of the right angle, draw a line perpendicular to the hypotenuse, as indicated in the diagram.

For triangles ABC and ADB:

For triangles BDC and ABC:

Thus, all three triangles are similar, so their sides are proportionate.

Another mathematician, Euclid, proved the theorem in yet another way by constructing squares from each of the sides of the right triangle. Euclid's method is often referred to as the Windmill proof because its shape resembles that of a windmill.

Since the Pythagorean theorem has been proven valid by many different methods, the formula {eq}a^2 + b^2 = c^2 {/eq} can be reliably used to find the missing side length of a right triangle. The length of a hypotenuse can be calculated using the formula when the other two side lengths are given, or the length of one leg can be calculated if only a leg length and hypotenuse are given. For example, use Pythagoras' formula to find the hypotenuse when the lengths of the other two sides are 3 and 4. To find the hypotenuse, substitute 3 and 4 for a and b, then solve for c.

Note: When practicing how to do the Pythagorean theorem, be sure to square the a and b terms before adding them together.

Some geometry problems require determining which type of triangle is present. For these types of problems, the converse of Pythagoras' theorem will be helpful. The converse of the Pythagorean theorem states that if the sum of the squares of the shorter two legs of a triangle equal the square of the longer side, then the triangle is a right triangle.

To reinforce how the Pythagorean theorem works, follow along with these examples:

Example 1: Find the length of side a of a triangle with side b = 7 and a hypotenuse of 10.

Solution: First plug the numbers into the formula. Then, simplify and solve for the variable a.

Example 2: Find the hypotenuse of an isosceles right triangle with leg lengths of 13.

Solution: The legs of an isosceles right triangle are both the same, so

Solution: Because a rectangle has four right angles, the diagonal of the rectangle is the same as the hypotenuse of the two triangles it forms. So, the length of the rectangle can be found using the Pythagorean theorem.

What Is the Pythagorean Theorem Used for?

In addition to being a useful tool in solving geometry problems, the Pythagorean theorem is useful in many every day and professional settings. Construction workers and painters may use the theorem to figure out how long of a ladder is needed to reach certain heights. Engineers rely on the theorem in designing bridges, roads, and maps. The theorem is also helpful in navigation, assisting in determining the shortest distance or most efficient path.

The Pythagorean theorem, first proven by Greek philosopher and mathematician Pythagoras, states that for all right triangles, the sum of the squares of the shorter two sides is equal to the square of the hypotenuse. The validity of the theorem has been proven in a number of different ways by several mathematicians after Pythagoras, including Euclid. Pythagoras' theorem is helpful not only within the confines of the study of geometry, but also in every day life and in many professions.

How do you find C in the Pythagorean theorem?

What is Pythagoras' theorem used for?

Pythagoras' theorem is used for finding the length of a missing side of a right triangle. It can be used to find a leg length or the hypotenuse length.

What is the formula for the Pythagorean Theorem?

The formula for the Pythagorean theorem is the sum of the squares of the two legs equal to the square of the hypotenuse. Mathematically, the formula is {eq}a^2 + b^2 = c^2 {/eq}, where a and b are the legs and c is the hypotenuse.

Measure of an Arc: Process & Practice

What is the Pythagorean Theorem? | Examples & Method

Apostrophe Concept, Rules & Examples | What is an Apostrophe?